When the retro-themed Royal Palms Shuffleboard Club opened last spring in Brooklyn, N.Y., it won over hipsters with regulation-sized courts, craft beer, trendy cocktails and food-truck dining. On another front, the bowling industry is undergoing an evolution, as smaller alleys close, giving way to larger, multi-entertainment venues. And bocce, once the province of elders from the old country, is gaining new cache at Millennials’ haunts.

Such old-school games — plus darts, ping pong, vintage arcade games and many more — are suddenly new again. They’re being tapped by a growing number of innovative operators to put a decidedly modern spin on the “eatertainment” restaurant concept.

Perhaps the games’ appeal is tactile over virtual, a real-life diversion from digital Angry Birds and Candy Crush on the smartphone. And unlike digital diversions, it takes two or more to play them, adding a vital social component. Then, too, you can play many of these games with a sandwich or a drink in one hand. These factors attract a young adult audience and seem to be hitting the bull’s eye with them.

“Restaurants and bars are venues for social gatherings, and what’s more social than engaging in a good-natured game with friends and family?” asks Annika Stensson, senior manager of research for the National Restaurant Association. “This is a particularly attractive proposition for younger consumers — also known as Millennials — as they tend to put premium value on social and interactive activities when visiting restaurants. From the operator side, adding gaming elements can also bring in business from local leagues that hold regular tournaments. Naturally, these types of additions won’t work for all concepts, but we are seeing a retro-chic gaming trend in some locations, especially in places that highlight bar areas.”

These concepts take up a lot of space and the design challenge in adding games to the mix is to keep both sides of the dining and entertainment equation happy, mitigating noise concerns on the restaurant side while providing a vibrant game experience and easy access to great food and drink. With the right combination, however, these operators appeal to a wide range of customers and cater events as diverse as corporate team building, weddings, family outings and weekly league play. Here are three that are staking out this territory. 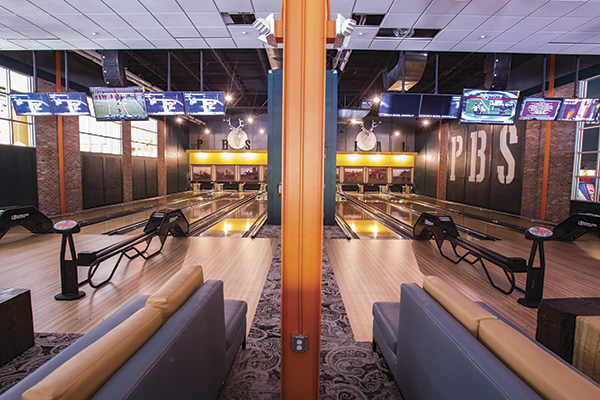 While the gaming options differ somewhat from one Punch Bowl Social location to another, bowling is always part of the action.“Punch Bowl Social is both forward-thinking and retrospective,” according to founder and CEO Robert Thompson. “The goal is to create an experience where we celebrate modern gastro fare and craft drinks, while celebrating the times when life was simple and good.”

Thompson and his team opened the first Punch Bowl Social in Denver over two years ago, tapping into the modern eatertainment trend. Owned by Denver-based Seasoned Development, which also operates one-offs Argyll and Griffin, there are currently four Punch Bowl Social units, in Denver, Portland, Ore., Austin, and Detroit, with six more locations slated to open over the next two years.

Each unit is different; a gutted, refurbished space, a build out in a new space and an historic location, for example. And while the game selection might vary somewhat from unit to unit, all include bowling and karaoke.

Decor follows what the company calls a “dirty modern” style, which blends industrial, Victorian, mountain lodge and modern design elements. Typically, the restaurant/entertainment venues have a footprint of 24,000 square feet. Kitchens average 3,000 square feet and dining rooms seat about 175, but guests can enjoy food and drink anywhere in the facility.

Food and beverage accounts for about 85 percent of sales, while gaming garners 15 percent, according to Thompson. Guests pay by the hour for the games; bowling costs about $5, for example.

The dining-entertainment package appeals to socially-minded Millennials. However, lunch attracts business professionals and older customers, according to Thompson. In the evenings, Punch Bowl Social transitions into a late-night, younger crowd. “We do a lot of private parties around the games, which also helps drive more food and beverage [sales],” he notes. +

“I wanted to go back to the future, and provide a comfortable environment for people to gather and enjoy themselves,” says Dale Schwartz, CEO of Pinstripes Bowling, Bocce, Bistro. “The idea was to redefine entertainment in dining.” 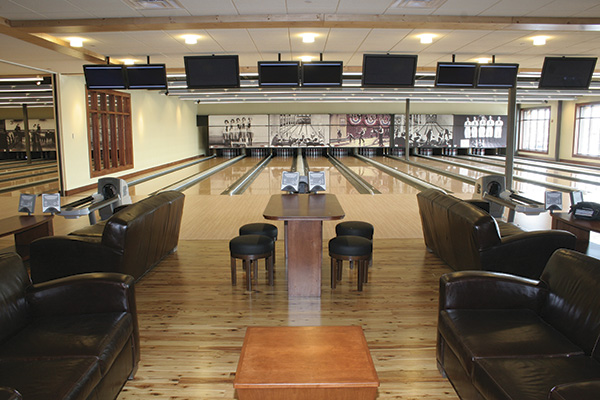 Pinstripes is a six-unit restaurant and banquet concept that offers bowling and bocce as part of its entertainment package.Schwartz founded Pinstripes in 2006. Currently there are six units: three in the Chicago area and one each in Edina, Minn., Overland Park, Kan., and Washington, D.C. More locations are under contract to open in the next two years around the country, says Schwartz, citing Dallas, Boston and Cleveland as expansion markets.

At Pinstripes, guests can enjoy games of bowling and bocce, and a year-round outdoor patio and fire pit. Live music is often part of the weekend entertainment mix. Facilities include a restaurant plus event space and party rooms capable of accommodating from 20 to 600 guests.

Pinstripes serves as both a destination and drop-in occasion, says Schwartz. People will stop by for a drink or to play a game or make reservations for dinner or a private party. “We attract and cater to a wide spectrum of guests — couples, groups of friends, families, children, grandparents, league players,” comments Schwartz, “and we host a lot of corporate events.”

Although there is a separate bistro dining area, guests can order from the same food and drink menus anywhere in the venue. And this is not ordinary alley fare. The menu encompasses appetizers such as Ale Mussels & Shrimp; soups, salads and sandwiches, such as an Open-Face Grilled Salmon; pizzas and pastas, and chef specialties such as a Filet Mignon Trio and Italian Jambalaya Risotto. An international wine list, craft beers and handcrafted cocktails complement the cuisine.

“We are a restaurant and banquet facility with bowling and bocce; not a bowling-bocce venue with food, which is a subtle but meaningful difference,” says Schwartz.

Every location differs slightly in terms of layout. Most of the venues run 30,000 to 34,000 square feet. Some locations also feature substantial outdoor patios.

Gaming consumes about 25 to 33 percent of the interior space. Pinstripes addresses noise issues with sound-dampening materials and by separating game sections from dining areas. However, sightlines are engineered to connect and engage customers. “There are plenty of one-dimensional dining experiences and ample one-dimensional bowling or gaming establishments,” concludes Schwartz. “The challenge as well as the opportunity is to marry the two, and do it well.”

“If we didn’t have bowling, bocce and arcade games, we’d be just another restaurant. This is a platform to differentiate the experience and take advantage of the square footage,” explains Michael Auger, a managing partner at Agoura Hills, Calif.-based Trifecta Management Group, which opened Plank on Jack London Square in Oakland last October. 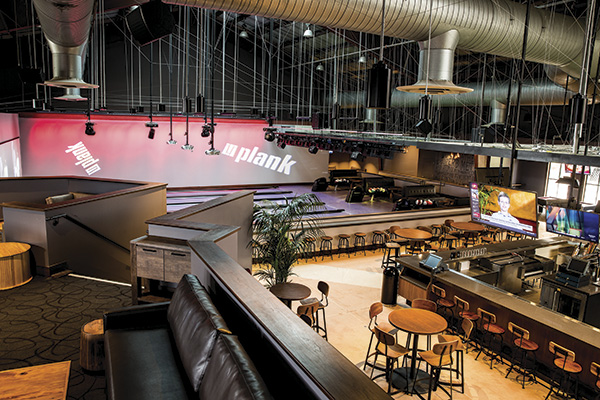 “We’re talking about a lot of space here, with a peak capacity much larger than a traditional restaurant, which gives us the possibility of really driving top-line sales on Friday and Saturday,” points out Auger. About 80 percent of income comes from food and beverage, even though it occupies less square footage.

“We look at our entire facility as one big dining room,” notes Auger. “There is waiter service at the bowling lanes; it’s a dining experience in a non-conventional setting.” Shared plates include chicken yakitori, ceviche and short ribs. Guests who are interested in larger entrees can choose from dishes such as ahi tuna tacos, various burger selections or hearth-oven pizza.

Plank attracts a range of customers, depending upon the time of day and day of the week. Weekdays see a business crowd come in for lunch or after work, grabbing a bite to eat and getting in a quick game of bowling or bocce. Corporations host meetings or celebrate events, from product launches to retirement parties. And guests can catch the latest sports action on the giant projection screen at the end of the bowling lanes and the 40 HDTVs scattered throughout the venue. Plus, the Boardroom offers private bowling alleys, sofa seating and a lounge area for parties and corporate gatherings.

On weekend afternoons, Plank attracts a blend of families, couples and tourists — Jack London Square nearby is the attraction. As day wears into evening, the crowd evolves toward the young adult side. Indeed, customers have to be over 21 after 9 p.m.

Working with a repurposed building posed limitations and advantages as to the layout, says Auger; the kitchen, prep and storage areas were located near the pre-existing loading dock, for example. The bowling lanes butt up to a big glass wall that can be opened up like an accordion door, offering bowlers a view of the beer garden and the Bay.