Cheesetique owners Jill and Jeff Erber didn’t have to think long or hard when their landlord offered to foot the bill for moving the business to a larger spot in the same development. A national pharmacy chain tenant wanted in, and the landlord needed the Cheesetique space to combine with others in order to make it happen. The retail shop and restaurant, where cheese, charcuterie and wine star, had opened at the mixed-use Village at Shirlington in Arlington, Va., in 2011. Business was good, but the space was small and due for a refresh. As the Erbers had evolved and grown into their concept, having a larger footprint might finally allow them to realize what they envisioned for the brand. 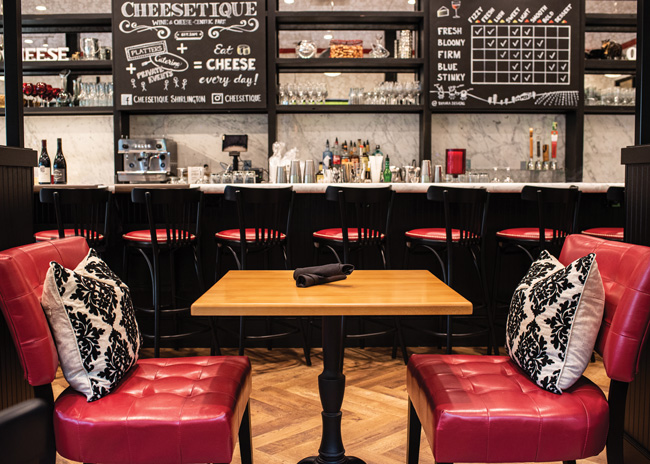 A row of two-top tables with generously sized, tufted red leather chairs and booth-style dividers runs down the center of the room, across from the bar. Images courtesy of Meghan LaPrairie Photography

Founded in 2004 as a tiny, retail-only cheese shop near the couple’s home in Alexandria, Cheesetique had matured into a unique, hybrid retail-foodservice concept. In 2008, the couple moved the original shop to a larger space down the block, adding a small cafe seating area. The idea was to enable customers to sit and enjoy a cheeseboard and a glass of wine. That idea quickly developed into a simple but full-fledged restaurant element offering cheese-centric fare and an extensive wine list. That’s the model they brought to market when they expanded in 2011.

Fast forward six years, and the landlord’s request to relocate Cheesetique presented an ideal opportunity to take the brand to the next level. The Erbers seized it and, for the first time since launching the business, were able to bring in professional design and construction partners to help.

“We had learned a lot over the years, but when we first expanded to Shirlington we were still novices,” says Jill Erber, who serves as owner-operator and “cheese lady.” “We did everything ourselves. We didn’t use an architect, except for the most basic required drawings to get a permit. I handled design and general contracting. It all went well, but this time we could invest in professional partners and that was very, very exciting.”

Also exciting were opportunities that the new, 3,125-square-foot space presented to optimize flow between the brand’s retail and restaurant elements, to let Jill more fully develop programming around educational cheese and wine events and private functions, and to provide much-needed storage and office space in the location’s 4,225-square-foot basement.

Though it had been shuttered for a couple of years, the location had previously housed a full-service deli/diner-style restaurant. It had some back-of-house infrastructure in place and a lot to offer in terms of aesthetic possibilities. The original 2,100-square-foot Shirlington Cheesetique site was long and narrow with limited natural light; the new site is spacious and light, with high ceilings and windows on two sides. There’s room for private dining/events and twice the amount of seating, a wine bar, enhanced front-of-house retail displays and large kitchen with separate dish area.

“It was leaps and bounds beyond what we had gotten used to,” Erber says. “It was a beautiful space; we had no reason not to agree to make the move. We worked with the landlord for a while to iron out the contractual details and started the permit and construction process in early 2019.”

Despite the fact that the new space had operated as a restaurant, a complete interior demolition was required in order to begin its conversion. Architecture and design firm //3877 and Wallace Construction & Consulting were brought in to lead the effort.

“We stripped it down to the concrete,” Erber says. “The mechanical systems had been in there for 30 or 40 years, so everything needed to go. We replaced the electrical, all of the plumbing, all of the HVAC, everything from the suspended ceiling got ripped out.” 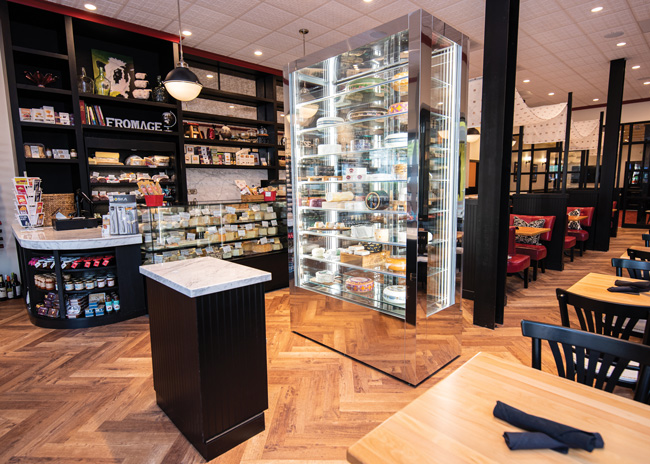 A retail area, cheesemonger station and host stand backed by a freestanding display cheese cave are positioned right up front, creating flow and synergy between the brand’s retail and restaurant elements.

With a clean slate with which to work, //3877 principal Dave Shove-Brown says crystalizing the vision for the brand was the first step. “This was the first time that Jill was able to think about her operation from the ground up. We were able to say, ‘OK, we know where the hoods are — we’re not moving that stuff. But the rest of it, let’s really decide: What’s the vision? How does the retail work with the restaurant component? How do they weave together?” he says. “Usually, folks who want to do both of those elements together scare me: They’re a little like Two-Face on Batman, not sure which they are and therefore they’re neither. But Jill’s really good at understanding how retail can support the restaurant and vice-versa.”

Rather than physically separate the two elements, creating seamless flow and synergy between them was a schematic design priority. Erber and the team at //3877 settled on a plan that showcases a retail area with counter window seating, cheesemonger station and host stand backed by a freestanding display cheese cave right up front. It’s a layout that gives shoppers and diners alike easy, welcoming access right upon entering the space. The cheesemonger station, positioned along the building’s east wall, features glass refrigerated display cases, a marble counter, back-bar shelving and chalkboard panels that glide to reveal or conceal TV screens. It leads farther down that same wall to an 11-seat bar.

Directly behind the cheese cave, a row of two-top tables with generously sized, tufted red leather chairs and swagged drapery above runs down the center of the room. Additional loose dining tables and chairs line the room’s west wall and, when weather allows, a covered pedestrian walkway along that side of the building holds sidewalk cafe seating, as does the building’s front sidewalk area.

Two private dining rooms sit at the back of the space. The largest of those is visible behind glass walls and doors that can be left open, making it feel like part of the main dining area, or closed during private functions or educational events. For a slightly different experience than the front of house, it’s carpeted, has coffered ceilings, banquettes along two sides and a collection of whimsical cheese-centric art, including a large print of Napoleon crossing the French Alps astride a Holstein cow.

An additional private dining nook seats eight. Tucked around the bar’s back corner in a hallway leading to restrooms and the kitchen, it was made possible thanks to the redesign of the back of the house. “We were able to rethink some of the locations of equipment and flow in the kitchen. The previous restaurant had a pretty odd set-up,” says Shove-Brown. “We condensed it, made the flow more efficient and gained some space, which allowed for that secondary private dining feature.”

Of the open layout overall, Shove-Brown adds, “We didn’t want it to feel like you were going into a store that had a restaurant attached, or a restaurant that had some extra space that was made into a store. We wanted the line between the two to be blurry. When you’re standing in the entry retail area, you can see dining, you can see the bar and the private dining area in the back. When you’re dining, you can see the activity in the retail section and watch the cheesemonger servicing retail customers or putting cheese plates together for restaurant service.” 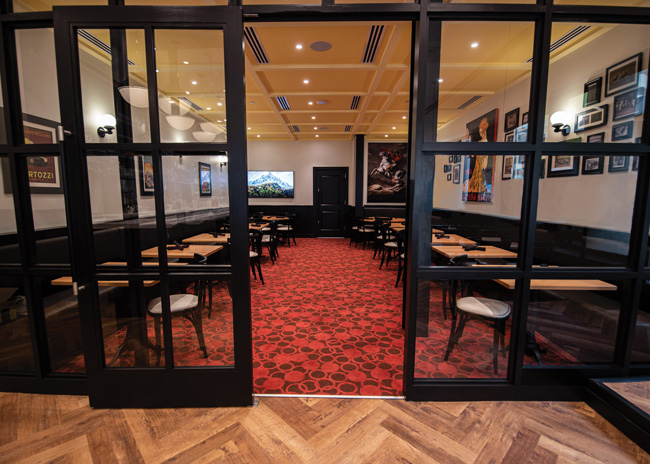 The private dining area is visible behind glass walls and doors.

With existing Cheesetique stores in play and a familiar brand presence in the Alexandria marketplace, the design team set out to maintain its fundamental look and feel while taking full advantage of opportunities the new space presented to create an elevated experience. Its high ceilings and abundance of natural light alone were instant upgrades, says Eber, who describes the brand’s aesthetic as old-world European cheese shop/bistro but with modern touches.

“Something as simple as having so much more natural light made a huge difference in how we’re able to present our merchandise and our dining areas. It was really transformative,” she says. “We still have a cozy feel but it’s also much more open, airy and spacious. And in addition to high ceilings and more natural light, we used some lighter materials in this location, which also helped to elevate the look and feel.”

Flooring in the main portion of the shop/restaurant features varying light shades of easy-to-maintain wood-look tile set in a classic herringbone pattern. “We had a dark antique wood finish on the floor in our previous space. This still has an antique feel to it, but it’s brighter,” Erber notes.

A light touch was used on the ceiling, as well. There, the team swapped what had been black, pressed-tin-look ceiling tiles in the previous location for a cream-colored version of the same material. “It looks like old-fashioned pressed tin, but it’s a wafer-thin, lightweight synthetic material,” she says. “If there’s a fire, the tiles crumble and dissolve so that the sprinklers can do their thing. They also have wonderful acoustic properties and you can cut them with scissors to work around light fixtures or wall contours.”

Between the lighter ceiling and floor, the designers hit cozy notes with dark, espresso-toned millwork and furniture, natural wood tabletops and eclectic light fixtures including custom pendants over the dining tables that resemble high-end cheese graters. The only pops of color are the red leather chairs in the room’s center and barstool seats.

“That upholstery choice was an homage to a very cool seating area with a bright red love seat that Jill had in the previous location,” Shove-Brown says. “All of the other colors in the space are muted, dark or natural. The materials are things you see a lot, but they’re well connected and nicely detailed. The bar top is marble, for example, but it’s got some girth and a beautiful rounded edge to it. Wallcoverings are simple and clean. The millwork is really well done and the floor is laid in an interesting pattern. So, while the materials themselves are familiar they’re detailed to feel timeless and classic. The whole idea was to provide a setting that accents and sets a backdrop for the beautiful cheese and wine.”

To that end, wine displays line the front retail area and glass cases put Cheesetique’s broad array of specialty cheeses center stage, making the products part of the decor and further weaving the retail and restaurant
elements together.

Erber’s favorite design element, the tall glass cheese cave, is the pièce de résistance. “It really embodies what we do at Cheesetique, which is to present cheeses and charcuterie foods that are delicious but also beautiful to behold and that should be appreciated with all of the senses,” Erber says. “I had picked it out before we even started the design of the new space and knew right where it needed to go. We designed everything else around it.” 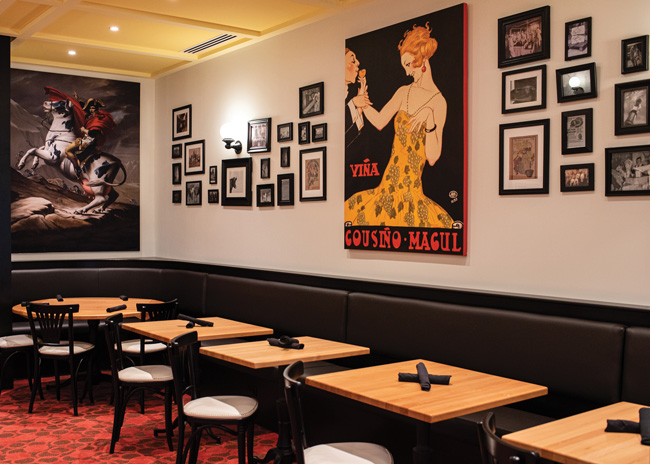 A large room behind glass walls at the back of the dining room can be left open or closed off as needed for overflow, educational events or private functions.