Restaurants incorporate new kitchen equipment all the time. It’s not often, however, that a single piece of equipment transforms a chain’s entire operation and customer experience.

That’s the case with Firehouse Subs, though. This 1,100-unit sandwich chain based out of Jacksonville, Fla., recently introduced a custom steamer to its production line. That single change allowed the chain to redesign its entire kitchen, workflow and even the way customers move within the space. The end result is an entirely new design that Firehouse has dubbed its “Restaurant of the Future.” 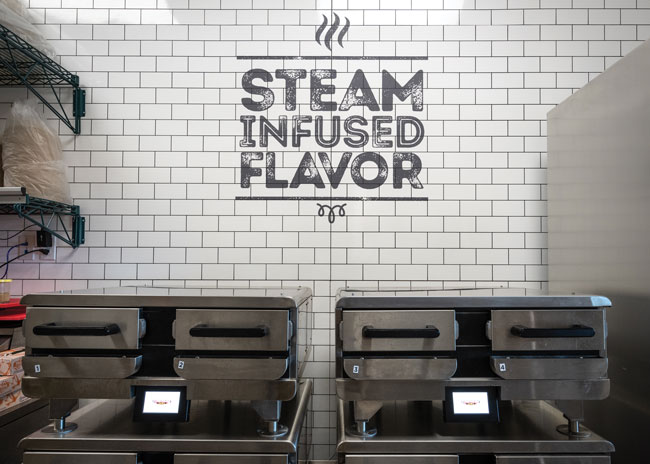 Many Issues, One Solution

In truth, there were a lot more reasons to redesign than just a steamer. According to Firehouse Subs CEO Don Fox, while the chain had tweaked its look, it hadn’t done a full-on redesign in its 25-year history. An update was simply due.

At the same time, there were other factors in the restaurant industry and specific to Firehouse that needed to be addressed.

The most obvious was the industry-wide shift toward off-premises dining, Fox says. Firehouse has seen this in its own sales, which have gone from 38% off-premises in 2012 to 53% today. This change means its restaurants can be smaller (and hence cheaper to build and operate) but should have the infrastructure to support online and delivery orders.

A redesign was also called for because Firehouse’s previous look wasn’t communicating the chain’s mission-driven nature.

These facts weren’t communicated by the previous design, though. While the Firehouse theme came through loud and clear, the space became cluttered with too many themed elements and too many messages.

“[There were] a lot of historic photographs, many things that drew people’s attention, and as a result, the key messages that we wanted to communicate were getting lost. We saw that in some of the research, both qualitative and quantitative, that we did,” says Fox.

Finally, there were issues with customer flow and speed of service the chain wanted to address, both of which traced back to Firehouse’s previous kitchen design. 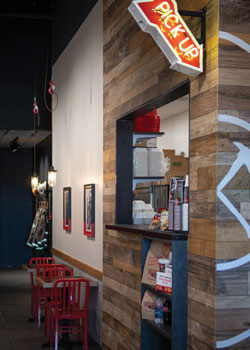 The new design includes a pickup window and built-in shelves for online/third-party orders. The chain put in a full-height wall past the window to hide storage, the ice machine and other kitchen elements.Kitchen to Customer

Firehouse is known for serving hot subs heated with countertop steamers. In the chain’s prior kitchen design, it used eight small clamshell-style steamers placed along 16 feet of table.

Working with a manufacturer, the chain has developed a new drawer-style countertop steamer that is stackable. As a result, Firehouse now needs only 8 linear feet for its steamers. This reduction allowed the chain to rework its entire kitchen workflow, reduce steps and cut the size of its production area by nearly 200 square feet.

This, in turn, enabled Firehouse to implement some major changes to the layout of its ordering line and dining area.

In both the old and new designs, Firehouse operates a vertical kitchen, with the production line running along a side wall rather than the back wall.

In the previous setup, the POS station was located on the far end of the production line, requiring guests to walk down and form a line parallel to the production line. This could lead to several issues, says vice president of Real Estate Services John Namey. New guests sometimes found the process confusing, and during high-volume times, the line’s location could be unclear. Additionally, due to the line location, people in the queue comingled with guests sitting down to enjoy a sandwich as well as others guests that were standing in wait for their food.

With the new, smaller kitchen, Firehouse was able to relocate the POS station so it’s essentially the endcap of the production line. “We moved the registers to the front. We have a freestanding POS station with the menu board above it. Because the steamers don’t take up as much room, that allowed us to move the line back and the POS to the front,” Namey says. This shift has allowed the chain to set up a much more natural flow for customers.

First, against the front wall, is a display of actual pickle buckets painted red. The chain sells pickle buckets for two dollars each, with the proceeds going to Firehouse Subs Public Safety Foundation. The empty 5-gallon buckets, notes Namey, are especially popular among workers in the trades. While the buckets in this display are not for sale, this design element helps communicate the chain’s mission-driven aspects.

The chain’s mission is highlighted even more with a vinyl wall covering to the immediate right of the queue area. The vinyl piece serves to educate guests about Firehouse Subs Public Safety Foundation with an LED installation that spells out “Give Back” and “These Subs Save Lives.”

When guests arrive at the ordering counter, they find more racks below the counter itself and a refrigerated display case that sits between the registers. Here, the chain offers bottled drinks and is piloting a new offering, cold to-go subs.

Immediately behind the registers, guests can look through a doorway into the production line. The walls on each side of the doorway are clad in a wood-style vinyl wall covering. One section of wall has a classic firefighter’s logo (the Maltese cross) along with a running count of how much the chain’s foundation has donated. The other has a lightbox displaying limited-time offerings, which previously were advertised through window graphics. “We removed them from the window. We wanted to keep these storefronts clean. Whatever we have going at the time, that’s where it will be,” says Namey.

After ordering, guests get their drinks from an upright soda machine offering multiple sodas and flavorings. Previously, this machine was red but the chain switched to a silver version. “We are trying to take some of the red out,” Namey says. “Our other restaurants are awash in red, if you will. We wanted red to become more highlights in the restaurant.” 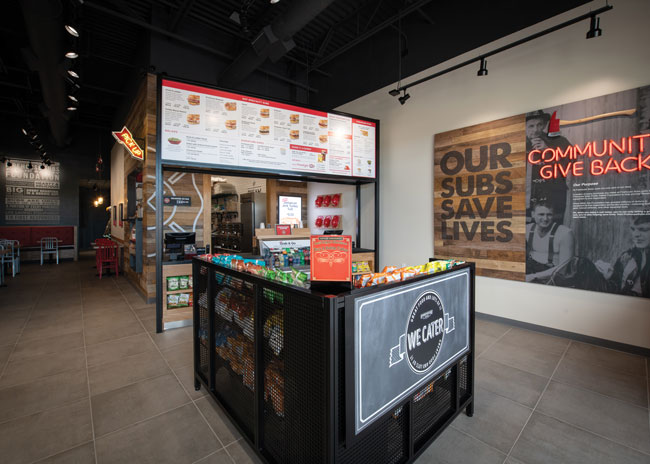 By shortening the kitchen, Firehouse was able to simplify its ordering process. A chip rack now creates the queue area that feeds to a freestanding POS counter.

After getting their drinks, guests have a choice of several seating options. Toward the front window is a community table for six or eight (depending on the size of the store) made of white oak. This table, along with all the tables in the restaurant, has a combination of different chair colors and styles, making the restaurant less QSR in style and more relaxed, Namey says.

The middle of the restaurant offers a handful of freestanding two- and four-tops, while toward the back is a small banquette with red vinyl upholstery, offering a casual-dining experience to guests who want to do more than eat and run.

No matter where they sit, guests in these areas will find wall decor that communicates the Firehouse Subs brand clearly and directly. These include a photo collage of historic firefighter images by the community table, a painting of firefighters at work (created custom by the same artist for each location) near the floating tables, and a vinyl wall covering text mural above the banquette explaining how purchases at Firehouse Subs support its foundation.

After getting their drinks and choosing their seats, diners won’t have to wait long for their food. Thanks to the more efficient kitchen workflow of the new design, the average time for team members to produce a sub has been cut by a full minute.

Finished subs are retrieved from a window on the side of the production line, not far from the POS station. To the right of the window is built-in shelving for holding online and third-party delivery orders.

“Before, [the rack] wasn’t built in. We created something with mobile racks. Now it’s all at the front with the cashier there. If there’s any need for a cashier, any interaction with a customer service person, we’ve got somebody right there to handle it,” Namey says. 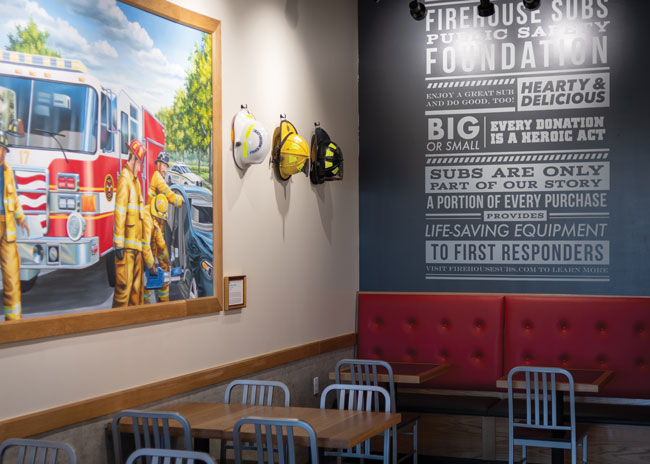 The painting and text mural are highlights of the chain’s simplified art package. Both communicate the brand clearly, with the mural focusing on Firehouse’s charitable arm.

By early fall, Firehouse’s new kitchen had been rolled out in two locations. One of those stores, a company-owned location in Jacksonville that opened in July, has the full new redesign.

As part of the evaluation of this new restaurant, Namey is looking to make improvements at the margins. The text mural above the banquette, for instance, may be converted from a painted wall with vinyl overlay covering to a printed wallpaper, which would be cheaper when factoring in labor.

Another change involves the queue area/POS. With a chip rack essentially forming the queue line, the second rack built into the POS counter will likely be eliminated going forward.

“I think the chips in the metal rack are sufficient. That space can be used as storage for the POS counter from behind,” says Namey.

The chain, adds Fox, will also look at elements like lighting and finishes to find additional savings.

Overall, though, Firehouse needs a few more months to see how the store is performing before it makes any significant changes to the design or begins a widespread rollout. In the meantime, Firehouse will evaluate the performance of this new design. To evaluate the qualitative customer experience, Firehouse plans to conduct customer intercepts and dine-alongs in the new store with both new and existing guests. The chain, notes Fox, used these same methods to uncover customer pain points before the redesign.

The chain will also look at several quantitative metrics to evaluate its Restaurant of the Future. In addition to judging sales (which are very positive based on this one store, says Fox), the chain will look at its mix of on-premises and off-premises sales, speed of service and labor savings achieved with the smaller, more efficient kitchen.

What’s more, Firehouse also wants to get several months of work with this new steamer under its belt before rolling out the design to franchisees. Doing so before then would be irresponsible, Fox says.

“The layout of the kitchen is entirely dependent on the size of those steamers,” he says. “We’re still doing some R&D work to get them performing at a level we’re completely satisfied with, especially when it comes to the reliability. If we release that too early at random places around the country where there’s not a maintenance network set up for it, we could potentially have a real problem on our hands.”

Once it’s got a good sense of how the kitchen performs in the real world, the chain will decide whether and to what extent it will ask franchisees to implement the new design in existing stores. The change could include the kitchen alone, the dining room alone or some combination of both.

Another question is when the change should take place, notes Fox: at the time of franchisee’s contractually obligated upgrade or, if the change proves very successful, at some point before that.

“Is there a value to the brand and to the franchisee to go forward with converting existing restaurants on a schedule that’s in advance of their normal time frame? For that suggestion to be made or mandate to be given, my philosophy is you’ve got to be able to back up that decision with some good solid numbers,” he says. “We’re a long way away from making that type of decision. We have interest in our franchise community to do it proactively, but I would be remiss if I allowed them to at this point. We’ve got to be set up to support the new layout in the proper way.”