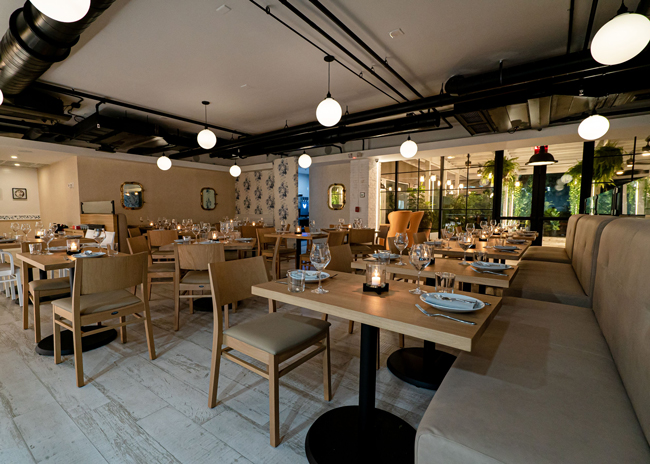 In many ways, says Beltran, Navé’s design is a counterpoint to his company’s flagship restaurant, Ariete, which is located just next door. Ariete has a wood-fired grill, specializes in steaks and features a much darker, date-night vibe.

Navé, on the other hand, is much lighter and brighter.

“The tones are more blue, gray and white, while Ariete is black, white and dark green. Ariete is wood finished while Navé is a painted wooden cream on a lot of things. Our goal was to build a dynamic between the two, so you could experience the absolute opposite of the spectrum, from food to the dining room itself. We wanted them to be very different,” says Beltran.

Specific features of the main dining room include hardwood tables and chairs and wood-style tile flooring.

The exposed ductwork prevents the space from becoming too monotone, though its presence is more due to circumstance than anything, Beltran says. “We put in an entirely new HVAC system as soon as we took over the space. The only issue with that is that we needed to have the ductwork exposed. There’s no way could lower the ceilings anymore, so what we did was we blended it in by painting it black.”


One of the feature spaces in Navé is its bar.

“It’s a backlit bar that really highlights the amazing selection of spirits we have,” says Beltran. “You can see at the end of the bar we have an exposed wine cooler. There was no place in our area that had a big beautiful bar where you could enjoy a cocktail, at least not indoors. That was something we wanted to make sure we added.”

Blue floral wallpaper near the bar adds a splash of color and a feminine touch to the space, notes Beltran. The bar itself features stools imported from Italy, a brass foot rail and a marble bar top. The bar face, meanwhile, is made of cane webbing that is backlit. The individual panels are framed in wood, making them easy to repair or replace should they get damaged by an errant foot. 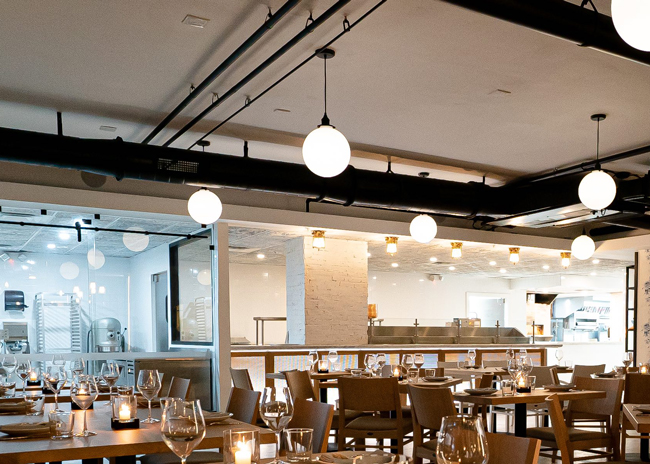 In addition to the bar, Navé has two other featured interior spaces: the pasta room and raw bar. These are located next to each other and are in full view when guests enter the restaurant. The raw bar is a smaller area but includes the same marble top and cane bar face as the main bar.

The pasta room features floor to ceiling glass windows and a sliding glass door. The room itself has a butcher block table where the pasta makers work, while the flooring is identical to the dining room, helping to connect the spaces.

“We wanted it to leave an impression. I think it definitely has, much more than I thought it would. A lot of people talk about it. They see someone making the pasta and as soon as someone makes the pasta it goes straight to the line and gets cooked,” says Beltran. 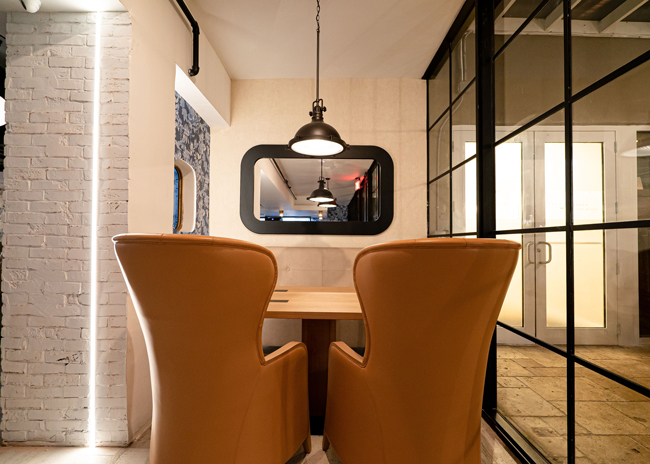 One of Navé’s more unusual spaces is a table featuring two captain’s chairs. The space, says Beltran, was a nook in the floorplan that needed to be filled. After considering other options (including an extension to the bar) they settled on a dining table that can seat four to five.

A mirror on the wall keeps the space from feeling too confined while a porthole-style window to the left gives guests a peek into the rest of the dining room.

Navé is more than its interior space. The restaurant also features a large outdoor patio, located right next to Ariete’s patio.

The space features an overhead trellis and plenty of plants, contributing to its already relaxed vibe.

“Where we’re located in the Coconut Grove area, it’s almost like a small town in a big city,” says Beltran. “That patio offers a totally different experience than in a lot of parts of the city. You don’t get crazy noise from city driving, you get this very quaint, small town vibe in this beautiful patio with lots of foliage. I think that patio is one of the most important features of this entire property.”