Co-owned by husband and wife team of Dario Monni and his wife, Jill Gray, Chicago-based Tortello is designed to celebrate pasta and the pasta making process.

According to Gray, the restaurant is a passion project of her husband in particular, a native of Italy, whose family included butchers, shepherds and even a specialty food shop owner.

“The goal of Tortello was to create the modern version of the Italian pastificio [fresh pasta shop] and really preserve these old traditions that are unfortunately dying out with the generation above,” Gray says 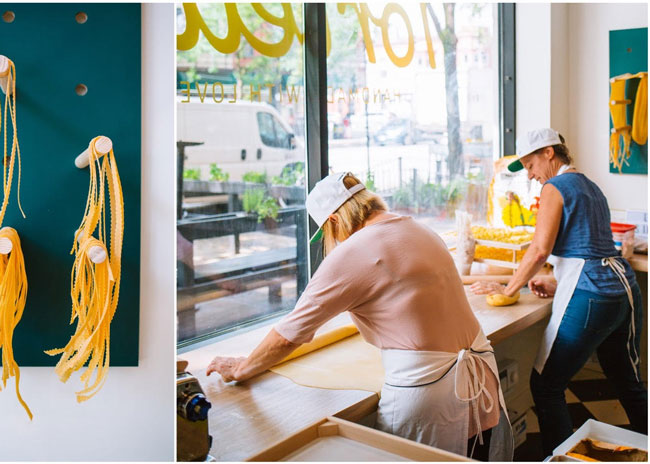 With pasta making at the heart of the concept, it’s no surprise that the design gives the pasta-making station pride of place. This station is located at the front of the restaurant, directly against the front window.

“As people are walking by, they cannot help but stop and watch the pasta being made...Why keep it in the back? We’re making everything from scratch by hand with incredible ingredients,” says Gray.

For those who come in for a meal can get a pasta show, too. Behind the pasta station, the designers placed a bar with a handful of seats, allowing guests to enjoy the show while enjoying a meal.

The space also turns some necessary tools of a pastificio into design elements themselves. Many fresh pastas, for instance, need to be dried on pegs after they’re rolled and cut. The design firm, Siren Betty Design out of Chicago, created a pegboard with a teal board for hanging and drying pastas. 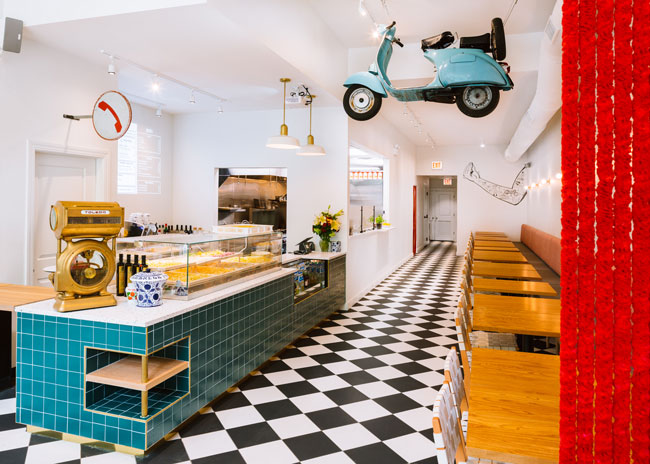 The choice of teal for the pegboard was very intentional, says Gray. Green, red and white are the colors of the Italian flag, so Tortello’s designers used teal (representing green), red and white prominently in the space, but not in an obvious manner. “You’ve got the red, white and green of Italy without feeling like you’re getting hit over the head,” says Gray.

In addition to the pegboard, Teal can be found on the face of the ordering counter, white in the walls and checkerboard tile flooring, and red in the curtain hanging curtain with multiple sections, a common design feature in Italian homes that’s designed to block the sunlight but let the breeze in.

Other Italian-centric elements play a big role in the design, including the vespa hanging from the ceiling and the telephone sign on the wall, an image native Italians will immediately recognize as the sign for a payphone, Gray says. 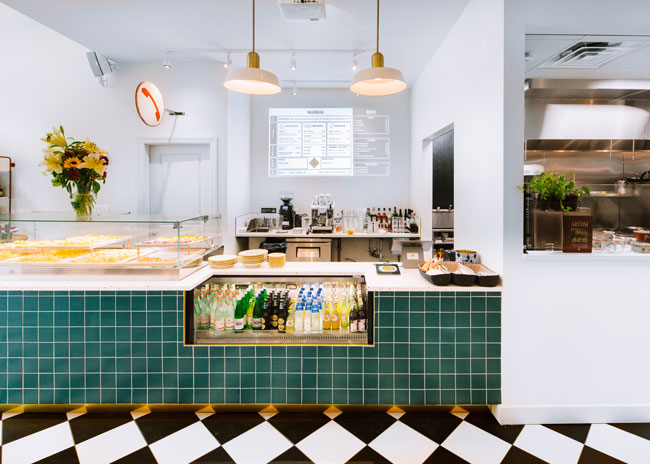 Just past the pasta-making station, Tortello has a hand-washing station that’s used by the pasta makers throughout the day. More than a basic sink, though, the station is designed with a brass-colored fixture and a blue-trimmed basin.

“Our pasta makers use that all day long. Practically, they need a sink there and aesthetically, we wanted it to feel like part of the space,” says Gray.

Next to that is a small retail area located between the counter and pasta-making station. This space features olive oils, vinegars and other specialty foods from across Italy. This offering was inspired by Monni’s grandfather, who owned a specialty food store outside of Venice. The brass-colored Toledo scale to the right of the retail display is similar to the one in that shop, Gray notes. 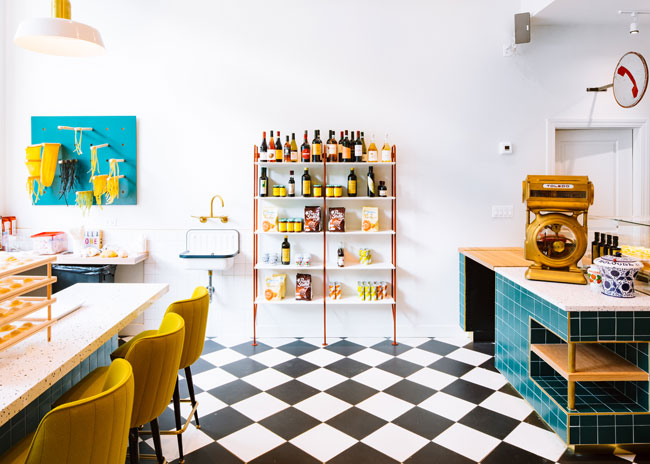 Tortello’s retail offerings continue at the ordering counter, where fresh, uncooked pastas are on display behind a glass container on the terrazzo countertop. These can be ordered for a meal or purchased by the pound to take home, along with a jar or sauce produced by tortello. Instead of a static or even electronic menu board, the restaurant projects its offerings directly on the wall. According to Gray, this allows the operators to easily change the menu as new fresh pasta rotate in and out.

The kitchen, meanwhile, sits just past the ordering counter and is completely open, matching the pasta-making display.

“We wanted to be totally transparent. Everything we’re doing is from scratch ...In Italy, everything’s got a little element of chaos to it. We wanted our kitchen to feel like part of our space, so that’s why it’s open,” says Gray. 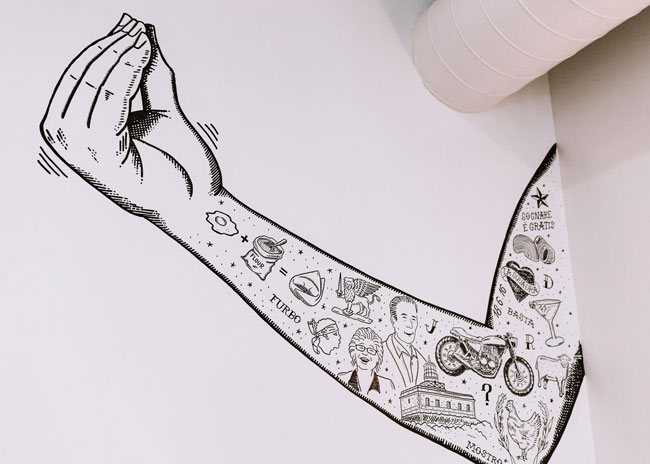 At the back of the restaurant, the designers added a mural that’s both very Italian and very personal to Gray and Monni. The mural depicts what Gray calls “a classic Italian hand gesture.”

The arm, though, is tattooed with several images laden with meaning to husband and wife team, including a depiction of the lighthouse where they were married, the initials of their children and an image of Monni’s grandparents. “Everything is a story of our life and his life and his dream...We loved to make the space feel personal, but we also wanted a modern twist,” says Gray.