Before and After: Horchata de Nueva York 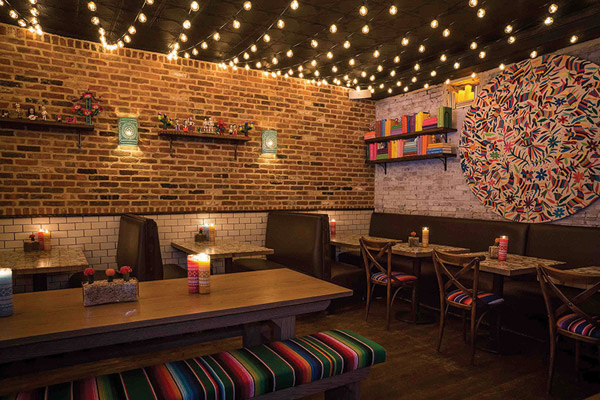 Multi-concept operator ESquared Hospitality pulled off a fast, economical conversion this spring when it retired its aging BLT Burger restaurant in New York's Greenwich Village to create Horchata de Nueva York, a warm and welcoming Mexican concept. "Over the past year or so a lot of burger concepts had opened in the neighborhood. As an eight-year-old restaurant, BLT was in need of a facelift anyway but we decided that rather than spend the money and effort to refresh that restaurant, we'd create a casual Mexican restaurant. We didn't have Mexican in our portfolio and it was something that was missing in the neighborhood," says Samantha Wasser, ESquared's creative director, who spearheaded the redesign of the 1,700-square-foot space. 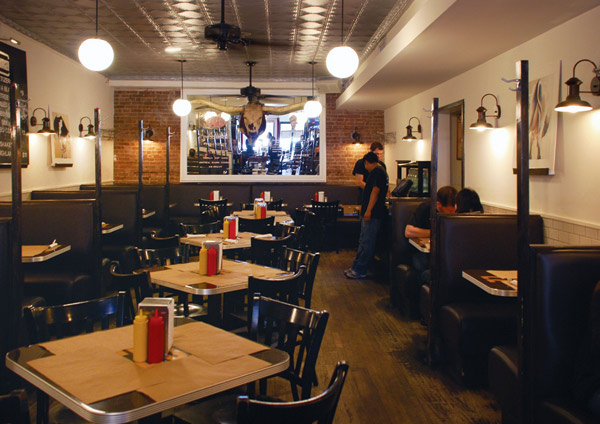 Before the conversion: BLT Burgers

Given a small budget, a mandate to leave existing banquettes in place, and less than two months to come up with a design and complete the project, Wasser focused on strategies that would warm up the space and create a comfortable, casual, authentic Mexican ambiance with a few quirky touches added for fun.

The existing hardwood floors were refinished. Stark white walls along the long sides of the dining room were covered in brick veneer, and metal sconces sourced from Mexico were installed. The back wall, which was already brick, was whitewashed — in part to mask the fact that it is a different brick than that added to the side walls and in part to create a more open feel for the space. The lower half of the walls, covered in white subway tiles, were kept the same but re-grouted. "We replaced the white grout with a dark, charcoal-colored grout to create contrast and soften the white a bit against the new brick walls," Wasser says.

Small freestanding tables in the room's center, between the banquettes, were removed and replaced with two custom-made wooden communal tables flanked by benches covered in vibrant Mexican fabric. The tables seat 10 to 12 guests each and are especially popular among the concept's Millennial clientele as well as for group outings.

The banquettes, which budget constraints demanded remain in place, were freshened with new wood tabletops imprinted with a white-out graphic pattern picked up from the Otomi Mexican tapestry hung on the back wall of the dining room.

Left in place, too, was the distressed pressed tin ceiling. But to create a festive, patio-style ambiance in the windowless dining room area Wasser had it painted black and hung strings of lights against it. Toward the front of the long, rectangular space — where a 12-seat bar sits along one wall — the ceiling was kept lighter to help create distinction between the spaces and "give each its own moment," she says.

The bar itself was completely redone to create a warm, comfortable feel and to highlight Horchata's extensive selection of tequilas and mescals. "I wanted it to feel like people had been drinking tequila here for 100 years," Wasser says. "We used more natural, reclaimed materials and warm, amber lighting. And we created a back bar from old wooden wine boxes lined with antique mirrors and fitted with LED lights to show off the beautiful bottles." 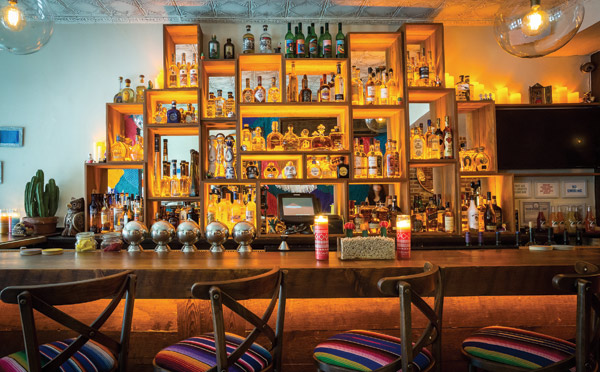 She adds that this was the fastest complete conversion that ESquared Hospitality, which operates nearly 30 steak, burger, seafood and Italian-themed restaurants domestically and internationally, has undertaken. "It was a whirlwind. We closed BLT Burger and three weeks later re-opened as Horchata," she says. "Customers have been amazed with the change and the response to the new concept has been great." +