Dining in the Streets 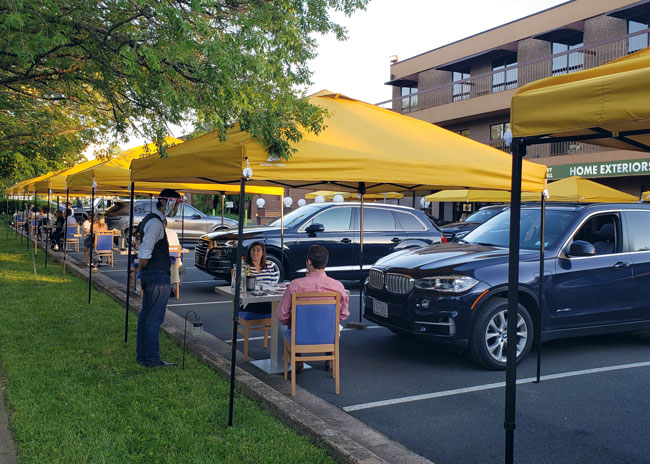 With medical experts deeming the coronavirus less transmittable outside, outdoor dining is likely to appeal to many consumers and help draw them back to dining out. To aid in that effort, cities across the country are closing down streets to allow restaurants to expand to the outdoors as they work their way back to normal service.

It’s not just closed streets that are helping restaurants restart. Other operators are commandeering parking spots close to their restaurant, side streets and even alleyways.

In mid-May, Jonathan Krinn started A Lot of Clarity — five-course prix fixe menus served out of the oversize parking lot behind his fine-dining restaurant, Clarity, in Vienna, Va. He’s booked through the middle of July.

Krinn turns his parking spaces, which are 9 feet wide, into dining areas akin to boat slips at a marina. Every other space is left empty, providing more than the requisite social distance. Customers drive into their spot, where a table for two is set up. It’s patio meets tailgating, he says. “We’ve all been home wearing sweats for eight weeks, eating takeout, so I wanted to give people a chance to dress up and dine out,” he says.

Krinn has 26 tables, each of which is covered by a small canopy (procured for $100 each at Walmart). Each table has two cushioned seats. All the furniture is pulled from inside the restaurant. It’s mostly couples coming to dine, he points out, “though you can do up to four people, and for them, we set up a double-size table.”

Kids and pets are welcome, too. Some parents open up the car and let offspring sit in the back with a pizza while they dine on the finer fare; one couple brought a dog bed and their pooch, Krinn says. He wants to make it as easy as possible for people to dine with him, especially these days when you can’t hire a babysitter. Once the guests arrive, staff bring a sanitized setup to the table, but guests are also welcome to bring their own.

A Lot of Clarity isn’t just functional — it looks nice, too. Krinn has strung little white lights in the trees, and tables are set with flowers and candles. He’d like to keep this going until cold weather forces him to close it down — until the end of September, at the very least. And he’d consider doing it again next spring, too, even if there is no pandemic to worry about, though he suspects there will still be effects from this one. “It’s going to take more than one season to get people back up on their feet,” he says. “So logically, you’d want to do this next year, too — at least two seasons.”

There are some obstacles to outside dining, Krinn admits, and he foresees the day coming soon when he has to buy mosquito nets and perhaps some personal fans he’ll brand with the Clarity logo. It’s not going to be as comfortable as many people are used to, he says, “so I’m informing guests before they come and on social media what commitments they have to make to adversity — that it’s going to be hot,” he explains. “The guests commit to these out-of-the-box offerings and go along with that. We’ve literally turned our restaurant inside out. But there’s only so much one can do.”

One challenge with outside dining and customers kept 6 feet apart is emptiness, says Dwayne MacEwen, founder and principal of DMAC Architecture in Evanston, Ill. “You need to try to get a sea of density without your exterior looking empty,” he says, suggesting using larger tables for two people rather than taking out every other table. He points out that this also solves the problem of where to store all the extra tables. He also suggests using planters and umbrellas to break up the space and using sidewalk signage as fillers. The boards can highlight what a restaurant offers and stand vertically. These can also be used, says MacEwen, “to bring out some of the branding from inside, to highlight menu items and to help activate the outside space.”

Owner Jose Salazar added some streetscaping elements to make a more hospitable atmosphere when adding outdoor dining to his restaurant, Salazar, in Cincinnati. There wasn’t much he could do about the barriers that signal a closed street, but he says customers are forgiving of these things given the circumstances. Jose Salazar owns three restaurants in Cincinnati: Salazar, Goose & Elder, and Mita’s. In early June, he opened outdoor seating at Salazar on a closed side street adjacent to the restaurant. Goose & Elder has a small patio but is expanding into a side street’s lane that has been closed down.

Salazar ordered five four-top tables for both of the restaurants with outdoor seating. He purchased these from a local distributor having a closeout sale. “We got them at about half price,” he says, “but I think they’ll have paid for themselves.”

It’s tricky to make outdoor dining areas look nice, Salazar says. For his eponymous restaurant, he shares the street space with another restaurant and a bar, so he built bamboo dividers and added planters with white lights on strings in between “to make them look nice,” he says, along with plants that “fall in line with the greenery and natural aesthetics we have going on inside the restaurant.” Unfortunately, the barriers closing down the side street are unsightly plastic, but there’s not much he can do about that. He’s also added canopies “that look like big wings” to block the sun and potential light rain from the tables, but he expects customers will put up with more than they usually would. “Folks are a bit more tolerant and say they’d rather sweat than not eat out at all,” he says.

Both restaurants will have a service station outside with supplies for frequent cleaning and sanitizing. MacEwen thinks stations like this are important messaging and essential to make customers feel safe. Plus, stations help fill space and keep customers apart. Having sanitizing stations and hand-washing stations everywhere — which can be branded with a restaurant’s colors and logo — reinforces the concept of cleanliness, he says. He suggests even carrying this over to the bussers in full-service restaurants. “Make the busboys stand out, and make it clear they’re cleaning,” he says. Restaurants could even add a phrase to bussers’ T-shirts: Chief Sanitation Officer, for example.

Chain restaurants are also doing what they can to open up with outdoor dining. Beef ‘O’ Brady’s has launched outdoor tents in the parking lots at several of its franchised locations. One store, in Marianna, Fla., has rented a gigantic tent, around 60 square feet, and set it up in the parking lot. Sales have been approximately double what they were before the pandemic hit, says chief operating officer Scott SirLouis. Consumers are desperate to get out and eat, he says, “and by increasing his seating, this franchisee is now the largest restaurant in his small town. He’s created a lot of buzz with the tent on social media.”

Most other locations, SirLouis says, are in neighborhood shopping plazas so the tents are erected in parking lots in front of the restaurants or off to the side for endcap locations. The biggest challenge, he says, has been working with landlords “and keeping a good relationship with them — pushing the envelope with them but at the same time getting as much seating as we can. For the most part, the landlords have been very cooperative.”

At one location, in Winter Haven, Fla., Beef ‘O’ Brady’s has been enjoying particular success. The franchisee, Lou DeLeo, runs Wednesday night tailgate trivia under a 40-foot-by-20-foot tent in his parking lot. Guests back their trucks around the canopy-style tent and participate from their cars or sit at appropriately distanced tables in the tent. They order food through servers with handheld POS terminals, and the restaurant has beefed up its technology to ensure Wi-Fi coverage.

“We’re a brand that embraces creativity in our franchisees,” says SirLouis. “We like them to be embedded in their community and want to give them the flexibility to do what attracts people.”

Since Tailgate Wednesdays began, sales have been strong — up double digits over pre-Covid-19 sales when trivia was held inside. In fact, says SirLouis, the company is looking at whether outdoor trivia is feasible at other locations and thinks it could stick around once the pandemic is over.

The first week of trivia, 4 teams participated, but within four weeks, it was up to 16 teams, says DeLeo. He’s used his exterior electronic billboard and social media to get the word out, and it’s grown organically, he says. The trivia customers are mostly regular guests, but it’s drawn a lot of new participants during the pandemic, who DeLeo expects to become regulars.

MacEwen expects to see more restaurants making moves outside. “There’s such a pent-up demand to get out of the house and go anywhere,” he says, and he expects this to lead to customers willing to put up with some discomfort that wasn’t previously tolerable.

However, expecting customers to rough it is not likely to entice them in the long term. It’s important to provide the basics like umbrellas for sun protection as well as to brighten up and brand whatever outdoor space is available. MacEwen expects barriers to be added in an architectural format “as these spaces become an extension of the dining room.” These will be “design elements that aren’t Band-Aid fixes like plexiglass barriers, but more built-in. Providing shade and shelter will be important, and I imagine the supports and design of such structures will be stylized to also serve as a barrier,” he says. “I think this is an opportunity to invest in the outdoor experience that will remain relevant long after a vaccine is — hopefully — developed.”

Outdoor dining options may prove to be irresistible to American consumers desperate to leave the monotony of their homes and cooking for themselves — even if that means they have to weather some ups and downs. 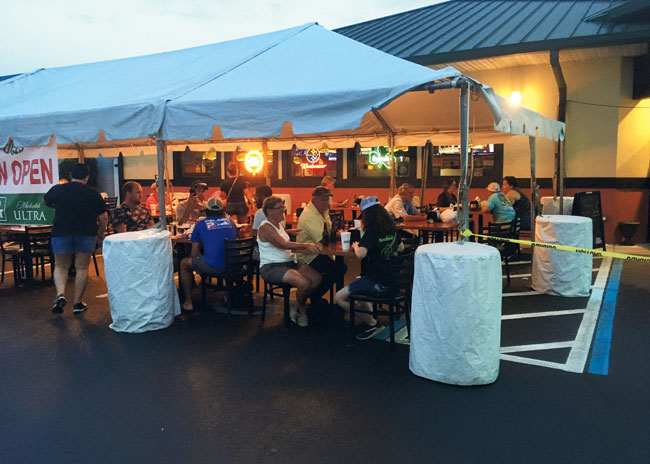 Beef ‘O’ Brady’s added outdoor tents in the parking lots of several of its locations. One location in Winter Haven, Fla., has seen particular success with outdoor trivia nights.

Dwayne MacEwen, founder and principal of DMAC Architecture in Evanston, Ill., expects to see controlled pathways to restrooms inside restaurants with signage and graphics communicating the way.

“This allows the servers to control density and access and eliminate queues,” MacEwen points out. These bathrooms, he believes, will become increasingly hands-free, with automatic doors, faucets and flushes, as well as wipes at all exit points. Another option is bathroom trailers, but he thinks using existing bathrooms is the better option.

At Beef ‘O’ Brady’s locations, guests use the restrooms in the restaurants. “We have hosts at the door regulating how many people are allowed in at any given time,” says COO Scott SirLouis.

For A Lot of Clarity events, Chef/Owner Jonathan Krinn provides access to bathrooms in the office building above his restaurant Clarity. “Servers escort our guests there to ensure they don’t get too busy,” he says.