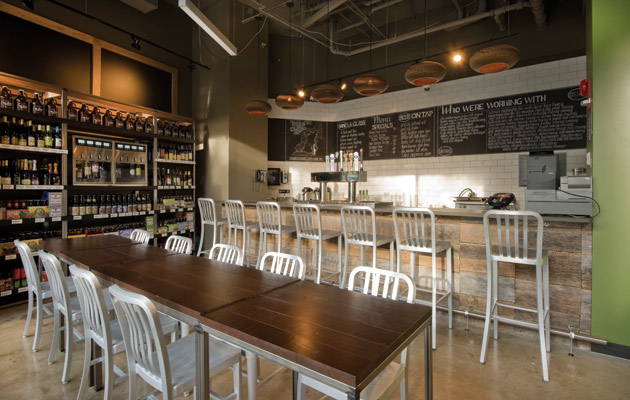 When Eataly opened its first U.S. location in New York City in August 2010, the concept was described by celebrity chef Mario Batali, a partner in the business, as a grocery store with tasting rooms. In fact, the New York location and a second U.S. Eataly location that opened in Chicago last December each feature more than 50,000 square feet of aisles and dining areas that showcase items found in traditional and specialty supermarkets. But the biggest difference is that scattered between shelves of pasta, olive oil and fish reside dining areas that focus on the very foods Eataly sells. Each restaurant features its own theme and menu, with each one stationed next to its appropriate retail section — vegetables, fish, meat, pizza and pasta, cheese, wine, beer, gelato and pastries.

The new term for this type of market eatery? "Grocerant," which captures the essence of the combination of supermarket and gourmet eatery.

"If diners enjoy what they eat, we have every single product in the store so they can purchase it after eating in the restaurant," explains Caolan Sleeper, Eataly's internal construction project manager. "Historically, Eataly doesn't feel like a traditional grocery store. We've come a long way from just a few short years ago when grocery stores were just distribution centers for food."

Each section of Eataly has a designated culinary expert who gives preparation tips, provides recipes and prepares the items for use. On any given weekday, between 5,000 and 8,000 people walk through Eataly in New York. That number jumps to upwards of 10,000 on weekends. Meanwhile, more than 3,000 shoppers visited the restaurants at Eataly's Chicago location on its December opening day.

"Eataly has introduced the idea of a supermarket as a food hall and has introduced the United States to what has been common in Europe for decades, if not centuries," says Nick Giammarco, creative principal, retail strategies, for Detroit's Studio H2G. "We believe that formats like Eataly, Harrods of London and KaDeWe in Berlin are formats that will slowly be mimicked in the U.S."

While supermarkets that feature dining areas aren't a new trend in the U.S., the push to create the ultimate shopping and dining experience is changing the way consumers view a trip to the grocery store. It also changes the way restaurant operators view their competition.

"Supermarkets are targeting the restaurant customer because prepared foods have become a strong avenue for growth for retailers. They have the ability to offer restaurant-quality meals for reasonable prices, and many supermarkets are doing so in creative, innovative ways," notes Wade Hanson, a principal at Technomic, the Chicago-based market research firm. "Consumers now view supermarkets as a very real alternative to restaurant dining in many instances."

One reason for grocers' interest in the restaurant business is that it represents a way for them to stave off sales erosion brought on by other retailers entering the grocery business. As a result, restaurants face potential sales declines as supermarkets cash in on dining occasions that were once outside of their realm.

The average person goes to a supermarket 1.6 times per week but makes food buying decisions, such as where to have lunch, 2.1 times per week, says Phil Lempert, a consultant known as The SupermarketGuru. "Over the last few years, supermarkets have lost market share because of other retailers. So now, supermarkets are trying to build relationships with shoppers, celebrating and surrounding food," Lempert notes. "Twenty-five years ago, Kroger had 'restaurants' in their stores that were basically an extension of the deli. So, it's not something new, but it is something that's evolving."

Indeed, mainstream grocers like Wegmans, Publix and Schnucks now have full-service restaurants in their stores, as is the case with specialty retail outlets like Whole Foods Markets. In mid-December Whole Foods opened a 56,000-square-foot store in Brooklyn, N.Y., that features a rooftop tap room and restaurant, as well as an in-house ramen chef, a pizza station with a wood-fired oven and a fresh juice bar.

Another testament to the continuing evolution of restaurants at retail: Hy-Vee grocery stores are converting their deli seating areas into full-service restaurants in the form of Market Grille and Market Cafe eateries. "We've had dining areas within our stores dating back to the 1960s, so Hy-Vee was an early adopter of in-store dining," says Ruth Comer, Hy-Vee assistant vice president of media relations. "It's not anything revolutionary in our stores. What's changed is that we're adding a service aspect to our dining."

In December 2013, the company announced the addition of 50 Market Grille and Market Cafe restaurants to its stores throughout the Midwest as part of a systemwide shift to a full-service dining model. In total, Hy-Vee will retrofit about 235 of its locations with full-service restaurants, a transition expected to take 3 years to complete. As it now stands, Hy-Vee has three Market Grille restaurants in operation and four to five more casual Market Cafes. The transition is being made to appeal to its customers but also to drive dinner business.

"Our breakfast and lunch business is very busy, but our evening business was not up to the same level," Comer says. "We want to do something to make our store dining areas a destination for our dinner customer."

As part of Hy-Vee's restaurant evolution, the company is making significant design changes to its in-store dining areas. The upgrades include new booths, tables, lighting and decor. Additionally, Hy-Vee's restaurants will feature liquor sales for the first time, with Market Cafes selling wine and beer and Market Grill locations featuring a full bar. The restaurants also will have several flat-screen televisions, as do many QSR and casual-dining players.

"Based on our research and the listening that we did [from customer input], this is what a large number of our customers are looking for in the evening as compared to a self-service or food-court type of atmosphere that's been popular at lunch," Comer says. "We want our restaurants to reflect the culinary expertise we now have. With the introduction of more trained chefs and foodservice experts in our stores, this is the next logical step."

Similar to other supermarkets, Hy-Vee now designs its spaces to be more inviting to shoppers and to evoke a separate feel from consumers' shopping experience. The goal is to capture more of the consumer's food dollar, now being spent at restaurant operations across the street and across the country.

"All of the spaces are being designed with purpose," says interior designer Krista Watterworth, who has designed restaurants for the Food Network television show "Restaurant: Impossible." She explains, "It's really about creating intimacy in the vastness of the commercial space."

Additionally, these supermarket restaurants feature natural materials such as wood and flooring that differ from what consumers experience in the grocery space. More important, the dine-in areas do not reflect the design or experience of a food court.

"The way we live, we're on the fly constantly, so grocers are creating a space where people can stop and sit for 20 minutes and make that part of their shopping routine," Watterworth says. "It's a great way for people to relax, and it's also a great way to advertise products. The way that we market today is so much more organic, and I think that's part of this whole thing. Our lives are becoming more integrated with our needs, both our commercial needs and our product needs."

To combat the consumer mindset that supermarkets and grocery stores can't deliver an intimate and comfortable restaurant experience, retailers continue to look for ways they can lead the trend, rather than go along with it.

Giammarco and his team at H2G worked on the development of Buehler's Market in Ohio and Glen's Garden Market in Washington, D.C. "Glen's is a specialty food store designed to appeal to foodies or health-conscious consumers who resonate with social trends such as buying local," he says. "We felt that it was important to offer a space where customers could meet and gather, and consume foods offered in the store."

The dining area at Glen's Garden Market behaves like a wine bar because it serves local wine and beer in addition to small plates. "It's really an extension of the market itself but, in a sense, the areas leverage off of each other," Giammarco notes. "Having restaurants in supermarkets really validates and conveys a quality of fresh and, in many ways, of healthy foods prepared especially for the customer. It becomes a restaurant camouflaged as a market and vice versa."

Eataly's architects have designed each of the chain's 28 locations to reflect a rich heritage of food. The company was launched in Turin, Italy, by founder Oscar Farinetti in an effort to encourage the slow food movement. Eataly's breakdown of shoppers compared to diners is almost an even 50/50 split, with its customers spanning almost every social stratum.

"There is a lot of education behind Eataly, but it's a slow process because it's a change in attitude and in people's mentality," Sleeper says. "So, when you walk into Eataly, you're bombarded with colors and people and movement and communication. We like to talk about our producers and where they come from, so education is huge for us."

While concepts such as Eataly continue to reshape the grocery experience for urbanites in cities like New York and Chicago, they won't work everywhere. But their popularity conveys the message to grocers that they can successfully expand their horizons. "People have decided, after shopping around, that the supermarket is the best place for getting food," says Lempert. "They're trying again to be the center of the community and everything that community needs."

"Because of the shift in social trends, along with a highly competitive market temperament, supermarkets have slowly recognized that their direct competition is not the other supermarket, but the restaurant down the street," Giammarco says. "As consumers, we are benefitting from this continually evolving food offering."