Blurring the Lines between the Inside and Outside in Restaurant Design

The inside and the outside merge at Glass and Vine in Miami, Fla.which was the specific intent of designer Vincent Celano. The owner of Celano Design Studio in New York City, Celano says this allows the restaurant’s owners to maximize the square footage of the restaurant but also offer a lifestyle concept where energy flows seamlessly from the outside to the inside and back again.

Celano sees more and more requests for restaurants that bring the outside in and vice versa. “It’s blurring the lines, and it’s about the idea that a restaurant space is very like theater with movement and change and a story that evolves, whether it’s seasonal or afternoon to nightlife,” he explains. “This brings the energy of the city or the street — or the park — into a concept. Then you also have the restaurant interacting with pedestrians, which is an added bonus.” 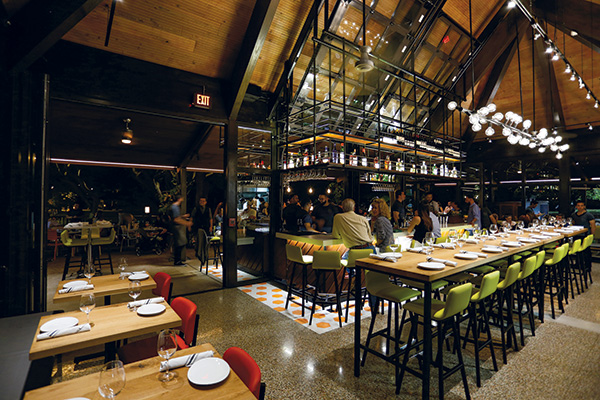 Glass and Vine’s bar straddles the indoors and the outdoors. Between the two spaces is a glass wall that opens like a garage door.Glass and Vine opened in March in Peacock Park, Fla. It’s in the ideal spot to be open to the elements — not only does it bask under Florida’s cloudless skies but it also merges with nature just steps away. In fact, says Celano, “this was an outdoor space that looks to have an indoor component.”

The restaurant is in a mid-1960s landmark building, which was once solely a recreation facility. Part of the building still serves as a recreation area for children.

A third of the restaurant is inside, within the walls, while the remainder is outside. A large portion of the exterior space sits under a hard ceiling, which extends seamlessly from the building to cover much of the outdoor dining areas. Ten percent of the space is uncovered but under patio umbrellas; this area is the closest to the park. Of the 244 seats, 40 are in the uncovered section, while the remainder are under a roof; 25 seats are at the bar.

The restaurant encompasses 4,375 square feet, and the bar sits in the middle, straddling the indoors and outdoors. Between the two spaces is a glass wall that opens like a garage door. This works well for Glass and Vine, Celano says, because the high-pitched ceiling allows the wall to roll inside so it’s part of the architecture, even when open. “We were trying to match the old architecture with the new, and the garage doors looked like they were always there,” he says. The glass door cuts the bar in half when it’s closed.

One of the obvious challenges of having a restaurant where the inside and outside merge is the weather, “though technology today means there’s a lot of interesting ways to make it work,” Celano says.

The challenge at Glass and Vine was the heat during the summer months. To counteract this, Celano turned to old technology. “How do you design to create shade and maximize airflow?” he asks. “Over time, society has gotten overly used to modern systems, forgetting that for hundreds of years, we didn’t have them. It’s about understanding north versus south facing and where the shade is and the airflow. It’s about understanding the placement of the restaurant.”

At Glass and Vine, the hard ceiling that extends over most of the outdoor area serves as the primary protection from the elements. The restaurant also uses fans, but a good breeze comes through much of the time, from both the park and the nearby Biscayne Bay. The inside of the restaurant has a brand-new HVAC system, and an air curtain flows in place of the glass door when it’s open, trapping the cool air inside. Using the same materials inside and out also helps blur the lines between the two areas. “It’s like one space with an invisible wall,” Celano says.

Technology also makes it easier to design this type of venue with weather-resistant tables, finishes and fabric. The same tables, chairs and fabrics are used throughout, utilizing all-outdoor material for consistency and so everything is versatile enough to be moved as needed.

“Manufacturers are working toward making these materials that are really great for outdoors but are also at the level of what you see on the interior,” Celano says. “For the longest time, you had to compromise with what you’d be able to do on the outdoors, and clients are usually willing to pay a little more for these indoor-outdoor products.”

At night, the restaurant becomes especially attractive from the exterior, Celano says. “The green element encompasses the building, and at night, it becomes this glowing lantern and the walls disappear. What used to be a dark park at night is now full of energy.” 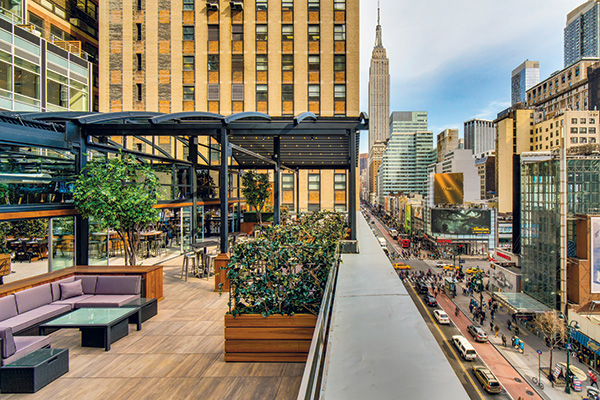 Rock and Reilly’s sits on the fifth floor of the Renaissance Hotel in New York City and overlooks the bustling cityscape. In a more urban setting, Celano designed another concept that’s merging the inside and the outdoors. Rock & Reilly’s opened in March in the Renaissance Hotel in New York City. The restaurant resides on the hotel’s fifth floor, overlooking Madison Square Garden, and features what’s probably, says Celano, the largest retractable roof in the city.

At Rock & Reilly’s, there’s no removable wall, as there is at Glass and Vine, but a roof, which is retracted for four to six months of the year. Heaters on the patio help extend the season, too. In the winter, Celano says, “it becomes a large indoor restaurant. The function of the space is always the same; it’s just open-air versus closed. It looks good with both, and those two functions need to both work.” The walls, he explains, are made from glass and ipe wood, and the hard ceiling makes the space feel very different depending on whether it’s open or closed.

Since there’s no park in this urban setting, “we really had to bring that green element into the area,” Celano says. To do this, he added trees and vines and green walls “to really make it feel like the outdoors, over time, and it had to be coordinated in advance so it was growing and the right size vegetation when it opened.”

Having no roof during New York City’s hot and humid summers works this high up, Celano says. The restaurant gets good airflow, plus it’s surrounded by a lot of tall buildings that keep it shaded most of the time. He’s also installed lots of fans that push the air down, and the HVAC system is capable of forcing cold air onto the patio, too.

The restaurant, Celano says, has a very different vibe in the winter and the summer. “It’s actually an outdoor space that can feel like an indoor space rather than vice versa,” he explains. “But in the winter, it can be a cozy green space with warm lighting.”

With just a small change in a building’s architecture, restaurants can flip seamlessly for any weather; Celano’s mastering the art of seasonal travel.

Rock and Reilly’s sits on the fifth floor of the Renaissance Hotel in New York City and overlooks the bustling cityscape.