While all types of pizzas have been among America’s favorite foods, Neapolitan-style pies are the current hottest trend. As spelled out by the Italian organization Associazione Verace Pizza Napoletana, restaurant operators must make this “true” style of pizza to exacting standards. The association specifies the quality and type of ingredients, sauce and dough production techniques, and rising times. Most important, Pizza Napoletana can only be made in a wood-fired oven that has reached a temperature of 485 degrees C (905 degrees F). “This is essential,” admonishes the Italian association. 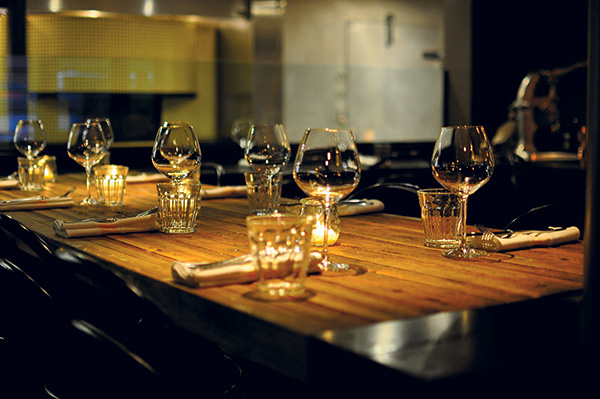 At Sotto, customers can choose to sit at a counter that gives them a direct view of the pizza oven and staff working it.

Instead of importing an artisanal pizza oven from Italy, this restaurateur imported bricks, sand and Italian artisans to build one in his restaurant. “We wanted a traditional Neapolitan pizza oven, so our choices were limited,” recalls Steve Samson, chef/owner of Sotto, a Century City-area restaurant that focuses on regional Southern Italian cuisine — the flavors of Sicily, Campania, Sardinia and Puglia.

During a research trip to Italy, Samson visited the factory of a Naples-based oven manufacturer. “We were immediately sold on his artisanal ovens,” he says. 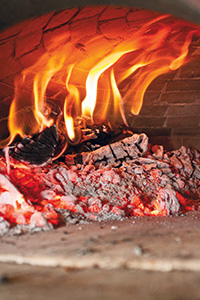 The pizza oven’s flames provide drama and warmth at restaurants like Sotto.The restaurant, which opened in 2011, is housed in a basement, steps down from the street level, which posed a problem when it came to the oven installation. “We weren’t able to fit a prebuilt oven into our underground space, so the manufacturer and an assistant had to build the oven on-site,” explains the chef.

The first step was to coordinate the shipping from Italy of all materials needed to construct the oven, including bricks, bags of concrete and even sand from Mount Vesuvius. Along with necessary specialized tools, the shipment weighed 15,000 pounds. Due to the heavy load, the delivery truck almost flipped over while trying to back up the steep driveway behind the restaurant.

The manufacturer and his apprentice stayed at a hotel down the street and worked day and night for 10 days. There were a few challenges: When one of the oven floor panels arrived broken, new panels were sent overnight from Naples. Due to a low hood, the external shape of the oven had to be changed. For several days, the manufacturer was hunched under the hood, trying to finish the top of the oven. “He said he would never build an oven in a space like ours again,” says Samson.

Sotto features simple, rustic and warm design and decor. This includes travertine floors, tables made with wood reclaimed from a whiskey distillery and Edison bulbs that provide illumination along with a thrift-shop chandelier. The oven is the iconic focus of the decor — the first thing that guests notice upon entering the restaurant. Besides pizza, bread is baked in the oven every morning, and meats and vegetables are roasted pre-service.

The oven has a 4.6-foot floor diameter. When well stoked, the floor temperature is around 850 degrees F, while the ceiling and ambient temperatures are well in excess of 1,000 degrees F. While the oven itself takes up only an eighth of the kitchen, the pizza station takes up a quarter.

The payback for all that effort? “Great product,” says Samson. Sotto was named the best pizza in Los Angeles by LA Weekly and LA Magazine, and the Food Network called Samson’s guanciale-topped pie “the best gourmet pizza in America.”

Chef Samson is busy opening his next place, Rossoblu, a restaurant dedicated to his Bolognese upbringing and the region of Emilia-Romagna. 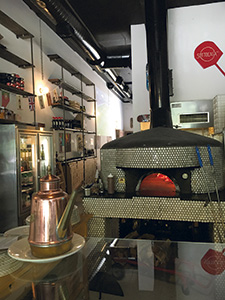 A forklift hoisted the pizza oven into place at the Williamsburg, Brooklyn, Sottocasa location.

“It was absolutely worth it,” says Arrigoni about the trials of installing the imported wood-fired pizza ovens. “They are beautiful pieces of masonry, customers admire the ovens and it is the best way to cook pizza.” In the 1,000-degree heat generated by the ovens, pizzas cook in just 90 seconds.

When Arrigoni opened his first restaurant five years ago in Brooklyn, N.Y., he bought a handcrafted oven directly from the manufacturer in Naples. It was shipped assembled and complete in one piece, weighing about two and a half tons and measuring six feet by six feet at the base.

The Atlantic Avenue site is a typical late-1800s townhouse constructed with wooden beams and joists. Due to the weight of the oven, it would have been impossible to install on the regular floor, recalls Arrigoni. He considered reinforcing a section of the floor for the oven, but there was no way to roll it in. The combined weight of the oven and three tons or so for the forklift meant the entire floor had to support that mass. Also, sotto casa translates from Italian as “below the house or cellar.” The restaurant is several steps below street level, so rolling in the oven was impossible.

The solution: A crane lifted the oven up and over the building and lowered it into the restaurant’s backyard onto a reinforced concrete base. An addition was built over and around the oven to incorporate the nook into the dining room space. “It will never be moved again,” says Arrigoni.

At his second restaurant, in Williamsburg, Brooklyn, installation was a much easier job. The building was new construction with a concrete floor, and the entrance was level with the street. A forklift hoisted the pizza oven into place in the center of the restaurant. This time, Arrigoni worked with a local company that imported the oven, which made that aspect easier.

His third pizzeria, which opened in April in Harlem, N.Y., presented insurmountable challenges. The restaurant is also sotto casa, a few steps down from the street, and has no backyard. “There was no way around it; we had to get a different type of oven,” says Arrigoni. An Italian oven made from a composite material rather than bricks was shipped in manageable pieces. All that needed to be done was to put the oven together on-site and insulate it.

All Sottocasa Pizzerias exude a homey atmosphere with contemporary decor featuring lots of wood accents. “We are not trying to mimic an Italian trattoria,” says the owner. The ovens become the focal point of the restaurants, especially in Williamsburg, where the position creates more visual drama. It’s a big open space with a high ceiling, and the oven is situated in the middle of the restaurant.

The pizzaiolos shape and top the pies at a prep station near the oven. The pizza makers require some space to move around with their long-handled peels. “It’s part of the show,” says Arrigoni.

The oven doesn’t require a hood; it vents through a chimney. Local regulations require a smoke-reduction apparatus. Wood for the day is stacked by the oven; the supply is kept in a metal box outside. The oven is so well insulated that you can touch any part of the exterior; it’s not a safety issue.

“Working with wood-fired ovens can be a challenge,” observes Arrigoni. There is a learning curve. “It’s not a pan you put on the stove and turn on the gas. But the pizza it makes is worth the effort.” 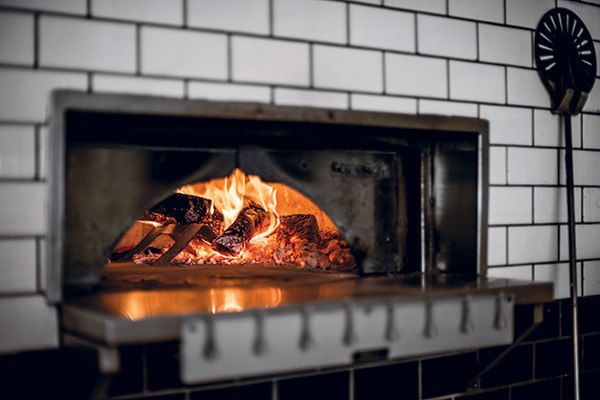 With 13 units in the U.S., 800 Degrees Neopolitan Pizzerias have a mix of oven styles — some are focal points, others are bricked into the wall.Because the high-temperature ovens cook pizzas in 60 to 90 seconds, Carron was inspired to set up a fast-casual restaurant like an assembly line so that customers could order a customizable pizza, delivered by the time they are ready to pay. The first restaurant opened in 2012; now the chain has 13 units in the U.S., Dubai and Japan, each outfitted with two traditional Neapolitan ovens. 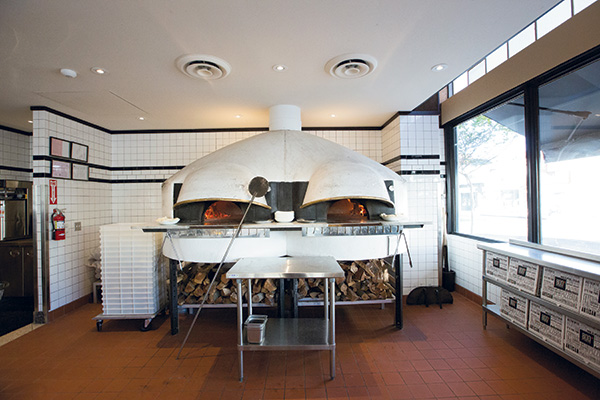 Carron did a lot of research to home in on the perfect pizza oven for the chain. Each oven has its own pros and cons. He has worked with a number of different manufacturers, sourcing several products — but all true wood-burning Neapolitan ovens.

The focal point of the concept is prepping and baking the pies. “Pizza is being made before the customers’ eyes — it’s entertainment,” says Carron. Guests first choose a crust (Neapolitan, crispy or gluten-free), then a base style (margherita, bianca, marinara or verde). They can then further customize with add-ons of proteins, cheeses and veggies. The pizza is baked and ready by the time customers reach the end of the ordering line.

In some of the restaurants, the domed wood-burning oven becomes the dramatic focus of the space. In other units, the ovens are bricked into the walls with just the openings visible. “They are still dramatic; you see these two fiery mouths,” says Carron. 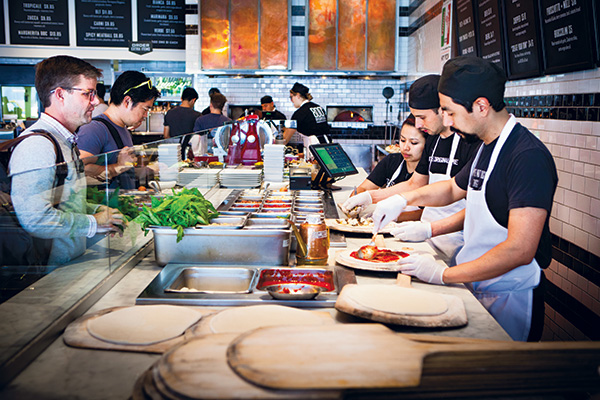 At 800 Degrees Pizzerias, pizza is made before the customer’s eyes.Carron and his team have learned some lessons while installing these ovens. Placement and installation of the base is done during the shell stage of construction, often before the restaurant itself is designed. Older buildings often need reinforcement of flooring and additional engineering to support the weight. “For one installation, we had to remove — and carefully replace — the facade of a building on the National Register of Historic Places,” recalls Carron.

The positioning and venting of the oven chimney has also been a challenge. “It’s frustrating when smoke from the exhaust is sucked into someone else’s air intake, filling a neighboring 30-story building with smoke,” says Carron. The restaurant opening had to be delayed while the vents were repositioned.

800 Degrees just opened its first unit in Japan, where six others will open over the next five years. Five more locations are slated for Dubai, and Carron has plans for more restaurants in California.