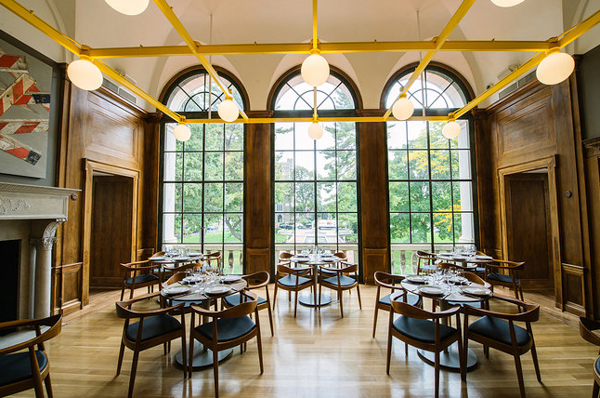 The property recently underwent a $5 million renovation to restore it to its original grandeur and create what operator Chris Cannon hopes will become one of the state's most iconic destination restaurant spaces.

The project entailed a complete retrofit of the 18,000-square-foot mansion enabling Cannon to realize his vision for a four-part concept that includes The Oyster & Wine Bar; the Vail Bar cocktail lounge; The Rathskeller private event space; and The Dining Room. Combined, the spaces, which were designed by Cannon and Eric Mailaender, principal at New York-based Resistance Design, seat roughly 300. 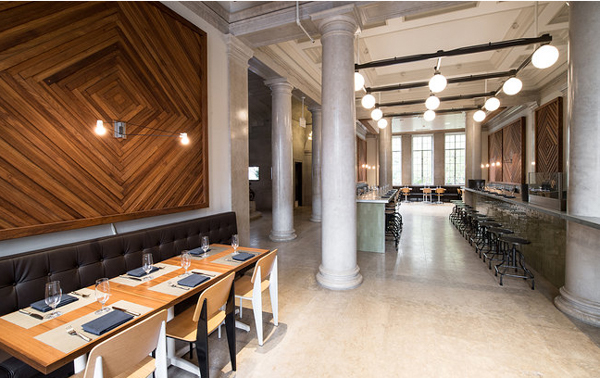 A long view of the Oyster & Wine Bar on the property's main floor.

Contractor Hollister Construction Services navigated challenges encountered in renovating the old structure, as well as the restrictions placed on the project due to the property's listing on the National Register of Historic Places.
From an infrastructure standpoint, those challenges were considerable. The mansion's lobby, for instance, has an Italian marble staircase and floor-to-ceiling columns that create a magnificent visual effect but also splits the structure in half, making it nearly impossible to run all the required mechanical, electrical and plumbing systems. With no dedicated chases and no option for running mechanicals on the building's exterior because of its landmark status, the team got creative, using a variety of hidden ducts — including an abandoned dumb waiter, interior shafts and an elevator — to deliver the infrastructure necessary for a major restaurant operation. 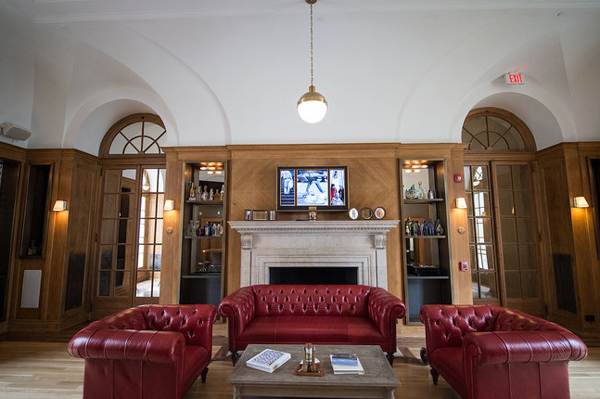 The Vail Bar on the main level is a 1920s-inspired cocktail lounge that occupies the mansion's former library.

The second-floor kitchen posted additional challenges, as it required a former parlor to accommodate a large full-service kitchen without compromising the floor and the ornate plasterwork on the ceiling below. Ultimately, the floors in the kitchen were raised so that wiring, plumbing and vents could be installed without affecting the building's interior.

Jockey Hollow Bar & Kitchen occupies three full floors and the basement in the mansion and offers a menu of contemporary American and Italian-inspired dishes. The space blends the historic with contemporary design themes, and integrates relics found during construction into the décor. In the basement, for instance, the team discovered a 100-year-old wine cellar built into the original concrete walls, which it incorporated into the new wine cellar. And basement jail cells, used during the building's former iteration as a police headquarters, now function as a sausage-making room and keg room in the Rathskeller portion of the operation.

Cannon notes that the different aspects of the original structure played an important role in the creation of the multifaceted restaurant concept, with the fine-dining component overlooking an elegant reflecting pool from the second floor, while a hipper and more industrial feel pervades the private event space and bar in basement, which features a terra cotta ceiling. The property houses an extensive contemporary art collection, a mix of two- and three-dimensional and video pieces commissioned specifically for the space from international artists.

The end result, says Christopher Johnson, founder and CEO of Hollister, is an "amazing destination for the Morristown community to enjoy a variety of dining experiences while surrounded by an architectural marvel with a fun, contemporary attitude."