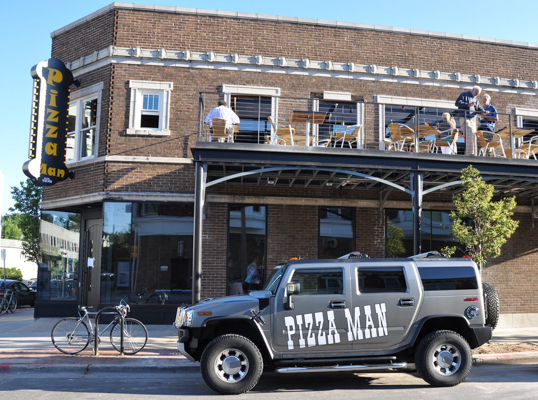 Pizza Man, a Milwaukee institution since the 1970s, lost its original cozy, dark, 55-seat location to a fire in 2010.

Encouraged to rebuild by loyal fans, the business moved into a dramatically remodeled and significantly larger, 225-seat space last summer. The project marks the renaissance of a beloved local restaurant and highlights the creative, adaptive reuse of a historic space in the city's eclectic East Side neighborhood.

The two-story corner building, just a half-mile from the original Pizza Man, dates to the 1880s. Over the years, it had been split into multiple venues. The ground floor was most recently home to a dry cleaner and a shuttered frozen custard shop. A small tavern — still in operation — sits at the building's rear and the second floor housed what Matt Rinka, principal of Milwaukee-based Rinka Chung Architecture, describes as a warren of outdated apartments.

Recreating Pizza Man there held a number of challenges, the first of which was convincing the restaurant's owner, Mike Amidzich, and the investors who would finance the project of the viability of the design and renovation strategy. Rinka, who had been approached by the building's landlord about helping to bring Pizza Man into the space, says, "When we toured the building with Mike he wasn't convinced. He loved the idea of it, but it was tough to envision how it could be converted into a Pizza Man. After a round of sketches and drawings, however, everyone started to get the idea that it could be an amazing space."

A second challenge was getting approval from the city's Historic Preservation Commission. Doing so required providing a high level of detail as to how the renovation would take place and what the design would entail. "Once we showed them exactly what they'd be getting, even some of the most ardent preservationists were on board because it didn't take away the building's historic elements," Rinka says. 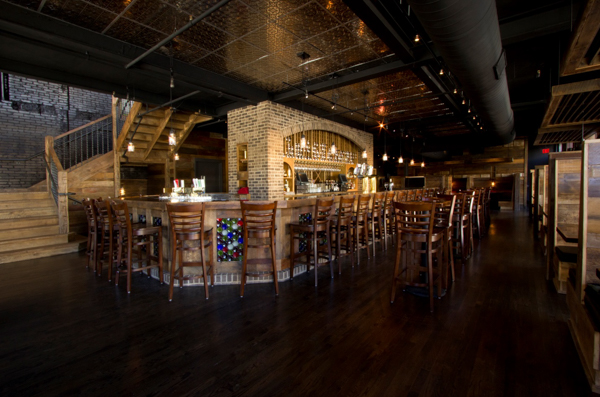 Pizza Man's street corner entrance opens into a large, main-level bar and dining area with a mix of booths, freestanding tables and a small private dining room that doubles as a wine cellar. Backlit glass panels handcrafted from wine bottle bottoms add a warm glow to the lower portion of the bar. They carry a signature design element from the custom chandelier, made from iron and wine bottles that hangs above the stairway (below) to the second floor and repurposed wine bottle pendant lights on the upper level. 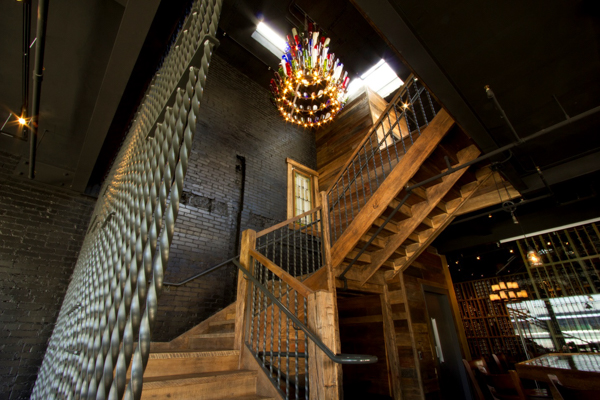 To recreate the original restaurant's warm and cozy atmosphere, the design team, led by Rinka and senior interior designer Michelle Olsen, relied on extensive use of reclaimed barn wood, wrought iron detailing, dark-stained oak floors, and ceiling elements over the bar and booths that bring the scale of the room down. Original interior brick walls were uncovered and either left in their rustic state or covered with high-gloss black paint. 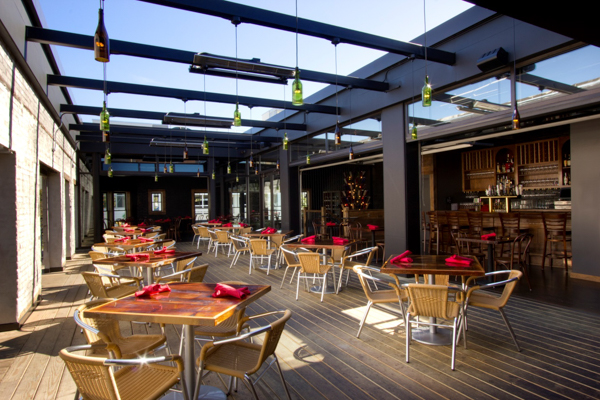 Among the new Pizza Man's biggest design coup's is on the upper level. The space that once held dingy apartments was converted into a bright, airy courtyard dining area that can be completely enclosed, partially enclosed or fully opened up depending on the weather. Flanked by a bar on one side (salvaged from the original restaurant) and the exterior brick wall on the other, it features a retractable roof and extends through large, glass garage doors built into the exterior wall to a balcony seating area beyond. The approximately 800-square-foot retractable roof, the first in a restaurant in Milwaukee, was added eight months after Pizza Man opened.

"Removing the concrete roof in this area was a massive undertaking," Rinka says. "And while the old building was extremely well built, the second floor was never intended to handle the weight of a restaurant-style business. It was residential. We had to over-frame the entire second floor with a new floor structure."

In its second incarnation, Pizza Man has already received many awards, including the 2014 Business Journal Real Estate Award for Best Retail Renovation/Development; the 2014 City of Milwaukee Cream of the Cream City Award for Historic Preservation; and the 2014 ASID Wisconsin Chapter Bronze Award.

"One of the things we're most proud of about this design," Rinka notes, "is the comments we get that it feels like the old Pizza Man but in a modern, more sophisticated setting. That's exactly what we were aiming for."