These two drinks, and the cultures they came from, were the inspiration behind Denver’s new Dos Luces Brewery, which offers gluten-free beers inspired by the flavors and ingredients of chicha and pulque.

According to Laura Pirie, Principal of Pirie Associates Architects, the design of the brewery is derived from the same cultures that created the famed drinks. Dos Luces Brewery’s design is based on the shared concept of three worlds: one embodying our aspirations, one our creative energy and one where the two come together, says Pirie. 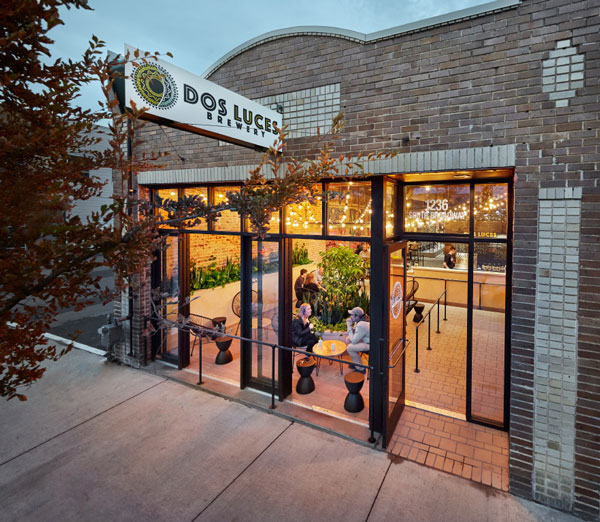 The facade and front section of the brewery represents the upper world, the world of aspirations. According to Pirie, the highest aspiration of owner Judd Belstock is community, so this was designed as a communal space: Tall glass windows and doors practically make the restaurant blend into the sidewalk, creating a plaza-like feel reminiscent of spaces found throughout Central and South America.

The interior of the upper world section carries on to the outdoor plaza with a community focus. Floating chairs and lounge-height tables encourage guests to form groups, while string lights overhead radiate from a central point. “The radiating lights act like the sun, metaphorically, which is connected to the sky, which is connected to our highest aspirations,” Pirie says.

This space is also filled with plants, including a cinnamon tree, one of the key spices in brewing chicha and pulque. The tree is just one of many different types of plants that decorate Dos Luces’ interior.

“When creating a space that recharges and makes people feel good, it’s not good just to have plants. It’s good to have a variety of plants. While people can’t articulate why it’s good to have that diversity, it’s been found in studies that it’s essential to creating that health response,” says Pirie. 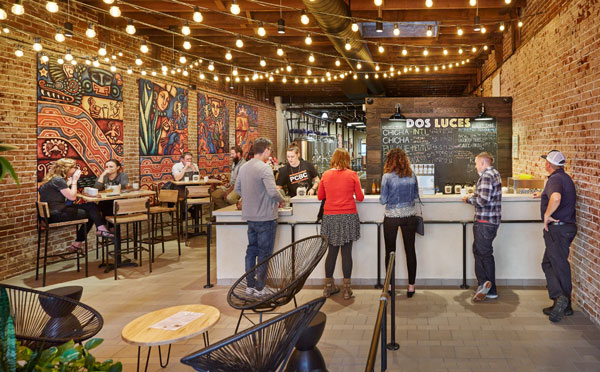 The ordering counter toward the back of Dos Luces’ front section serves as a barrier between the upper and middle world’s of the brewery’s design, Pirie says. Notably, this space does not have any bar seating. 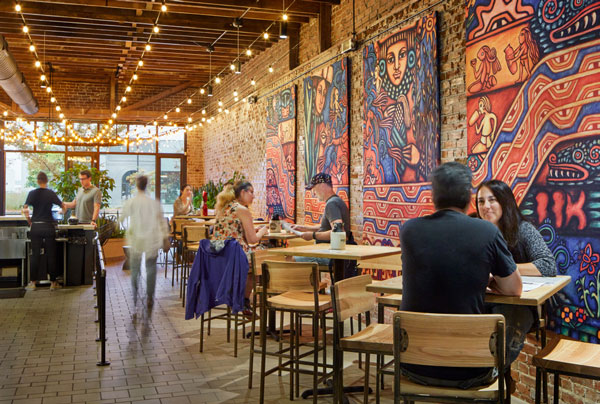 That’s intentional, says Pirie. “[Belstock] didn't want to have a bar where people sat shoulder to shoulder. He wanted to have a place where people could sit together and come together in community. A typical bar were people stand or sit side-by-side and don't talk to each other was absolutely not the direction he wanted to go.” 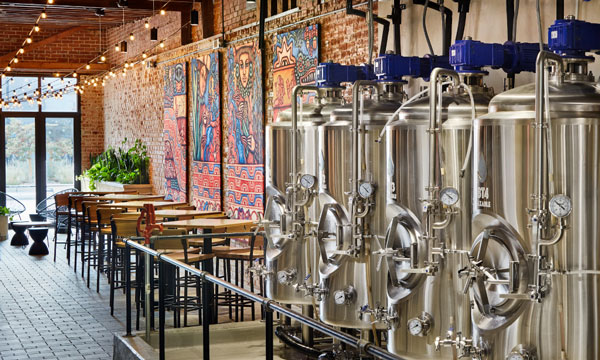 Past the ordering counter is the “middle world” where aspirations and creative energy meet in the form of work.

Recognizing this work is a set of murals created for this project that depict the making of pulque and chicha. Carrying this idea to its fulfillment, the brewery’s middle world is where guests can find the work of brewing and making these drinks. 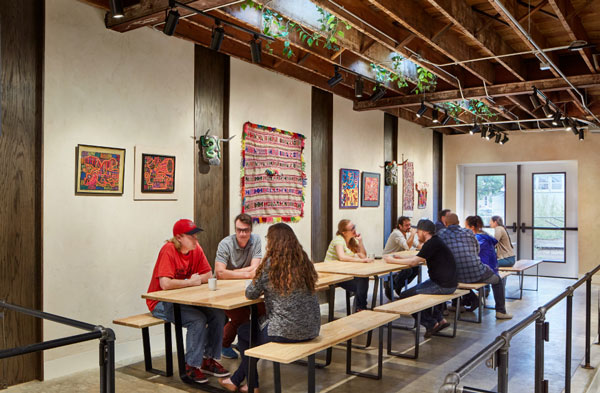 The back section of Dos Luces represents the lower world, the source of creative energy.

To help brighten the space, Pirie designed skylights. Plants have been added to the ceiling beams and hang down, making the space a cavern-like.

Representing the home of creative energy, this space includes a revolving collection of artwork and tapestries from South and Central America, as well as pre-Columbian pottery.

The focal point of this back section, though, is the long “brewer’s table” where groups of guests can learn about the craft of making pulque and chicha, much like a chef’s table lets diners learn about the work that goes on in a kitchen while sampling its products. “[Belstock] wants people to understand the brewing process and why it’s a little bit different brewing corn-based beer instead of wheat or barley or hops,” Pirie says.

In keeping with the theme of creativity, Pirie added, the table can also be used for other creative activities by the community, and already hosts regular community painting events.