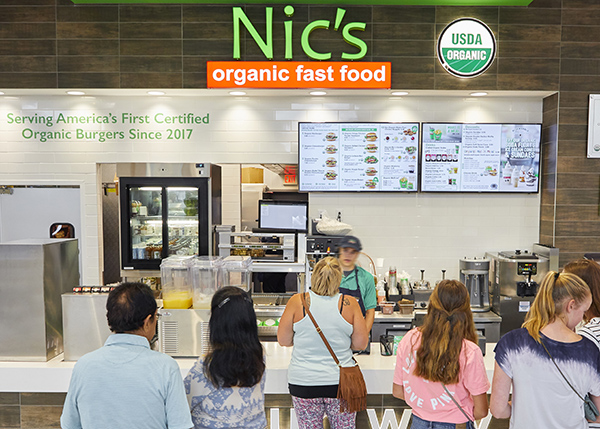 Owner Benjamin Brittsan, his wife, the eponymous Nicolette, and their silent partner, Neal Zeavy, opened their first unit in March 2017, followed by their second this past spring, and a third will open this fall.

The restaurants are doing well. Sales in the first location doubled in the first year and the second location is on pace to do the same.

Each location is very different, and that’s deliberate. The first, in Rolling Meadows, Ill., in suburban Chicago, was built in a former restaurant space. Here the drive-thru takes center stage, accounting for 60 percent of the business. The second restaurant opened in Woodfield Mall in Schaumberg, Ill., and is located in a food court.

The third Nic’s will be in the base of a commercial building in downtown Chicago, in the Loop.

What is your background?

BB: I’ve been in the restaurant industry for about 20 years and a professional chef for much of that time, which has helped me with operational duties and sourcing. My wife has a background in the foodservice industry and she designs our restaurants, though she has no background in that, and she’s a chef, too.

What are your immediate plans for the expansion of Nic’s Organic?

BB: We would like to have five restaurants in the Chicago area by the middle of 2019. The fourth will be in a suburb, Evanston, and will be a new build with a strong drive-thru. We’re still searching for the fifth location.

We want to touch different [types of] locations here and then start branching out to the coasts, where we feel organic is important.

Then where will you go and why?

BB: We’ll move to the coasts, then work our way back in. We feel the West Coast would be most appropriate and everyone knows California, Oregon and Washington are very green, very organic.

We’ll probably start with San Diego, because we have received so many leads from people who say Nic’s would do incredibly well there, then move north.

On the East Coast, Manhattan and Brooklyn are where we’re looking, and we’d like to hit Boston.

What is your goal in terms of number of locations?

BB: We’d like to have 50 locations within the next three years. I think once the downtown Chicago location opens, that’ll be where we learn to go into the big cities.

Will franchising be the next step?

BB: No. We’re going to stay company-owned as long as we can though we get asked every day if we’ll franchise. But we’re not ready because we really want to maintain our certified organic standards. If a franchisee slips in any way it could compromise the whole brand.

Does being certified organic slow down the pace of growth?

BB: Yes. I’ve been in the restaurant industry for more than 20 years and this has been the most difficult thing I’ve ever done because of the standards behind being certified organic.

There has to be accountability from the farmer that grew it all the way to the customer, and every piece of paper and every ingredient is examined. It’s challenging, but we want to do it. If more restaurants operated at this level, we’d be potentially solving some health concerns.

How do you research which markets will work for Nic’s?

BB: All markets have to be relatively green and we have a team of brokers who operate on a national level. We also do a lot of r+d, eating in the neighborhoods of different cities and walking around them. And we get a lot of feedback from people in different cities, so we compile data from that, too.

We’d like a Nic’s everywhere, but we need to focus first on places where people know what organic is and where people want to learn about it.

Does your design reflect that you are an organic, clean food restaurant?

BB: In Rolling Meadows we took over a restaurant and rehabbed it but, in the future, we will be incorporating LEED [certification standards] and we’d like to work around renewable, sustainable energy sources, with recyclable lumber and do all we can to help the environment.

Inside our downtown location we’ll have some higher end finishes to be more modern, but with rustic elements of wood, stainless and a little black steel. And we’ll always incorporate the iconic Nic’s green color.