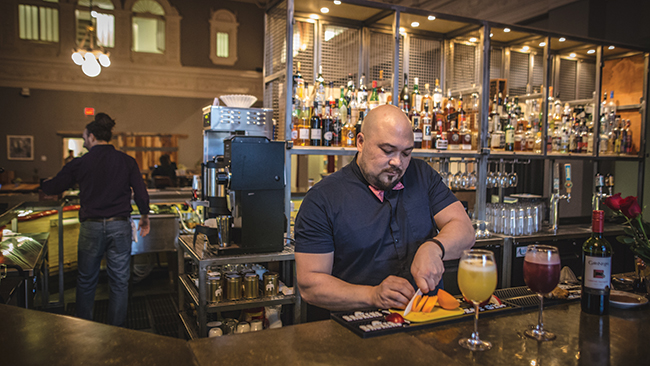 Trust takes a different approach — and is still experimenting with the best way to balance the coffee and cocktails. Located in the Beaux Arts-style restored Mississippi Valley Trust Company building that dates to 1896, Trust keeps the focus on its U-shaped bar, which serves coffee and pastries from 8 a.m. to 4 p.m. and cocktails from 4 p.m. to close.

Both options can be seen from the window, “but the challenge is putting them both up front without them conflicting,” says Chief Operating Officer and Founder Daniel Brian.

Tweaking the concept, which has been open less than a year, has meant lowering the backbar, which serves as both storage and a barista station. Brian also recently moved the espresso machine’s placement from the bar to the backbar to make it more convenient for morning baristas to clean and have a view of guests.

Moving the machine also means that, at night, the bar top is an uninterrupted space and guests can sit along the full length. This is better for revenue, Brian says, and so far, the bar has been bringing in around 75 percent of revenue, both because it has more patrons and because the drinks are more expensive. In fact, since he’s moved the espresso machine, “the bar can now do more than $1,000 per hour easily; before, it was a struggle to do that.”

Operating two locations in one, Brian says, “is always a compromise.” The downside of moving the espresso machine is that it adds a few steps for the baristas. 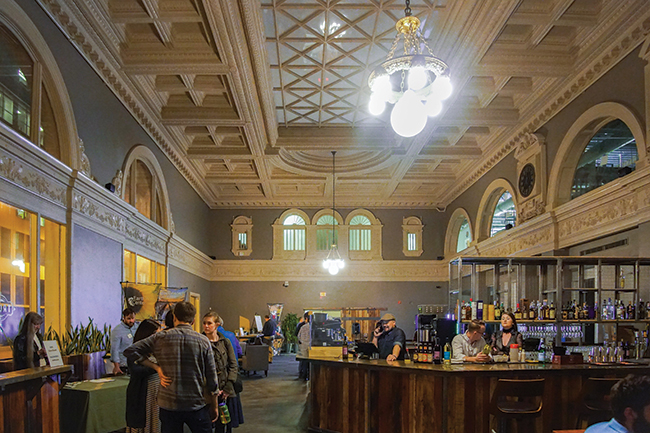 To change the atmosphere from day to night, Brian made sure he could change the lighting. Curtains close in the evening, lights dim and the music volume rises.

The only thing that’s a real challenge to change, Brian says, are the eight two-top tables at the front of the bar. “At a coffee shop, people like to sit at a low table, but at a bar, they like a high table because they’re at the level of the bar, especially if they have people standing around them.”

Brian is considering switching from low to high tables but doesn’t want to do this too soon. “It takes 18 months to get a coffee shop established, but it’s much quicker with a bar. So, I don’t want to move things over too much to the bar because we’re still finding our feet with coffee,” he explains.

The rest of the decor works for both concepts, Brian says. “People want soft seating in bars and coffee shops. They will spill more in a bar, so you want to think of stainability of fabrics, but spills happen in coffee shops, too.”

Trust is a spinoff of Brian’s original Trust in San Francisco. The biggest difference between the two, he says, is that he moved the bar up front; in San Francisco, it’s much deeper into the space. “There, we have a great coffee shop, which is doing incredibly well, and a very quiet bar that our members use (both are co-working spaces). If it was just a bar, it would be in a lot of trouble, but luckily, we have a very active events program there.”