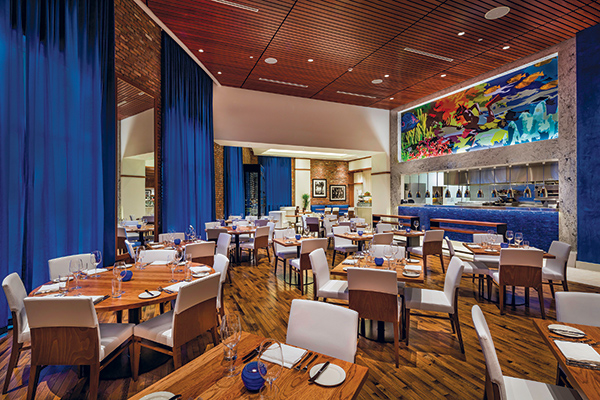 The restaurant’s display kitchen is framed with a spearfishing mural at top and blue tiles below. The energy created by these features helps prevent JWB from becoming too formal.The musician has earned icon status for his island escapism hits like “Margaritaville,” “Cheeseburger in Paradise” and “Changes in Latitude, Changes in Attitude.” He has an adoring fan base, dubbed the Parrotheads, and counts piloting his seaplane from island to island as one of his hobbies. He’s also got credits as a novelist, children’s book author, actor and philanthropist.

Then there are his business ventures. Buffett has leveraged his musical fame into a mini empire known as Margaritaville Holdings. The lifestyle-brand company has a startlingly wide portfolio that includes beer, blenders, drink mixers, packaged foods, jewelry, clothing, casinos,
resorts, hotels and restaurants. All told, Margaritaville Holdings has annual system-wide sales of $1.5 billion.

The Margaritaville Hollywood Beach Resort in Hollywood, Fla., represents one of the company’s newest ventures. The resort boasts 349 guest rooms, a conference center, pools, a private beachfront, and 8 food and drink spots.

This isn’t, of course, Margaritaville’s first resort. The company operates four other hotels and resorts in the United States alone. But with this latest location, Margaritaville Holdings has broken new ground. One of the resort’s eight restaurants, JWB Prime Steak and Seafood, marks the company’s first move into high-end dining.

From a business perspective, building a high-end restaurant in a resort makes perfect sense. At some point during their trip, many vacationers and conference-goers will want a more upscale dining experience. If they can’t find it at the resort, they’ll spend their money somewhere else to get it.

“This is a true destination resort,” says John Cohlan, Margaritaville Holdings CEO. “The idea is, we want people to come here and fill up their vacation with a variety of food and beverage experiences. An important piece of that mosaic, obviously, for that customer is a high-end steak and seafood restaurant experience.”

As much business sense as this may make, fine dining and Jimmy Buffet aren’t a natural pairing. After all, this is a man who’s famous for singing about beer and cheeseburgers.

Bringing these two worlds together — the high-end dining experience and the relaxed, no-worries vibe of the Jimmy Buffett brand — was the overriding goal of the restaurant’s design. That task fell to the McBride Company. The Manchester, Vt.–based design firm’s partnership with Margaritaville Holdings stretches back nearly 20 years. The McBride Company has designed every physical space Margaritaville has ever built.

That experience helped the company set the balance between sophisticated and Margaritaville’s particular brand of good times, says Pat McBride, founder and CEO of the McBride Company.

According to McBride, there’s a good level of fun and kitsch found in the Margaritaville Holding’s stand-alone restaurant concepts: Margaritaville, Cheeseburger in Paradise and LandShark Bar & Grill. These concepts play to the strengths of the Jimmy Buffett brand, with key design elements that include palm trees, parrots and sunset murals, along other island-inspired touches. Such an on-the-nose approach doesn’t work as well for hotels or, by extension, for high-end restaurants. 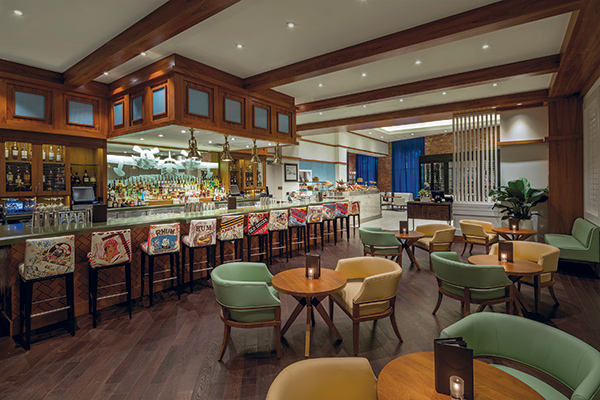 The JWB bar combines rich materials with playful touches, like barstools designed with rum labels from island distilleries. “The restaurants are kitsch and fun and dynamic, but we learned that the hotel experience has to be different,” McBride explains. “It needs to be casual and fun, but it needs to have a sophistication. Your rooms need to be comfortable and secure. So we realized when we were going into JWB that it was going to be steak and seafood and have a higher check average. We could have a tip of the hat to Margaritaville, but it really needed to be a new animal.”

So when developing the JWB concept, McBride and his team took inspiration not from Jimmy Buffett lyrics but from their locale.

Decades ago, says McBride, the Gulf coast was lined with seafood canneries. After bringing in their catch each morning, fishermen would get breakfast at a diner that was near, or even part of, the cannery operation. “And we thought, what if these evolved into not just a place for breakfast, but for a great dinner? It’s a great dining spot and true destination with sensational food. What would it look like?”

The answer, in McBride’s mind, is a space that uses natural and aged materials, a monochromatic palette with splashes of color, and art that celebrates the menu and the region.

Take the bar area, where diners enter the restaurant. The bar itself has a brown granite brick front, giving it an earthy feel, along with the green stone bar top. For patrons who don’t want to sit at the bar, the space offers low-profile two-tops along with captain’s chairs made of either cream- or teal-colored leather.

For the bar’s flooring, McBride and his team chose recycled wood that creaks slightly when walked on. “The idea [behind the flooring] was to give a sense of a place that’s existed, that this has a feel of history to it,” he says.

At the same time, the space definitely has some playful Buffett-inspired touches. The chairs at the bar, for instance, feature blown-up rum labels from island distilleries that have since closed their doors, while the bar back has a mirror with sea plane etched into it — a nod to Buffett’s love for flying. The liquor bottles, which provide the space with splashes of color, sit behind cabinet doors made with wire from parrot cages — a subtle joke that most patrons won’t catch but will be a fun discovery for those who do, says McBride.

To get to the dining area, patrons take a left turn around a corner — more about this aspect of the design later — and encounter a space that is at once dramatic, sophisticated and a touch lighthearted. The dramatic aspect comes most obviously from JWB’s exhibition kitchen, visible through a large window in the left side of the dining area. Above the window sits a large, Piccaso-esque mural inspired by spear fishermen at work. (Speared fish, it should be noted, is one of the restaurant’s specialties.) 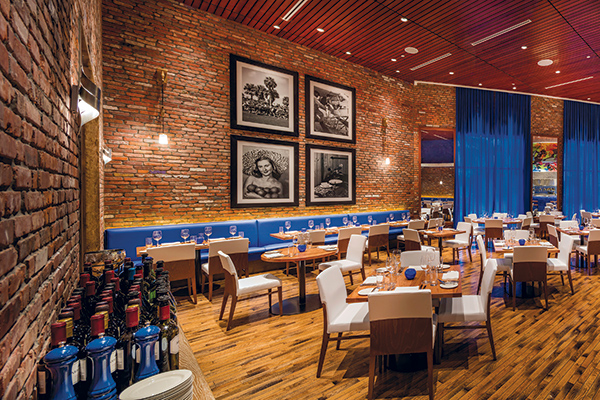 Archival black-and-white photos add a sense of fun and history to the space, while the non-parallel walls and wood slat ceilings with acoustic material help reduce noise.The action of the kitchen combined with the drama of the painting provide a real spark to the dining area. This energy helps prevent JWB from becoming too stiff and formal — something a Jimmy Buffett restaurant should never be.

“A lot of design thought has to go into a good open kitchen,” McBride says. “The goal is to keep everything that you want highlighted, highlighted. Mural above, action below. It becomes a major focal point in the restaurant, and it adds some energy to the space.”

Sophisticated (but not stuffy) can be found in the furnishings and colors. Chairs are white leather, while tables are a medium shaded hardwood. The flooring for most of the area is a medium-shaded hardwood, while some sections have herringbone-patterned brick. For the splashes of color, the restaurant relies heavily on ocean-inspired blues, visible on bench seating, the table’s tea candle holders and floor-to-ceiling curtains that help break up the dining area.

Fun comes in the form of some additional design touches, says McBride. For wall art, the chain found archival black-and-white photos of the Gulf Coast region, including images of fish being unloaded from a seaplane and a parrot eyeballing a key lime pie. The bathroom’s brick walls, meanwhile, are scrawled with graffiti, adding some playfulness and the long-lived feel a cannery restaurant would have.

Of course, not all the work that went into designing the dining area is visible to the guests. The McBride Company also spent considerable energy on the acoustics of the space. While loud and energetic may work for a theme restaurant like Margaritaville, it doesn’t fit with an operation like JWB. Like all fine-dining restaurants, this is a place meant to support meaningful connection, from businesspeople working on a deal to couples having a romantic meal.

Several design features help dampen noise in the space. To prevent sound from bouncing all over the room, for instance, the walls are non-parallel and made with different materials — brick in some areas, Venetian plaster in others. Even the placement of the tables and booths helps break up the sound. The wooden ceiling slats have sound-absorbing material placed between them, helping to quiet the room.

All of this design, of course, didn’t occur in a vacuum. As part of a larger operation, JWB had to be integrated into the resort as a whole.

While the property was built from the ground up, JWB didn’t benefit from being a new build. According to McBride, the space wasn’t designed for a fine-dining establishment. In fact, at one point, there were plans for the space to house a casual-dining operation serving three meals a day, not a high-end restaurant offering only dinner.

When the decision to build JWB was finalized, the designers were left with an L-shaped space that they would have never chosen from scratch, says McBride. The designers, though, were able to use the footprint to their advantage.

The restaurant sits just off the hotel’s main lobby. Diners enter the space in the smaller section of the L shape. This entire section serves as the restaurant’s bar area, with the bar itself directly facing the lobby. With this setup, the bar can serve guests who are relaxing in the lobby, contributing to the area’s communal atmosphere.

The designers also took advantage of the turn of the L. The turn has two main components, the host stand and the restaurant’s raw bar. By placing the host stand at the turn instead of at the restaurant’s entrance, there’s no barrier for people who just want to come in for a drink. In addition, the raw bar’s location at the knuckle means both dinner patrons and guests just grabbing a drink see it and order from it, says McBride.

Most important, though, is the dramatic reveal of the turn. Customers pass the host stand and are immediately hit with the dining area in all its glory — the white leather chairs, custom artwork and exhibition kitchen.

Another challenge of the space was making sure it didn’t detract from the overall resort experience. While the restaurant’s bar serves hotel guests during the evening hours, it is closed for most of the day. This could have detracted from the overall vibe of the space. “Dead lobby bars are bad. Nobody wants to see one at nine o’clock in the morning,” says McBride.

Instead of a dead lobby bar (or even worse, a dead lobby bar behind a steel cage), the designers installed sliding doors with plantation-style shutters. For most of the day, when the doors are closed, it just looks like a wall facade. As dinner approaches, these doors help create a dramatic effect.

“At four or five o’clock, you tilt the shutters open a little and give a preview, a peek of what’s inside. Then when [the restaurant] opens for dinner, the doors slide open and the action begins,” says McBride. “People love that, and we would never, ever have tried that if we weren’t forced to because of the space.”

While JWB was a late addition to the newest Margaritaville resort, it won’t be so going forward. With the success of the restaurant so far, the chain has plans to integrate it into other properties it operates, says CEO Cohlan.

The restaurant could even work in metro areas far from any beach, he added. Its luxurious materials, clean lines and Buffett-inspired atmosphere combine sophistication with relaxation, giving it an across-the-board appeal.

“There’s no mistaking this is high-end when you walk in, but at the same time, you don’t feel like you’re in a stuffy steakhouse,” Cohlan says. “It’s a happy place.”