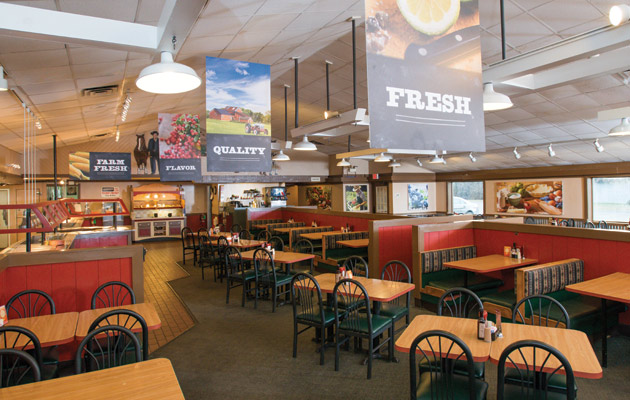 
To that end, darker, dated wood finishes in the old design were refreshed with warmer, brighter earth tones. Old wood paneling was painted what McDonald describes as "roasted-red pepper red" and trimmed in "espresso brown." Walls feature light colors above corrugated tin on the lower half and sport large photos adding pops of color and imagery of farm-fresh ingredients. Similar graphics, paired with the mission-critical words fresh, quality and flavor, appear on large banners hanging from the ceiling over the dining room.

"Throughout the restaurant we now have large-format food shots," notes Rice. "Some show individual products that we might feature on the menu, such as strawberry pie; some are back-of-the-house photos showing foods being prepped and some of the fresh ingredients that go into, for example, various pies and cakes on our dessert bar. Others show freshly prepared salads, fruits and other items that might go into some of the cold bar dishes. We even have holiday shots and environmental shots simply showing nice farm images but in a more contemporary way than our old ranch photos. They make a big impact when you walk in and help to create a fresh environment that supports our rebranding strategy but also continues to clearly state who we are."

The images aren't intended to promote specific menu items, Rice adds, but rather to convey brand messages and create a mood for diners.

The photo strategy represents one of many cost-effective design solutions that help create a fresh new look for the brands, one that puts a strong focus on food quality and freshness. The wall-mounted photos are embedded in styrene so they're durable, washable and staff can easily change out the images just by unscrewing a few grommets that secure them to backboards.

They are also affordable: McDonald estimates that all of the art required for one restaurant unit — roughly 12 pieces, a mix of 4-by-8-foot and 3-by-3-foot images — totals approximately $600. "Because of the photo technology that's out there now, we can afford to replace and refresh the artwork throughout the year," he says. "These aren't stock images; this is Jon's team photographing our food or representative products — steaks on the grill, bakery ingredients, etc. We're producing it, so it's really very efficient and affordable."

While the various design changes add up to a fresh new graphic identity for the brands, some elements of the old look remain. For example, no changes were made to the restaurant's footprint or layout, and existing seating and flooring remained in place, as did most of the existing lighting. The existing food bars were retained, but were refreshed with new lighting and new presentation styles (see sidebar).

"If some of the old components were complimentary to what we were doing, we kept them," McDonald says. "We're trying to transition from the old legacy to where we are now without leaving our legacy behind. We're not going to forget that we have a western ranch-oriented heritage."

"We tried to stay away from changing out tables and chairs and that kind of thing on this go-round," Sacco adds, "because we couldn't value-engineer that as much as we could some of these other things. The furniture is durable and fits in well with the new design. Down the road I'm sure there will be a new table and chair design, but in our research our guests weren't saying that the tables and chairs weren't relevant; they were saying the restaurant didn't feel relevant."

While the redesign strategy is still in its test phase, with the first completed unit open just a few months, Sacco and his team say the results so far are overwhelmingly positive. "We're consistently getting in the high 90th percentile on the fact that they're going to dine with us more often," Sacco says. "They love the changes that have been made and we've never seen numbers like this. We're pretty comfortable with and excited about where we're headed."