When Westfield, New Jersey’s Chez Catherine changed hands last October, its new owners decided to take the operation in a slightly different direction. It would continue as a white tablecloth French restaurant, but the menu would be more modern and a bit lighter, according to co-owner Stephane Bocket.

This change was accompanied by new design, one that features modern touches tempered by rustic elements common to the Provence region of France. The result is a light, almost airy space that complements the new menu.

To create a space that felt fresh, the designers first set out to make Chez Catherine feel bigger. The restaurant has a small footprint, with just 25 seats in the main dining room and additional 18 to 20 in the downstairs wine room.

To open the main dining area up, the owners replaced the tiles in the suspension ceiling with new white coffered ones. Though the height of the ceiling didn’t change, the new tiles make the restaurant feel larger, Bocket says.

Another structural change also opened Chez Catherine up — quite literally. In the previous design, guests had to come through two doors, the exterior building door and an entry way door. This interior door was removed as was the right-side entryway wall. The left-side wall was cut down by about a third and glass added in its place. These changes expanded the space and opened sight lines. The partial wall provided privacy to diners seated near the restaurant’s entrance.

“We did go with some color pictures from Provence, where you can see a field of lavender, a stone street, the seaport at Cannes. The color pictures make it feel more modern,” Bocket says. 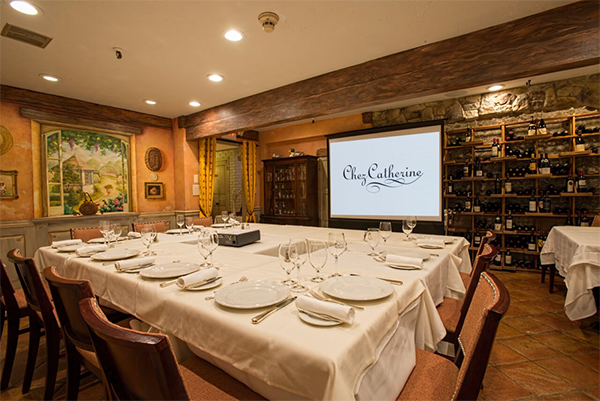 The interior walls are heavily textured, matching what one would find in older buildings in Provence. The downstairs wine room has also been remade in the style of Provence.

Before the redesign, the room was dominated by several mirrors, part of an apparent attempt to make the space feel bigger. Guests, though, could see their reflection in three or four spots as they ate. It was distracting. “A lot of people were not so happy at the beginning to go in that room. They felt it was not as comfortable as upstairs,” Bocket says.

The owners of Chez Catherine have steered into the curve, though, designing the wine room like a European wine cellar.

Guests encounter a stone arch entryway, giving a cue that the space is different from the upstairs. Inside guests find terra cotta tiled flooring and Provence-style textured walls. And, of course, the space is defined by large wooden racks filled with bottles of wine. The space, says Bocket, is now ideal for private parties and has been given its own audio/visual system to support such gatherings.

With Chez Catherine’s redesign complete, guests are responding well to the menu and matching look. They simply complement each other well, Bocket says.