Twenty-foot robots, blast holes in the walls, and tank tread embedded in polymer paneling all support the brand of this "better burger" concept.

While several better burger concepts have emerged over the past few years, Greensboro, N.C.'s Burger Warfare has a front of the house that is almost certainly the most unique among this, or any, segment.

According to owner and CEO Marty Kotis, the idea for the concept came when he and his team were researching burger restaurants.

"What we saw that was missing from the better burger segment was a theme. If you're in one of those better burger segment resturants and you're looking around, there's nothing to really reinforce the brand," he said. Kotis, then, decided to open a restaurant with a strong brand identity. Inspired by the space he had secured on Battleground Ave., along with the burger wars of the 1980s, he decided to open a restaurant with a futuristic military theme.

Being a self-described perfectionist, Kotis, along with his team, have reinforced this theme all through the restaurant, in ways both big and small.

Start with the big. Really big. Burger warfare announces its brand before you're close enough to even reach the sign on the building. This is achieved with a 20-foot-tall metal sculpture of a military robot sitting outside its entry. Three more 15-footers sit inside, poised to do battle.

Then there are two 28-foot bars/community tables, which Kotis said are probably the most photographed and commented on features at Burger Warfare. Instead of going with a product out of a catalog, the restaurant's team built tables that each have roughly 20,000 50-calibre brass shell casings enclosed in glass and lit with a red LED strip.

The casings, said Kotis, were bought at a military surplus auction, as were several other elements of Burger Warefare's design. 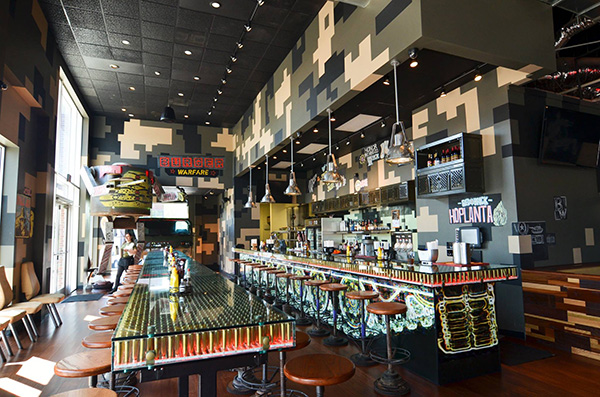 One of the restaurant's other signature design elements is the cab of an Oshkosh truck cab that diners can actually climb into; turning the ignition triggers an audio system of a truck starting and then idling. In addition, the bar stools are made of truck axles as bases topped with oak seats. Seats from humvees — also bought at auction — are used at tables and booths.

"We did a lot of government liquidation auctions. We've got enough 50-calibre shells to use for the next couple of restaurant bars and five more Oshkosh trucks," said Kotis.

The chain's showpieces don't end there. One of the restaurant's walls has a hole "blasted" through it — really just a square cut out and decorated with stucco and other materials. A video wall also shows military-themed clips and images.

If all this seems over the top, it's because that's how Kotis wants it. Given how quickly people whip out their phones to take a picture, restaurants benefit by providing customers with spaces that are worth photographing, he said.

"When we're designing restaurants now, I'm actually going around with my camera and thinking about, if I'm a guest, what I'd take a picture of and what I'd share. So we create these almost photo-ops in the restaurant and we'll add a logo back in around where they take photos."

Not everything at Burger Warfare is so over the top, though. The concept's brand is also reinforced by smaller choices, as well. The walls, for instance, are painted with a digital camouflage pattern, while the tables are solid camouflage colors. Even the fiber reinforced polymer in the open kitchen and on the front of the bar support the concept's identity. Working with a local supplier, the restaurant was able to have its fiber reinforced plastic (FRP) panels embedded with imagery.

"Instead of the standard white or black FRP that you would have in a restaurant on the back wall, we now have custom printed digital camo on our kitchen wall, and we had them add an x-ray version of a take tread on a bar front." 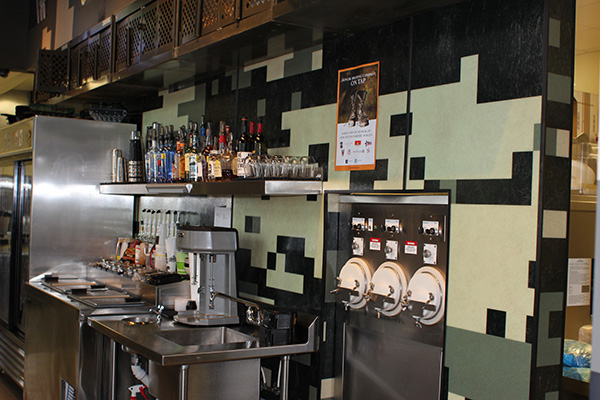 These designs, he noted, aren't simply painted on the surface of these panels. Using a gas permeation method, they're actually a part of the panels themselves and can't be scratched or scrubbed off.

So far, the response to the restaurant has been outstanding, Kotis said. While Burger Warfare only opened in February of this year, they're already planning an expansion to the lone location. The current store measures roughly 3,500 square feet and has 110 seats. The expansion will add nother 1,500 square feet, another 30 seats and space dedicated to carry-out and drive-through service.

Looking ahead, Kotis said he expects to open several additional stores in the coming years. None of these, though, are likely to be franchised, at least not yet. Ever the perfectionist, Kotis wants to make sure the restaurant, and the brand, is completely nailed down before he hands it to others. "We'll eventually look at franchising," he said, "but we want to have enough stores where there's nothing else to be figured out."