Trend: The Boom in Restaurant-Distilleries

Craft distilling is hugely popular and enjoying unprecedented growth — there are 1,315 U.S. craft distillers, according to the American Craft Spirits Association. Pair this trend with the popularity of gastropubs, and you’ve got the unique experience of customers enjoying on-trend pub fare while taking pleasure in the drama of seeing spirits made before their eyes, sampling it straight or enjoying a craft cocktail.

As exciting as this idea is for both operators and customers, creating these hybrid concepts presents some daunting design and construction challenges. These include building blast-proof rooms with alcohol-vapor sensors, high-flow fire-suppression systems and blow-out panels. Oh, and you may have to get a law passed first. 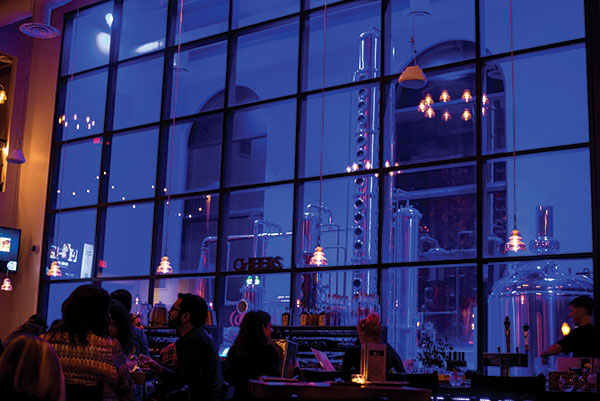 Photo courtesy of Social Still“It’s a unique business model,” says Adam Flatt, who co-owns Social Still with his wife, Kate. The “gastro-distillery,” as he calls it, is a “Frankenstein experience” that sets itself apart from other craft distilleries and the city’s thriving restaurant scene by combining distilling and dining housed in a historical Prohibition-era bank building.

“Americans are looking for new and unusual experiences beyond just trying and buying a new spirit,” says Flatt. “Social Still is a unique night out and dining experience that cannot be replicated anywhere else.” The setup is also a way to increase exposure of the spirits with signature cocktails and sophisticated food menus for a sampling experience that goes beyond the usual tasting room. Currently, there are eight expressions, including vault-aged bourbon, jalapeno vodka and hop gin, sourced from Pennsylvania grains and matured in rickhouses — the bank’s vaults.

“And there is nothing more stunning than a 100-year-old bank,” adds Flatt. With Social Still, he believes he is giving the historical building a new chapter and new identity. And even though the gastro-distillery opened in 2014, customers get the feeling that the place has been around forever. “This history has been lent to us; it’s part of our identity now.”

Because the bank is on the National Register of Historic Places, there were strict regulations and restrictions on preservation during renovation. Every step in the process had to be authenticated. 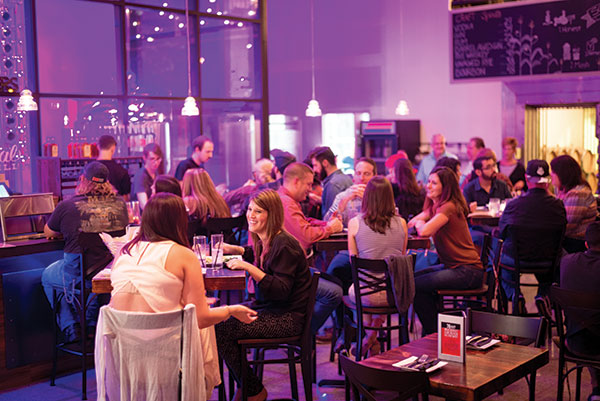 Photo courtesy of Social Still“A huge part of the choice for the building was that it was tall enough to house the still,” says Flatt. The bank’s ceiling is 22 feet high; the still is 20 feet tall. “We just barely squeaked in here.” Equipment consists of a 1,200-liter pot still with two separate distilling columns and a gin basket as well as a mash tun — all custom-made. Flooring was reinforced with extra steel beams to hold the weight of the still — and the liquid inside.

A glass wall was constructed around the production area so that every seat in the house has a view of the still and the process. “That’s our showpiece; that’s where the drama comes from,” says Flatt. The glass enclosure was not a legal requirement, but it helps to contain the noise and odor from the production process. The Flatts also installed safety elements like a negative-air system, which exchanges the air 10 times per hour. In the distilling area, one window is a blow-out panel, “sort of a safety valve” to prevent concussive injuries. The fire-suppression systems are equipped with high-flow nozzles. And carbon dioxide and alcohol-vapor sensors connect directly to the fire department. “Barrels of whiskey are considered flammables,” Flatt notes.

The space is about 6,500 square feet, counting the basement, main floor and mezzanines. Two-thirds of that is dedicated to the restaurant, which seats 80 with 15 at the bar; the rest is devoted to production. There is also a small retail outlet. Two bank vaults serve as barrel rooms for maturing whiskey and other spirits. One vault boasts a two-seat table, which customers can request. The old safety deposit boxes have been upcycled for use at the POS and hostess stations, and one of the storage rooms sports an antique vault door. Lighting is modern yet fits the concept: Replicas of cone-shaped glass electric insulators house the lights.

Despite the challenges, Social Still is a success, says Flatt, with reservation-only crowds every weekend. His daily schedule is rigorous: eight hours working on spirits production and then opening for dinner five nights a week. “It’s a labor of love,” he says. “You have to be passionate to do this job.”

The hybrid offers a strong advantage in a competitive marketplace. “While their food is amazing and design is great, there is nothing inherently unique about a restaurant and bar, but throw a distillery into the mix, and it’s something entirely new,” says Dwight.

The project was possible because of a law passed in 2014 that allows producers to distill and serve spirits in the same location. GrizForm Design was tapped for the assignment because the firm has designed several restaurants in town, but this job presented some unique challenges.

“The distillery has a very different set of rules and functions from those for restaurants,” says Dwight. The main challenge was walling off the production space with a fire barrier, creating a blast-proof room. It’s also equipped with a separate HVAC system, exhaust and air exchanges. “Alcohol vapors and a spark can be a bad combo,” he says, but quickly assures that the setup is quite safe.

Most of the fire codes required using solid walls with few openings or windows. “But we wanted to show off the process, so we had to dig around and find the right products — fire-rated glass and doors.” The custom-designed still has small portholes so that people can see the splashing liquid and boiling bubbles. The column still was so tall that a hole had to be cut into the upper floor to fit it in, where it can be seen from the bar. 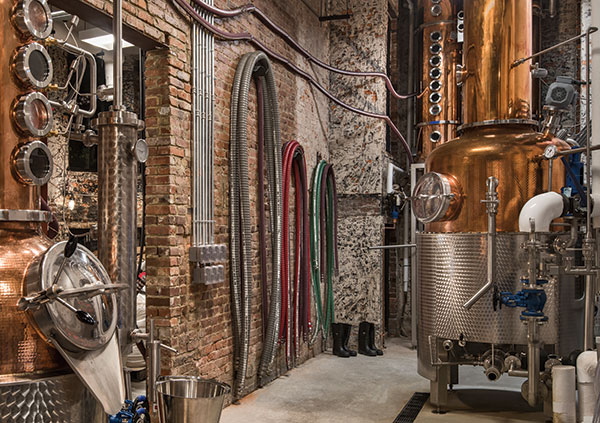 Photo courtesy of GrizForm Design ArchitectsIndeed, every customer in the dining room, bar and retail space — or even passersby outside — can view the distillery in action. “You can watch your booze being made while you sip a drink at the bar — that’s a unique experience,” notes the designer. Throughout the design, there are subtle nods to distilling. The mixed copper and stainless steel construction of the still is reflected in the use of mixed metals and mixed materials in the bar, the over-bar racks and foot rails.

District Distilling is situated in a series of row houses. The intact exterior gives the location a homey, residential feeling, says Dwight. For the interior, big sections of the walls were knocked down to create bigger rooms and connect the spaces; the walls and ceilings were stripped of drywall to expose the structure. Reclaimed elements were used throughout, such as wood salvaged from joists. “We let the old row houses shine; each of the interiors is individual, whether we wanted it to be or not. So we decided to embrace that.” A quirky mix of lighting adds intimacy in various areas.

The space is 7,800 square feet. From the entrance on the ground floor, the distillery is on the right, with the retail component on the left, including a tasting room and space for parties and private tastings. The retail shop is accessible by a separate entrance from the street and is also connected to the interior. “They are doing a robust retail business in addition to the restaurant,” says Dwight. On the second floor, the bar is directly over the distillery, and the dining room and kitchen wrap around. The dining room seats 115; the bar 55.

“There is a restaurant boom going on nationally, and craft distilling is a huge trend,” Dwight says. Synergy between the two concepts can be strong. There is, he admits, a much higher outlay for the hybrid than just opening a restaurant or setting up a distillery. “But in this case, I think the sum is greater than its parts.” 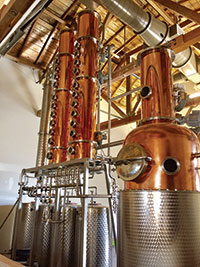 Photo courtesy of Lula Restaurant DistilleryPerhaps the biggest of the many hurdles co-owner Jess Bourgeois faced in opening Lula was getting legislation passed to allow his concept to exist. “One might think that New Orleans and the State of Louisiana would be lax in their liquor laws, but we quickly learned that the reality is the contrary,” says Bourgeois, who worked with a representative to pass House Bill 233 to be able to open the state’s first restaurant-distillery.

With years of experience working in high-volume restaurants, Bourgeois also noted the rise of craft distilling and had a dream of producing spirits from Louisiana sugarcane. So he and co-owner Bear Caffery combined the two ideas under one roof. Manufacturing the custom-designed equipment — two fermenters, a 450-liter pot still, two sequential 10-plate columns and a condenser that flows into three separate fractioning tanks — required a full year to complete.

Location was another challenge. Distilleries work best in industrial neighborhoods, but the restaurant component required an urban location to attract and be accessible to customers. “We found just that in an old building that is along the historic streetcar line of St. Charles Avenue,” Bourgeois says, “but space is limited, and price per square foot is a bit higher than if we would have selected an industrial area off the beaten path.”

The building was originally a furniture warehouse and showroom with a 9,000-square-foot footprint. “It is a great old building with exposed ductwork and inverted ceiling trusses,” says Frank Lauricella of Woodward Design + Build, the project’s designer. “We maintained much of the building’s historic character.”

Fermentation and distilling equipment occupies about a quarter of the space; the gleaming copper and stainless steel pot still is the first thing customers see when they walk in the front door of the restaurant and bar. Diners can watch the whole process, from fermentation to bottling — through a protective glass wall, that is.

Federal regulations mandated that the manufacturing area be sealed off from the retail, restaurant and bar space. There was a lot of red tape, says Bourgeois. “Approvals for distillation required permits of local, state and federal governments on top of the various retail permits required.”

Lula’s plans were subject to strict scrutiny from the State Fire Marshal, who assessed the distilling process and safety measures to ensure that customers and employees were kept safe. The space enclosing the still is a one-hour fire-rated room fitted with extra sprinkler heads.

Lula’s operation is allowed to make up to 5,000 cases a year. The sugarcane-based vodka, rum and gin is mixed into cocktails at the 25-seat bar and served to customers in the 140-seat dining room and on the 50-seat patio. A special events space, the Barrel Room, seats an additional 125. A small retail space, accessible from a street entrance, sells Lula’s spirits by the bottle.

Lula opened last November, the first — and, so far, only — restaurant-distillery in Louisiana. “We offer our customers a complete experience under one roof — the opportunity to see where and learn how the spirits are made, to try them straight up or in a cocktail and even paired with our food menu,” explains Bourgeois. “That opportunity to learn, try and experience Lula before deciding to take a bottle home is an opportunity you can’t quite find from a liquor or package store — and, I hope, that will build an appreciation and eventual loyalty for our craft and our brand.”