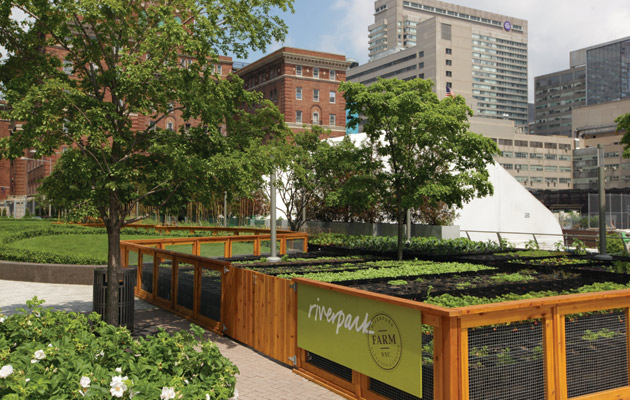 When it comes to local sourcing, many restaurants now take the concept one step further with on-site gardens and mini farms. In fact, hyperlocal sourcing and restaurant gardens ranked among the top trends outlined by the National Restaurant Association's "What's Hot in 2014" chef survey. While independent restaurants have led this trend, higher-volume operators like hotels and smaller, multiunit brands are beginning to adapt the garden infrastructure for their larger-scale needs.

At the Chicago Palmer House Hilton hotel, the 25th-floor rooftop garden yields a variety of tomatoes, peppers, herbs, greens, peas and other produce — even honey from two beehives — for the main restaurant, Lockwood, as well as for the special menus in Lockwood Bar and Potter's Lounge. Throughout the season the garden uses hydroponic water towers to grow various types of lettuces, from arugula to mesclun greens. 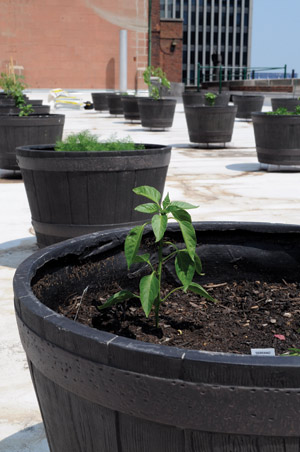 The Palmer House Hilton hotel’s 25th-floor rooftop garden yields a variety of produce and honey from two beehives for the main restaurant, Lockwood. Throughout the season the garden uses hydroponic water towers to grow various types of lettuces, from arugula to mesclun greens.Every two weeks, Sara Gasbarra, founder of Verdura, a garden build-out and management company for restaurant and other foodservice gardens, tends to the 84 raised boxes to make sure the plants are growing well and to do any necessary replanting. In the meantime, executive chef Joseph Rose and other hotel support staff manage, water and harvest the garden boxes on a daily basis. The boxes are self-irrigating and set on a timer so they need less watering by hand and can weather any especially hot days.

A beehive manager also comes by regularly to tend to the hives as well as the marigolds and sunflowers planted for the bees. Last growing season, which ran roughly from May to October, the hives produced a gallon of honey. In preparation for the cold Chicago winter, the beehive manager will tightly wrap the hives in plastic to shield the hibernating bees from wind and the elements.

This year, Rose plans to work with hotel management to build out more seating for special events and VIP cocktail receptions in the garden. "Because of all the produce we grow, I rarely have to purchase any additional herbs or lettuce greens for the restaurant," says Rose, who showcases the other specialty produce, such as Swiss chard and Japanese eggplant, in smaller portions for special menus and dinners. "I once made a large batch of lemon oil using extra lemon balm we grew, lemon zest and a little lemongrass for vinaigrettes."

Due to the limitations on yield, the Palmer House uses produce from its on-site garden mainly for dinners
at Lockwood, rather than for breakfast, lunch or room service for the 1,640 hotel rooms. Rose sources from local and organic farms to meet other bulk produce needs. Lockwood alone brought in $6 million last year in revenue, a number that gives a sense of the volumes involved.

The kitchen has strict food safety plans for handling, cleaning, storing and preparing the garden's bounty, just like any other produce entering the hotel. Rose and his team use a natural vegetable wash for all the produce, since the staff use no chemicals or pesticides to maintain the garden. Fertilization sources come from hotel compost and other farm output.

Tom Colicchio's Riverpark restaurant in New York City went beyond a simple rooftop garden concept, partnering with the Alexandria Center for Life Science, a medical campus where the restaurant is located, to build the on-site Riverpark Farm, which grows vegetables and herbs.

The farm, a temporary mobile setup using 7,000 milk crates, was constructed just outside the restaurant's main doors in 2011, a year after the restaurant opened. The not-just-hobby farm grows about 5,000 pounds of produce per growing season in the stackable vessels.

Riverpark Farm's first location at Alexandria Center's West Tower took up a 15,000-square-foot unused plot of land where development had stalled during the financial crisis. When construction resumed in the fall of 2012, the farm team was able to move the milk crate collection to the north side of the center's plaza in less than 24 hours. The crates make for the perfect flexible option for urban farming solution because they save space and staff can move them when necessary; they also have handles. 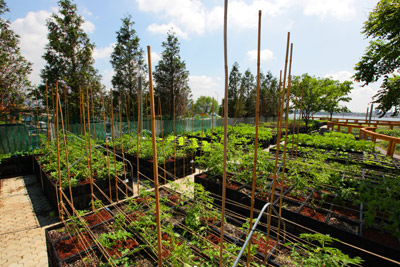 When deciding what to grow, chef Sisha Ortúzar works with Zachary Pickens, the farm manager, to develop a plan for the season that will meet the restaurant's specific needs. "Each winter season before we start to plant new seeds for spring, we meet with Zach to look at the last season's production and the flavor of the crops we selected," Ortúzar says. "The selection becomes more informed each year, because we learn what makes sense for our climate and space and what makes sense for our menu. The chef team comes to the planning sessions with crop wish lists for new plants to try, and then we see how well they do for us and increase their production, or we remove it from the list."

"Crops like lemon verbena, ground cherries and bronze fennel can be difficult to source, so it makes sense to grow them so we know we will have them for the season and minimize having to compete with other restaurants at the markets," Ortúzar says.

The restaurant showcases the produce both as specialty items and in succession to meet ongoing needs. "We plan plantings so the kitchen isn't hit with the crop's entire yield all at once," Ortúzar says. "When one plant is fully mature, we have another still developing behind it. Also, what the farm produces, the restaurant has to use. If there is too much, we preserve what cannot be used and use it throughout the year."

During the colder months, the restaurant uses low tunnels that have been set up in above-freezing temperatures warm enough to produce certain crops. Some plants grow slowly throughout the winter, while others may hibernate, but they stay alive, ready for the next season. "It's worth the effort to grow throughout the winter in this way because then we'll have a head start on spring and not have to wait until it's warm enough for new plants to germinate," says Ortúzar.

On a daily basis, the farm management team waters, harvests, tracks, plants and records everything from plant behavior to what's been harvested. The chefs and farm staff also meet regularly to plan ahead as well as build and manage the compost piles. 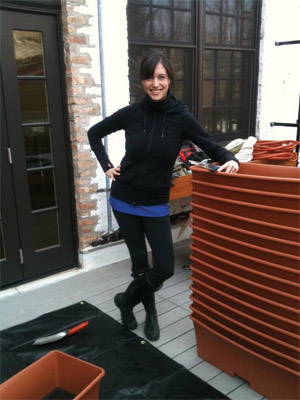 rd+d: Do restaurant gardens have to be big to be effective?

SG: The first thing I always tell my clients is the garden is not going to replace everything they purchase from farmers or purveyors. These gardens will cut down on some costs, but they are also great marketing tools. Diners seem to like to eat at restaurants knowing they are eating some produce from the garden and in some cases be able to look out on the garden. Size doesn't necessarily matter, but they have the same benefits. Restaurants don't need a massive garden on their roof — they can easily start with some planter boxes on their sidewalk or off the back door of their kitchen.

rd+d: How do you help restaurants decide what to grow?

SG: We look at a crop list and determine what makes sense for them based on the size of the garden and their operation. If you only have a few raised boxes, it doesn't make sense to grow tomatoes because the yield is not large enough to warrant any big difference. It might make more sense to grow just unique herbs or other produce as more rare finds and specialty items.

rd+d: How involved are the restaurateurs you work with in maintaining their gardens?

SG: Throughout the season, the restaurants are going to do some maintenance. I visit a couple times a month to check on things, but the restaurant needs to focus on harvesting regularly. It makes sense if they have a point person who will oversee the garden and the entire project from the start of the season until the end. A successful garden requires constant maintenance and attendance; crops need to be fertilized, weeded, pruned, staked and watered, so it's a bit of an investment. As far as irrigation, it's best to have a system of tubing that runs on a battery-operated timer to water typically twice a day. I also use drip irrigation through a water source on the roof rather than spraying or standing water so the planter boxes stay consistently moist, but not over- or under-watered.

rd+d: What is the cost of some of the restaurant gardens you have helped build?

SG: Costs can range anywhere from a couple thousand dollars to upwards of $10,000, depending on size and labor needs. In many cases these costs can be justified as a marketing expense, especially if the restaurant shares what they are growing in the garden online and through their social media channels.

rd+d: How should gardens be closed down for the season?

SG: All of the annual plants that are spent are pulled, root and all. As for perennial herbs such as sorrel, sage, lovage, tarragon, etc, I cut them down to about two inches above the soil to promote new, healthy growth in the spring. If certain herb cuttings, such as sage, rosemary and thyme are still green and usable in the kitchen, they can be packaged in resealable plastic bags and frozen. Restaurants can also save more delicate herbs by processing them with extra virgin olive oil and freezing them in ice cube trays. Excess chili peppers and onions can be dried in low-temperature ovens or dehydrators and ground for homemade spices and seasonings. Seeds can also be collected and reused for the following year to save money and to record favorite varieties grown.