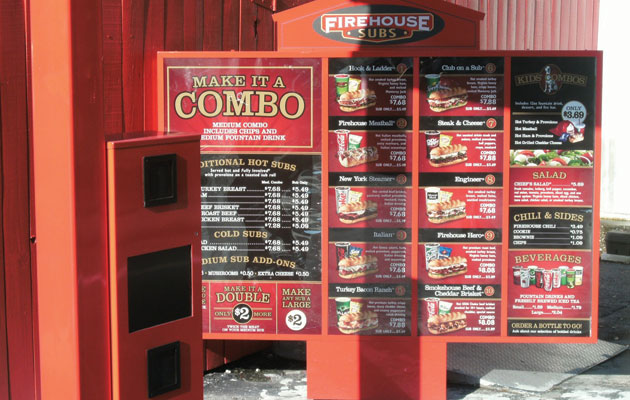 Steering Toward Higher Profits with Drive-Thrus

Firehouse Subs may not be fast food — its 500-plus restaurants fit squarely in the fast-casual column — but CEO Don Fox wants to take a page from the QSR handbook. A QSR veteran himself, joining Firehouse in 2003 after 23 years at Burger King, Fox is targeting drive-thru as a way to build revenues. Preliminary tests are underway, and the chain plans to start introducing drive-thru options to its franchisees as early as this summer.

"We actually started working with drive-thrus in 2003. We had only about 60 restaurants in the system then, and there were a couple of freestanding restaurants — one a former Taco Bell and one a former Miami Subs — that franchisees had the opportunity to lease," Fox says. "They had existing drive-thrus so we tested it. At the time, however, it wasn't uncommon for our speed of service to be in the 10- to 12-minute range. That's not what most drive-thru customers are looking for, so we put a hold on any future development."

That hold has now been lifted, thanks largely to advances in equipment technology that have enabled significant speed-of-service improvements. Firehouse is again testing drive-thru service, and this time around the results look promising.

Launched last spring, the current test involves two Florida units, one a freestanding building in Kissimmee that had a pre-existing drive-thru lane, and the other in Sarasota, in a former bank building with a drive-thru lane in place. Both had been operating pick-up window service for phone and fax orders, and so they were easy and inexpensive to convert to drive-thrus. Prep station layouts were reengineered for better flow, and minor mechanical work, including water sourcing for steamers, was done; but no structural work was required.

"Our speed of service is now excellent," Fox says. "We're down to four minutes from menu board to food delivery. Based on the performance at those first two units, we're now also testing drive-thru at a unit in Waycross, Ga."
Faster speed of service is credited to a combination of factors, the most significant of which is a more efficient steamer for heating sandwich fillings. "We've also reduced the volume of product that can be steamed at one time, which has shortened the heating time," he says. "While in the first two units in 2003 we just made do with what was there, this time we've engineered the layout to improve ergonomics and reduce the number of steps employees take. We also have a better sound system, which saves time at the point of ordering, and digital display order confirmation. All those things chip away at service time. With drive-thru it's a matter of engineering for seconds."

In the test units, sales at the drive-thru average 30 percent of total sales. While well below the QSR industry norm of 65 percent to 70 percent, Fox feels that as a fast-casual chain the lower percentage is on target. "Ultimately, I want people to eat inside our restaurants," he says. "We're not fast food. We deliver the food to your table in open baskets, not pre-wrapped. We have a lot of ambiance. Eating inside is how our customers have the best possible experience and get the absolute best food quality and level of service. If I'm in a situation where I have 60 percent to 70 percent of sales at the drive-thru like a traditional QSR, it's only good for us if it's incremental."

As such, he says the goal for Firehouse is for the drive-thru to account for 30 percent to 50 percent of sales. To date, the 30 percent rate he's seeing is, indeed, largely incremental. While still being evaluated, the performance is encouraging, he adds, because no significant efforts have been made to merchandise drive-thru. "Creating awareness is a challenge. With more than 500 restaurants in the system that have always operated a certain way, people don't think about drive-thru when they think of us. That will take time, especially as we've only implemented it in a few isolated locations without the benefit of larger market-scale promotions. Even so, the sales have been pretty strong."

Fox cautions, however, that real estate considerations will weigh heavily on the chain's decision to aggressively pursue drive-thru development. In endcap units that have a provision for drive-thru, a window and a lane in place, conversion could be quick and relatively inexpensive — $25,000 to $30,000, he says. However, many endcaps don't have production facilities located along an external wall, which is typically used for windows and visibility into the dining room. In such situations, he estimates renovating to relocate the kitchen and install a drive-thru could run $100,000 or more. And while a drive-thru could have the company seeking more freestanding locations, payback for franchisees on those could be significantly longer.

"With our current model, it's not unusual for a franchisee to be able to get a Firehouse location open for $200,000. On our average unit sales volume of $660,000, it's a one-to-three investment-to-sales ratio that's very attractive," Fox says. "If you're in a location where you'd have to do a lot of site work, it could easily mushroom into a very pricey project. And if you're developing a freestanding site from scratch where you've got a $1.5 million investment in real estate, construction, equipment, etc., you may ultimately be able to do $1 million or $1.2 million in sales there, but it's still not as good an investment as the $200,000 for a $660,000-a-year Firehouse. So there's a lot for the franchisee to consider."

They'll have an opportunity to do just that at the chain's annual franchisee conference in June. There, Fox plans to present a year's worth of drive-thru test results and to announce what the go-forward strategy will be, to what extent it will be approved as an option and what standard Firehouse drive-thru packages will look like.