Transforming a restaurant from one distinctive brand to a very differently themed establishment is hard enough. Try renovating the space while keeping the old business open. 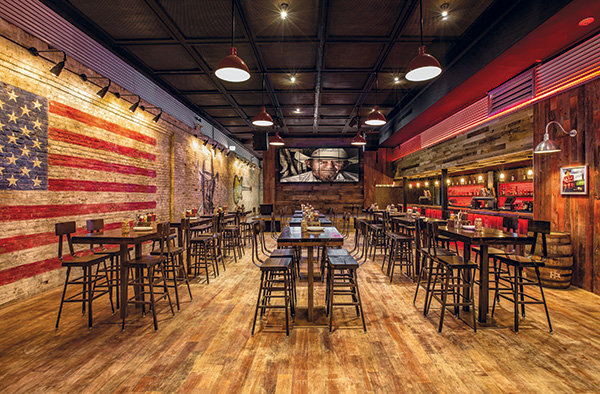 Old Crow’s flooring features six-inch-wide planks that were stained red mahogany before the redesign. The project team bleached the color out of them to make the floor fit the design.That was the top challenge for owner Sam Sanchez in a project that turned an Irish pub, John Barleycorn, into a hip honky-tonk barbecue joint, Old Crow Smokehouse, in Chicago’s River North area. Sanchez had the confidence to tackle this formidable task based on his expertise earned from decades in the construction business, with a long list of restaurant projects to his credit.

The result was a three-month, phased interior makeover with just a two-week shutdown between the demise of John Barleycorn and the launch of the nascent Old Crow Smokehouse. “Our hardest challenge was scheduling,” Sanchez says. “We didn’t want to close John Barleycorn for three months because we had a lot of events going on there.” 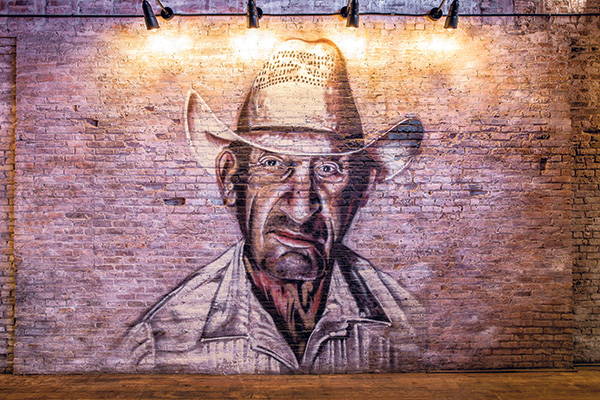 Old Crow features hand-painted murals of cowboys and other images of the Old West done by local artist David Bozic. To meet the ambitious deadline, the building team used a rapid, design-build approach, beginning with a three-week initial design period. “It was one of the fastest projects we’ve ever done,” says Rocco Laudizio, principal with Chicago-based Slick+Designusa. Laudizio had teamed with Sanchez, also president of EMC Construction, on numerous past projects and was accustomed to working on Sanchez’s challenging schedules. And it’s a good thing he was.

Tight coordination among the design team, Sanchez and the various trades was critical to maintaining the project’s rapid pace. Laudizio and Sanchez’s familiarity with each other’s communication styles and habits was an advantage. So too were Sanchez’s long-time relationships with subcontractors. “I’ve worked with the same plumber and electrician for over 20 years,” Sanchez says. He’s earned loyalty from these tradespeople by consistently paying them promptly and in full. The mutual respect developed over the years means that the subcontractors are willing to rearrange their schedules to accommodate Sanchez’s needs, and they did so for this engagement.

After the basic design — floor plan, elevations, walls and lighting — was approved, the materials were ordered immediately. Then Laudizio filled in the design details. Fortunately, both designer and contractor were already familiar with the structure due to their work on the John Barleycorn project, so there were no surprises to be found behind the walls.

“This was a cosmetic redo,” Laudizio says. “Only non-weight-bearing walls were moved.” One support column did pose a puzzle, as it had to go right through where the bar was to be situated. Rather than devising a way to hide the beam, the counter was cut to fit around it. In the end, this workaround seemed to fit the overall unrefined look of the space. “It looks cool,” Laudizio says. 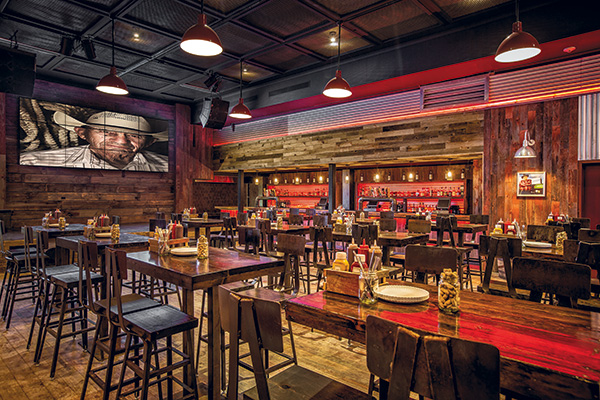 This is the first Old Crow location featuring rustic communal tables.Once construction was underway, Laudizio had to stay fully engaged. There were design changes requested every week, and it seemed that Sanchez’s team could build whatever Laudizio designed almost as fast as they received the plans. Workers put up temporary drywall barriers to partition off areas that were under construction. These walls were painted black to make them less conspicuous.

The kitchen area was moved, and during the construction of the new kitchen, the existing one remained operational until the two-week shutdown preceding the opening. During that time, the old kitchen was converted into a bar.

Construction of many elements, including bussing stations, bar tops, back-bar display cabinets and the reception desk, occurred offsite in EMC’s local shop. These prefabricated features were installed at the restaurant in rapid-fire fashion.

Although there were no major structural alterations of the 7,000-square-foot space, the cosmetic changes were thorough from floor to ceiling, as the classic Irish bar aesthetic gave way to a “modern take on country barbecue,” Laudizio says. The site was Old Crow’s fourth location, and major thematic elements, such as the brand’s signature gray-and-red barn wood and corrugated steel cladding on most walls, had already been established at the three preceding Old Crow eateries. This location, though, demanded some new flourishes. “We wanted to add a little more detail because of the trendy River North downtown location,” Laudizio says.

This location was the first to include elevated seating booths. Laudizio wanted something unique to highlight this area and chose used whiskey barrels. The supplier cut the barrels back to one-third size and re-strapped them to hold them together.

After the barrels arrived in Chicago, EMC’s workers used a branding iron to imprint the image of a crow, the restaurant’s symbol, on the barrel bottoms. The objects were then mounted on the wall above the booths to appear as if they protrude through the wall. It was a little tricky to arrange the barrels around TV monitors also embedded in this wall, Laudizio says. Booth seats feature denim and saddle brown leather upholstery, speaking to the Western milieu that permeates the space.

Also on this wall, multicolored RGB LED lamps provide backlighting — usually of a red hue, but that can change for special occasions (green for St. Patrick’s Day, for example). The use of LEDs throughout the space creates a contemporary lighting effect that brings a modern touch to the otherwise retro theme. Hiding the light sources from view was critical to Laudizio’s vision, he points out. If the bulbs were visible, customers could see individual dots of light, making the effect appear too high-tech, which would have clashed with the Old West vibe.

Another unique highlight is the hand-painted murals of cowboys and other images of the Old West done by local artist David Bozic. These mural decorates a brick wall that had been exposed after removal of a section of drywall. Scattered on other walls, black-and-white landscape photographs taken at Hunewell Ranch in Bridgeport, Calif., echo the Western theme.

Inspired by the barbecue theme, Laudizio advocated suspending diamond-patterned metal cooking grills from the 16-foot ceiling. Sanchez, at first, was taken aback by this plan. “He said, ‘Are you kidding, Roc?’” Laudizio recalls. The idea was to reduce the impact of the ceiling height to provide a more intimate feel, Laudizio explains. Sanchez trusted Laudizio’s instincts, but it wasn’t until after Sanchez saw the first few grill pieces installed that he came around to the vision.

A custom-built chandelier, crafted from a repurposed 12-inch-by-12-inch wood column to form a cross-shaped base, hangs in the center of the restaurant. An artful tangle of some 60 LED vintage exposed Edison-style bulbs hangs below the wood. This conspicuous chandelier also contributes to the lowered-ceiling effect. The lamp’s wood was cut from a column that Sanchez had stored from the demolition preceding the conversion of the space into the John Barleycorn pub, and that wood has also been reused for a few other elements.

Among these were joists repurposed for bar tops, which were emblazoned using the Old Crow branding iron. Industrial-style barstools were crafted from metal and reclaimed wood at EMC’s workshop. So too were the rustic communal tables, also branded with the Old Crow iron, and chairs. 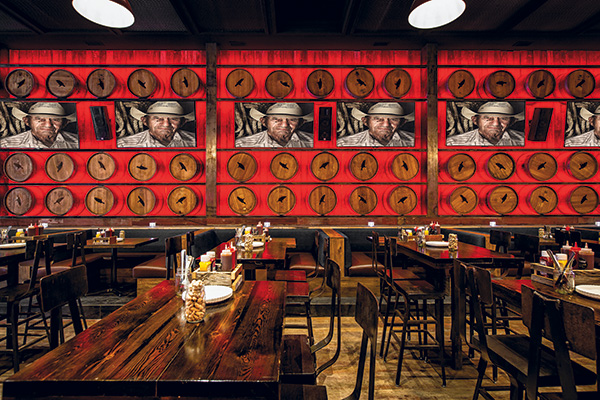 Whiskey barrels adorn the walls above the elevated booths. The supplier cut the barrels back to one-third size and re-strapped them to hold them together. The barrels were branded with the image of a crow, the restaurant’s symbol.Lighting elements embody the rustic aesthetic. Crimson red barn light pendants permeate the space, while simple antique cage lights hang above the two bars. Galvanized steel domed barn light sconces add to the retro-ranch ambience. Old Crow uses Edison-style LED bulbs that achieve an antique look in an energy-efficient format. Other decorative touches include a neon sign of an arrow pointing to the restrooms and a collage of authentic vintage road signs and eclectic ads against the barn wood lining the walls.

Flooring consists of solid six-inch-wide planks that were stained red mahogany before the Old Crow redesign. “We bleached the color out of them,” Laudizio says, “then applied a matte clear coat. It now looks like it’s been like that for 100 years.” Porcelain tiles that resemble rusted metal were installed in front of the bar. “It looks like there are steel plates in the floor,” he says.

The facility’s second-floor which hosts parties and other special events, was left untouched by the project. Featuring a retractable roof, the space includes a full bar and dedicated restrooms, making it like a stand-alone facility. The downstairs kitchen serves the area, but otherwise it operates almost like a separate business. Thus, leaving it alone made sense and saved money. 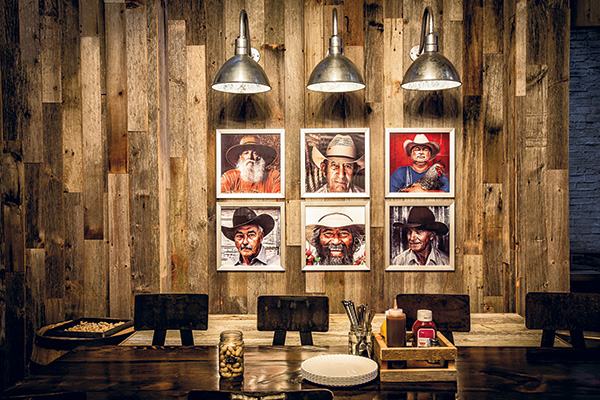 The city of Chicago designated the building an ORANGE-level historic landmark, making any exterior alterations subject to approval. The most significant changes involved the street-facing windows. The fenestration’s arch shapes were not in sync with the barn theme. The solution was to use barn wood frames to make the windows look like typical square-shaped barn windows. Since the structure was not permanently altered with this approach, the aldermen gave their blessings to these changes.

Some elements, including the addition of exterior LED lights, did not pass muster in the historical review. In the end, keeping exterior alterations to a minimal was the right strategy to ensure approval. “We got about 75 percent of the items that we designed into the program,” Laudizio says. For part of the year, the most notable exterior feature will be a street-side outdoor patio that will seat 30 diners when the weather is agreeable.

The end result of the interior redesign followed the plans exactly as intended, a credit to the tradespeople that realized Laudizio’s vision. “If you look at the renderings, and then at the actual space, they look exactly alike,” Laudizio says in amazement.

As expected, the reborn business saw a change in the makeup of its clientele and in the habits of patrons. The daily lunch and after-work crowd diminished as the establishment became more of a special destination than a regular habit. “At John Barleycorn, we had a lot of regulars in business suits and ties,” Sanchez says. “We’ve kind of lost them. Barbecue is something you don’t want every day, but something you crave.”

The executive chef responsible for fulfilling those cravings, Tony Scruggs, came on board after a serendipitous meeting with Sanchez during a break from the filming of “Master Chef.” The program’s producers had chosen another Sanchez restaurant, Moe’s Cantina, as the setting for one of the program’s contests. The pair chatted during some downtime, and Sanchez later offered the barbecue master the opportunity to preside over the kitchen of the Old Crow venture.

Sanchez says Scrugg’s custom rubs, which the chef markets on his own, and the slow smoker-cooked recipes elevate the food a step above other barbecue restaurants. “I used to think the best part of barbecue was the sauce,” Sanchez says. “Now, the meat comes out so well, I don’t even use sauce.”

Sanchez hopes Old Crow’s formula will have broad appeal beyond its Chicago stronghold. He’s developed a franchise book and has his sights set on expansion. He’s also in the planning stages of adding corporate-owned sites in Cincinnati, Ohio, and Anaheim, Calif., to join the existing sites in Chicago’s Wrigleyville neighborhood and Huntington Beach, Calif.

For its part, the River North location raised the standard on the brand’s decor, and new sites will likely embrace some of those touches, including the custom-made murals and LED lighting effects. The distinctive Old West theme, with some modern elements such as numerous flat-screen TVs and backlit walls, stamps Old Crow as a distinctive brand. Time will tell if that will help fuel a franchise enough to gain widespread appeal, but this downtown Chicago project can only help to advance that goal.