The 665-room Hershey Lodge is celebrating 50 years in 2017. And Lebbie Lebkicher’s, Hershey Lodge’s main lobby restaurant, is undergoing a concept overhaul. It will reopen in mid-May as contemporary American restaurant Fire & Grain. 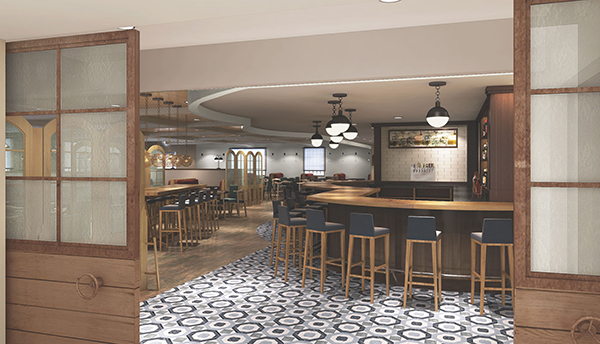 The 2,800-square-foot Fire & Grain will serve comfort food in a relaxed setting. With a capacity to seat 272 guests, various dining areas will provide modern bar seating, classic tables and booths, and larger tables with banquettes for flexible group seating.

Hershey Lodge partnered with Shea Inc. of Minneapolis on the project. “We’ve had a relationship with Hershey for the last seven or eight years, and we did a good amount of work at the Hershey Hotel,” says Tanya Spaulding, principal at Shea. Through that relationship, Shea was introduced to Hershey Lodge. “We worked with the former general manager to assess food and beverage at the Lodge for opportunities to refresh and to give relevant food and beverage solutions to guests. Through that, we discovered Lebbie’s was an underutilized restaurant opportunity.” 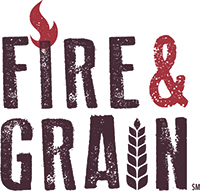 The team worked to brainstorm and develop menu concepts to fill the gaps that existed at Hershey Lodge. “We nicknamed it ‘From Breakfast to Beer’ because we needed a concept that would be an incredible place for families and business travelers to go for breakfast but one that would also convert to a restaurant that would draw people in for lunch and dinner,” says Spaulding. Lebbie’s had only been open for breakfast and lunch and other dining options on the property were often crowded at dinner.

“We couldn’t sacrifice the breakfast business,” says Spaulding. The space had to transform for its various and disparate dayparts. “The simple solution was to create a bar that would be a mainstay of the restaurant.” 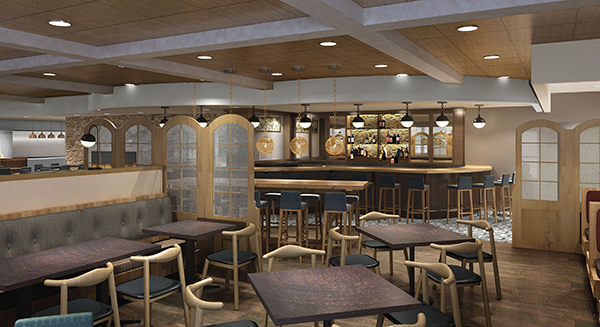 At night guests will be able to order dinner and drinks at the bar, which should be attractive to business travelers. In the morning, staff will remove the bar stools and sliding mirrors will cover up the back bar, creating a family-friendly tableau for breakfast items.

Shea also expanded the kitchen, bringing it forward into the dining space and creating an open kitchen, upping the theater of the space and increasing the kitchen’s capacity. “I think the biggest challenge we had to overcome [was the] limited kitchen capacity,” says Spaulding. The team pushed and challenged each other to come up with a solution to increase kitchen capacity without sacrificing seating and service. “The biggest and most relevant focal point was bringing the kitchen to the front. We brought the theater of the bar and the theater of the cooking into the middle of the room. The bar extends to the kitchen, kind of like a chef’s counter,” says Spaulding. “It gave us a fantastic focal point.” 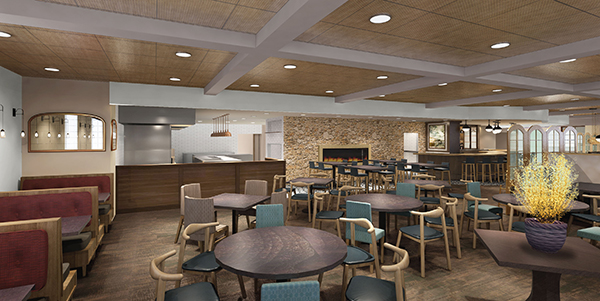 The new design also features a fire element between the space to reinforce the warmth of both.

Because the restaurant had to fit within the confines of the existing Hershey Lodge, which is not being renovated, the designers opted to bridge the two spaces by enhancing the exterior with stronger signage and putting the host stand in the lobby. The result is an immediately welcoming space. Some of the materials and elements used in inside were replicated on the exterior of the restaurant facing the lobby. “As you approach you see some nice wood doors that don’t feel out of place but serve to introduce the space,” says Spaulding.