Andy Simpson, Design | Oz Rey,Food Hall DevelopmentThe Creep is something I have seen at every single chain concept I have worked with as, over time, the kitchen becomes larger and larger, with more and more equipment to meet every possible circumstance. The Creep is caused by a lot of things. Many designs become too heavily influenced by the honeymoon period — when a restaurant is new, sales may be more than twice what they will be over the lifetime of the business. The operations people involved in the design are often thinking about what they see during openings, and it’s natural those planning new unit design are reacting to openings. There is plenty to learn from observing what happens at openings and during peak periods. However, be very careful what you do with the information gleaned from those experiences. It can lead to solutions that are overdone.

As a brand gets older, more and more people have a hand in it. The menu has evolved, and a number of people have modified the design. It can be very difficult to unravel the evolution and determine what is important and what isn’t.

Everyone loses some perspective when they work at a company for a long period of time. It’s similar to the way a person loses perspective if they don’t travel much, if they don’t seek out new experiences or meet new people to see how others live. When you drive to work the same way every day, it’s amazing how much you miss. I think it’s very important to have key operations personnel spend time at other concepts.

Typically, taking on The Creep starts when there is change — a major shift in direction or a new prototype. If you are leading the change, beware. Questioning things puts you in the crosshairs, and it’s not always the easiest thing to suggest looking at things in a different way. I worked with one brand that had been doing the same thing for so long, going into the restaurants felt like stepping into a “Back to the Future” movie. It was very difficult not to offend the sensibilities of those who had been involved. They had done a great job, but many years later, it was tough to come to terms with the fact that something had to give. My suggestion is to walk carefully, listen a whole lot more than you talk and gather information from all possible sources.

To really figure out what is needed and what isn’t, an up-to-date must-have list has to be developed. It’s crucial to start by having a comprehensive discussion of what the must-haves actually are. This process must begin with defining what the concept really is and where it might go. As consultants or people working at a brand, we sometimes find that the overall definition and direction isn’t as clear as it should be. It may be that the those involved don’t understand they even have a definition problem. Prototype work often ends up in a larger discussion about concept definition and direction.

When I am trying to figure out what the must-haves are, I don’t share my initial list in any great detail at first. During the investigation period, it’s often suggested that a committee be formed to work on the design. The problem is that a committee isn’t an effective way to design. It’s too abstract. Stakeholders need something to react to. It’s on the project lead to take in all the information and create something that a committee can react to first.

For the kitchen, obviously, you have to start with menu and spend a lot of time observing the restaurant’s operations and traffic patterns.

Talk to the people doing the work and ask a lot of questions. Make sure you understand not only what is being served but how much. Understand the product mix. Study the product mix by daypart very carefully. There is no way in the world to do a good job at this by sitting at your desk. You can’t redesign a really good kitchen without observing the existing one.

Get others to help. Most equipment manufacturers have good reps and R&D people who can review existing equipment and practices and offer ideas.

Observe the menu execution at older locations as well — not just new ones. This might be the most important guideline to follow. Problems at newer locations are the result of The Creep. Often, people don’t remember how it was — and possibly still is — being done at an older location. Just about every concept began in a simpler way and evolved. Acquiring this institutional knowledge can build a strong argument in favor of doing things simply. It can also provide valuable intel about why some change was needed. 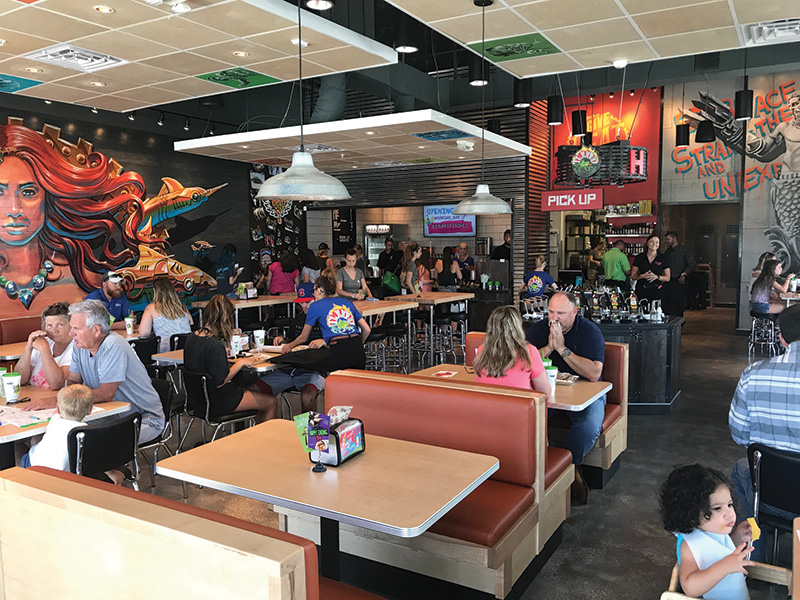 Do not work on kitchen design without considering the rest of the building. I know this may sound obvious, but I have seen kitchen design being done completely outside the context of the overall building or space. It’s easy to say “I need this” and “I need that” when there are no repercussions to deal with.

Understand the business model and costs for the entire investment. The biggest single mistake I see many designers make is not understanding the big picture. The investment cost for the entire unit has to work for the model. Give and take on the entire project is needed to make this happen.

Get some hands-on experience by doing it yourself. I know a lot of restaurant executives who rarely, if ever, work in the restaurants they lead. What a huge missed opportunity. If you don’t like working at a restaurant, then chances are, you’re not so good at designing them, marketing them or selling to them. A few years ago, I was working for a, let’s just say, “very aggressive founder.” One day, while looking at a design I had done, he said, “Have you ever run the expo line at one of our restaurants, Sparky?” When I said no, I hadn’t, the conversation was over. I went to one of the restaurants that afternoon, started learning and remembered exactly why I have been in the restaurant business my entire career. I love it.

Once you have done all the up-front work of observation and research, you can share your list of must-haves and want-to-haves.

The things you didn’t put in — the items “missing” from The Creep — can now be discussed in a way that forces a productive conversation. When in doubt, arguments that favor the guests first can usually get everyone on the same page.