Huddle House has been pursuing a small-town strategy for the nearly 50 years it has been in business. In 1964, John Sparks opened a restaurant in Decatur, Ga. A football fan, he wanted folks to “huddle up” to good food, thus the name was born. Huddle House restaurants now are found predominantly in the Southeastern United States. 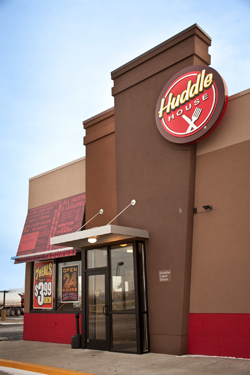 While it does have units in larger metropolitan areas, including Atlanta and Birmingham, the owners saw the benefits of smaller communities early on and have continued that strategy.

Brian Kendrick, director of development, says the company targets communities with around 15,000 residents. They first make sure there are few or no direct competitors in the area, such as IHOP or Waffle House. Huddle House also strives to be the main 24-hour restaurant in town. They look for other 24-hour businesses, such as factories or hospitals, whose workers are likely to frequent an all-day, all-night restaurant. Other considerations are whether the town is a county seat, which is preferable, and is near a major highway, which is critical.

The existence of a local WalMart 24-hour Superstore is an indication that the location is a good opportunity. If WalMart has done its homework and invested time and money, says Kendrick, the venue is a pretty sure thing.

Huddle House has provided a model for free-standing units for its franchisees in the past. Recently, however, there have been conversions of existing restaurants. New units have been opening in travel plazas. The emergence of travel plaza franchises has been a positive development for the brand. These units, which make up 11 percent of the total, cater to travelers and truck drivers, offering brand exposure to customers who wouldn’t necessarily be in one of the small town locations. The travel plazas also fit the 24/7 model.

A free-standing prototype is about 2,300 square feet, with seating for 75 that can expand by 12 to 15 seats. The travel-plaza version starts at 100 seats. The kitchen design is similar for both prototypes, with the exception of increased griddle capacity in some of the travel plaza units. Costs are similar for both, according to Kendrick.

The Huddle House menu is the same in both types of units, freestanding and travel plazas. Breakfast, lunch and dinner are available 24 hours.

The company started a remodeling program two years ago. The remodel freshens up the facility and, in some cases, updates the cook line. Kendrick expects 28 remodels in the 2014 fiscal year