If you live in Detroit and have a yearning for real New York-style pizza, there’s no need to buy an airline ticket and fly eastward. All you have to do is go to Mootz Pizzeria + Bar and order one of their authentic New York pizzas.

Tony Sacco, co-owner of Mootz, calls it “an upscale twist on the classic New York pizzeria and bar.” The menu reflects that idea, featuring such specialties as the Juliet (topped with prosciutto, fig jam and gorgonzola) and the Uptown & the Bronx (with pepperoni, New York pizza sauce and “mootzarella”). A wide range of salads and pastas rounds out the menu.

All the pizzas at Mootz are served on an authentic crust made from an aged dough recipe baked at 700 degrees F until crispy in a Marra Forni pizza oven. In typical New York style, customers on the run can pick up a slice to go at the Side Hustle, a by-the-slice only counter located next door to Mootz. 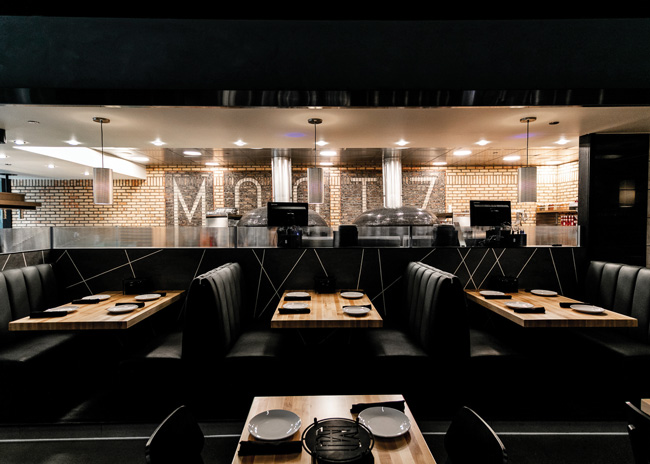 Marra Forni pizza ovens are an anchor of Mootz’s design.

That “upscale New York pizzeria” concept carries through to the decor at Mootz as well. Sacco’s instruction to his designer was to take that New York pizzeria idea and, in his words, “twist it up, make it a little more upscale.” And that’s exactly what Carmine Martone, owner and chief designer of Martone Design Studio in Northville, Mich., did. “We wanted to give the dining room and bar a classic look, almost like a classic bar from the ’50s,” he says. Part of creating that authentic look was using Sacco family photographs, “like a really cool photograph of my grandfather behind the bar,” Sacco says. A large comic-style pizza mural by a local graffiti artist adds a modern touch to the decor.

The open kitchen design helps carry out the Mootz design aesthetic, anchored by two Marra Forni pizza ovens with a dramatic black glass mosaic tile finish. “It’s a very attractive oven,” says Sacco. “The whole kitchen and the whole restaurant are built around those two ovens,” adds Martone. In fact, he says, the ovens were “a starting point and a focal point” of the restaurant’s design. “Everything else is built around it. So, wherever you are in the restaurant, you can see in the kitchen, see the activity and see those ovens.” 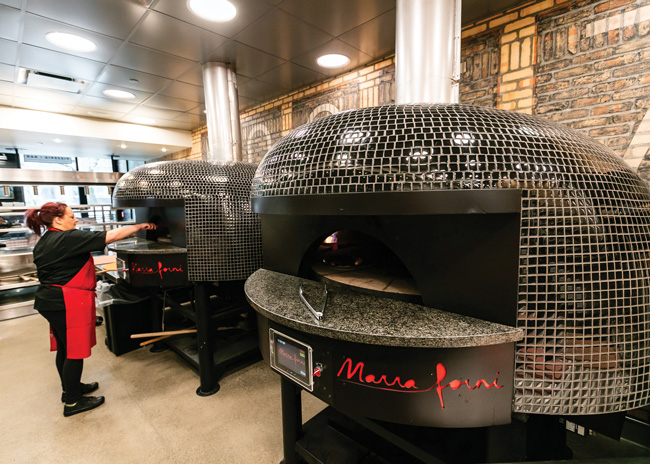 The Marra Forni pizza ovens in action at Mootz Pizzeria.

No matter how attractive the Marra Forni ovens may be, what really counts is how well they can produce Mootz’s pizzas, and Sacco says that they cook his pizzas “very well, very efficiently.” The ovens at Mootz feature a rotating deck to ensure that every pizza bakes up consistently perfect. An easy-to-use digital touch screen controls temperature and rotation. And since Marra Forni ovens are manufactured in the U.S. using core materials from Italy, service support is readily available.

The Marra Forni pizza ovens are an integral part of promoting Mootz’s core aesthetic of “upscale New York pizzeria” while producing perfect pizzas. As Martone says, “When you walk in and see them, it makes you realize it’s the real deal. It’s what the place is about. It’s about the pizza.”