Over the last year, many restaurants, bars, food halls and other dining places have adapted their designs to ensure staff and customers stay safe.

While mask mandates have mostly lifted for vaccinated guests, many changes that happened during the COVID-19 pandemic have become permanent. At the very least, those changes have included the addition of hand sanitizing stations or tableside bottles, and at the highest level, full-scale enhancements to ventilation with the implementation of top-of-the-line air filtration systems. That latter change comes at a significant cost, so many restaurants have instead focused on either expanding outdoor seating and/or creating more flexible, indoor/outdoor spaces. Here’s how some are adapting their designs and operations to create a more comfortable, safe dining environment while still maintaining the integrity of true hospitality and the dining experience. 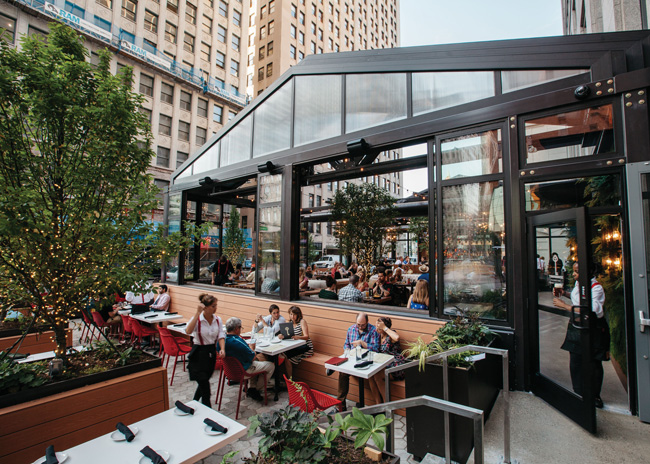 Just as some people are still feeling a little nervous about going maskless while others ripped them off with gusto once the CDC guidelines changed, divisions among diners exist.

“I am seeing two camps of people: those who went out during the pandemic and felt fine about it, and those who still have some post-traumatic stress and are slower to go back to socializing,” says Michelle Bove, founder of DesignCase. “There are folks who are like, it’s over, let’s go back to normal, I want to be in the middle of a packed bar and others who want to keep things simple and quiet and a little more spaced out.” These two poles, Bove adds, have created a boom of fine-dining and fast-casual restaurants, but left a gulf in between. 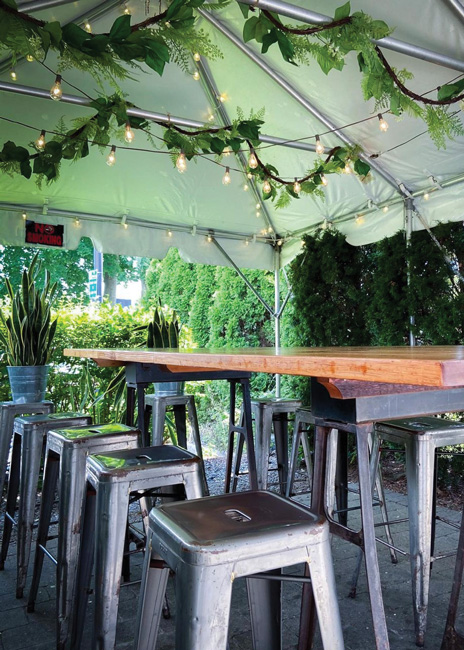 At The Grey Owl Bar & Grill in Rockland, Maine, restaurant consultant Mark Moeller worked with the owners to upgrade the lighting and wattage in the bar, dining room and outdoor patio to enhance and complement all three spaces to work with spaced apart tables. Also, the restaurant removed booths and added additional chairs and tables to be able to remain more flexible and create more two- and four-tops with more space in between as well as one fixed table to seat 10 to 12 people. Moeller also helped another one of his clients, Bodega Taco Bar in Fairfield, Conn., expand outdoor seating from 40 to 88 — a change that has become permanent. Image courtesy of Bodega Taco Bar“Fine-dining restaurants tend to not pack people in like sardines, and there is more breathing room,” says Bove. “For those who are going to risk their health to go out, they want an amazing experience they can’t get anywhere. Fine-dining restaurants can also feel cleaner because you often have different servers and bussers and not the same person handling both clean and dirty dishes. Diners definitely don’t want to see any crossover like that anymore.”

Restaurants are increasingly trying to provide service to patrons that want a little of everything. Yuwen Peng, AIA, LEED AP, BD+C, associate principal at CallisonRTKL, recently worked on Imli, a new Indian restaurant concept in Whittier, Calif., that features a chai tea bar with grab-and-go and small grocery options at the front of the space; a casual cafe with lounge seating and small plates in the middle; and a main, full-service dining room toward the back.

“We divided the 2,500-square-foot space into these three microconcepts so people can sample a little bit of the food here and there. We wanted to give options for those who would rather walk in, pick up what they need and walk out, and for those who are more comfortable with dining indoors,” says Peng, who adds that this setup has also been helpful for introducing different types of Indian food to those who may be less familiar with the cuisine.

Before the pandemic, increasing numbers of chefs started getting involved in the fast-casual segment, launching more casual outposts and smaller spaces with counter-seating. During the pandemic, these takeout-heavy concepts proved vital with indoor dining closed in many markets across the U.S.

“We have been working with more clients who want traditional dining but who also want to expand their takeout options,” says Peng. “During the pandemic, we figured out that we can order amazing food from anywhere, and we don’t want that taken away from us. With a fast-casual or takeout option, restaurants can offer higher-end food at a more affordable price point and add another revenue stream. They can advertise their 10-course tasting menu through their lunch customers or vice versa.”

From a safety perspective, this gives customers the option of either dining indoors or out and being able to enjoy the same quality food. But proper design is still imperative. “We now have to think of takeout or customer pickup as its own experience, and it has to be separate from the main operation,” Peng says. This can be in the form of a separate entrance or side door used exclusively for takeout orders to prevent bottlenecks and excess congregating. Another option is to open up sections of a front bar for takeout, or build a window in the side of the building that’s close to the central kitchen. Just piling up takeout boxes along a counter or near a window doesn’t cut it either.

“Everything has to have a home, and whatever the customer sees has to have meaning; we can’t have multiple boxes strewn about during peak hours where everything looks like a mess,” Peng says.

Roomy seating is the new name of the game. During the pandemic when some indoor dining was allowed, many places mandated that tables had to be spaced 6 feet apart. There might not be 6 feet of spacing anymore but there is still more spacing than in the past.

“One of the discussions we have been having is how to maintain some separation but without having open floor space because that looks weird, too,” says Bove, who has used tall plants, bookcases and other subtle dividers. “This creates that intimate experience with each table having its own microclimate,” she says. 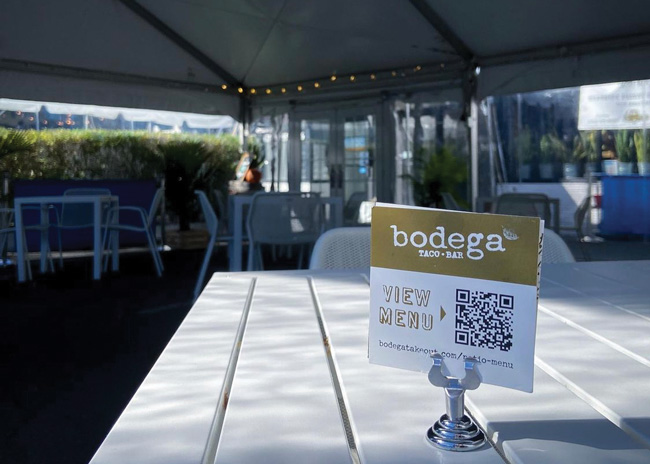 Image courtesy of Bodega Taco BarOf course, most restaurants have moved away from permanent menus and switched to single-use or QR codes that customers can scan with their phones to bring up menus. “I also do see restaurants continuing to minimize the amount of time a server spends with you,” Bove says.

These natural partitions have had another benefit: they help with noise control because more material absorbs more sounds. “I think we’ll see restaurants becoming quieter as a result of this,” says Bove. Another added comfort for anxious diners.

And while those makeshift plexiglass partitions put up between booths may be coming down, some glass separations might continue, if at the back of the house or near other kitchen areas. “People will still want to see their food being made, but we might see kitchens or staff behind glass,” says Bove. “Something we have done before is put a pasta-making room behind a wall of glass so customers see it when they walk in, but there isn’t any air exchange.”

Even restrooms of the future will likely see more separation. “We were seeing more individual restrooms with everything inside an enclosed area before the pandemic, but I think that will continue,” Peng says. “This is the way to make people feel safe and create a more personalized sense of space.” She also sees a decline in total restroom footprint in order to make more room for spaced out dining. 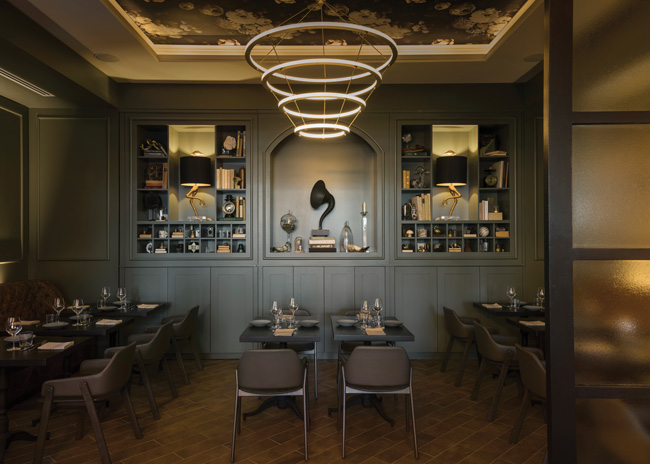 At Henley in Nashville, at press time, dining tables and bar seats still had a bit of extra space between them, and outdoor seating had been extended for all meal periods. Additionally, says Stephanie Bloink Adams, general manager, hand sanitizer is available for guests at the host stand and for staff in multiple places behind the scenes. Single-use check presenters are now used, and all tables are kept clear until guests are seated, with table sanitization between guests. Image courtesy of Henley

Both Peng and Bove see a continuation of the outdoor dining that flourished during the pandemic. “People love it — and towns and areas that were more car-centric have become more pedestrian-friendly as a result of those streetscapes that were created,” says Peng.

Many of these restaurants have made their semi-permanent or makeshift outdoor areas into permanent structures. 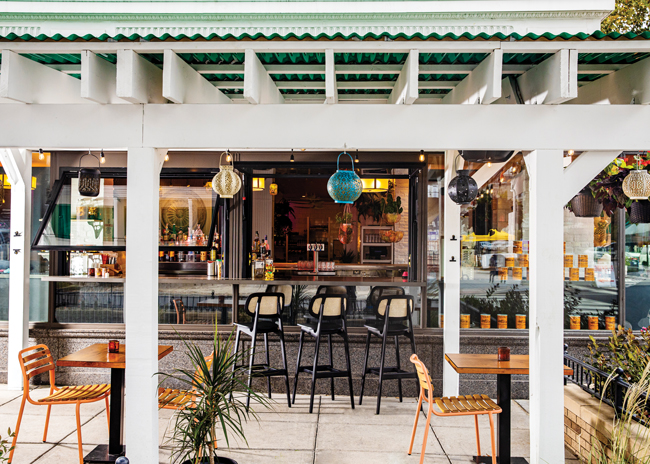 “During the pandemic, everyone’s thresholds for pain — whether for heat or cold — were definitely stretched,” Bove says. “I think a lot of people have found a new love for fresh air and dining outside as much as they can.”

Many restaurants have also invested in retractable roofs and doors that can open to let in breezes and bring the outdoors in a little more. “Last year, we designed a project where we had an awning-type window that flips up at the bar so you could be sitting on the patio but look across to people sitting inside, and that was very successful,” says Bove.

The only trepidation with these indoor/outdoor spaces, Bove says, is that they are not always great environmentally. “You don’t want to be air-conditioning the entire neighborhood, because that’s not sustainable and uses extra energy,” she says. “But, on milder days, you could use ceiling fans to carry breezes throughout a space without just pumping hot or cold air.” The other option is to build a sunroom that’s enclosed during the colder months but can open as a patio during warmer seasons.

Even food halls and shopping malls with restaurant spaces are getting into the greenery game as an extra level of comfort for guests. Peng points out the new Hyundai department store in Seoul. Instead of cramped aisles with lots of merchandise, 50% of the indoor space has been filled with mini gardens and greenery, waterfalls and open space with pop-up food stations and scattered seating. “I definitely see more restaurants bringing the outdoors in a little more,” she says. 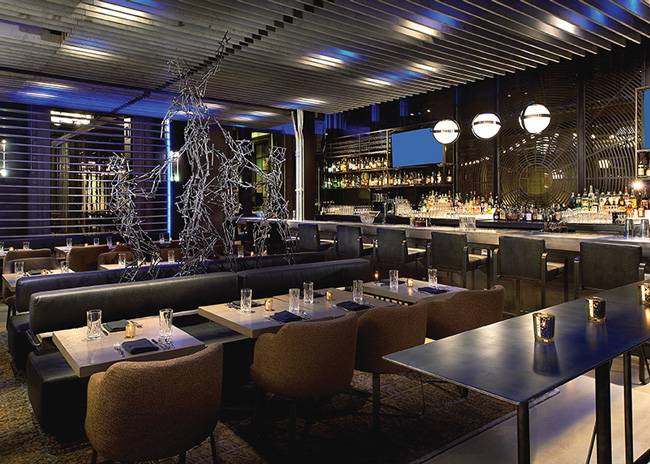 The team at Dirty Habit DC at the Kimpton Hotel Monaco in Washington, D.C., no longer have tables spaced 6 feet apart, but they have more space in between them than before, says Robert Micheli, general manager. Operationally, there are reduced walk-ins and the restaurant maintains a more structured reservation policy to keep congregating and standing crowds to a bare minimum. Hand sanitizing stations are now at all entrances. The team also reconfigured couches to provide more sections for small groups to sit by themselves. Planters were also added to dampen what was previously a shoulder-to-shoulder atmosphere. 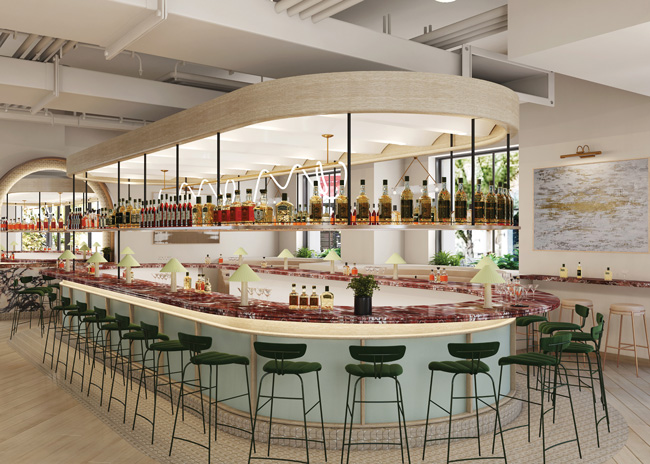 Jeremy Sasson, founder of Heirloom Hospitality, which operates Townhouse Detroit, implemented several changes during the pandemic to make guests feel at ease while still delivering a hospitable experience. For the remodel, the team moved the principal dining space to what was just an outdoor-only patio, implementing a retractable roof to create a more indoor/outdoor feel and to shield against inclement weather. In addition, tables were moved around and half-moon rounded booths were added to offer more privatized, personalized spaces for smaller groups. The new seating features a blend of private/quiet space, semi-private and open seating to accommodate diverse guest desires for more privacy versus high-energy. Sanitizing stations and tabletop sanitizing bottles have become permanent fixtures but branded with the restaurant’s logo.