This Miami eatery uses thoughtful design to emphasize the craftsmanship of its food. 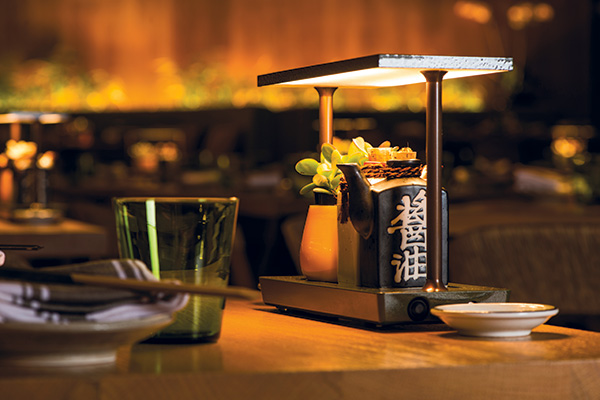 Sushi Garage worked with its vendor to develop custom-made, rechargeable LED table lamps that are designed to hold soy sauce and a potted herb.In 2013, the James Beard Award for Best Restaurant Design: 76 Seats and Over went to Juvia. Located on the top floor of a building in Miami Beach, the restaurant features an eclectic menu, ultra-modern design and sweeping views of the city.

While Juvia’s menu features adventurous fare, Sushi Garage focuses on traditional Japanese cooking that showcases sushi’s craftsmanship. And while Juvia has an eye-popping modern look, Sushi Garage has a warm yet hip design intended to match the menu, says Barrios. “Sushi is a type of food that is made with your hands. It’s a very crafty process. So from day one, we knew we wanted to use materials that transmit that feeling, that this is a handmade place just as the food is,” he says. 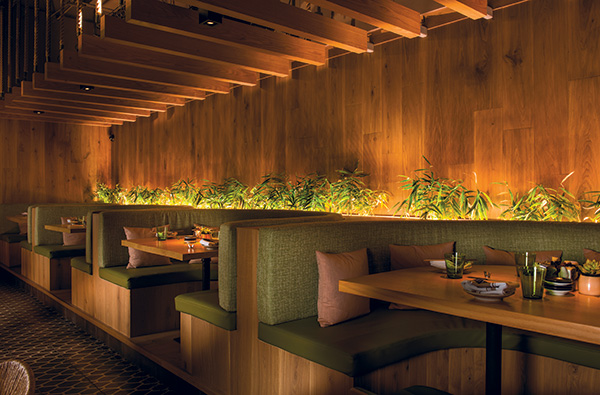 The booths and wall paneling are made of oak wood, while plants along the wall add color and nature inside the restaurant.Sushi Garage is part of the up-and-coming Miami neighborhood of Sunset Harbor. Up until a few years ago, the area was very blue-collar, filled with warehouses, storage units and, not surprisingly, auto mechanics. Sushi Garage’s space, in fact, was a repair shop before the project team parked a restaurant there. “The first time we saw it, there were even platforms to lift up the cars,” Millán recalls.

Not only did the building’s previous tenant influence the restaurant’s name, it also impacted the design. Most obvious is the garage bay door, which Barrios chose to keep in place. Instead of using the door’s metal panels, though, he swapped in glass panels with aluminum frames. Controlled by an automatic opener, staff raises the door on nights when the weather allows it. The storefront also consists of a glass door and floor-to-ceiling windows, giving Sushi Garage a very strong presence from the street.

For both passersby and customers, there’s no one design element that intrusively demands attention; an over-the-top design choice would run against the theme of craftsmanship. Similarly, the restaurant uses a simple and warm color palette with different shades of gray, off-white and green. Diners also see plenty of natural oak, which is visible on the tables, chairs, booths and wall paneling.

Walking into the operation, customers see a sushi bar along the back wall, a bar serving alcohol to the left, booths (elevated one step) to the right, and table seating — mostly two- and four-tops — in the center of the room and running up against the front windows. 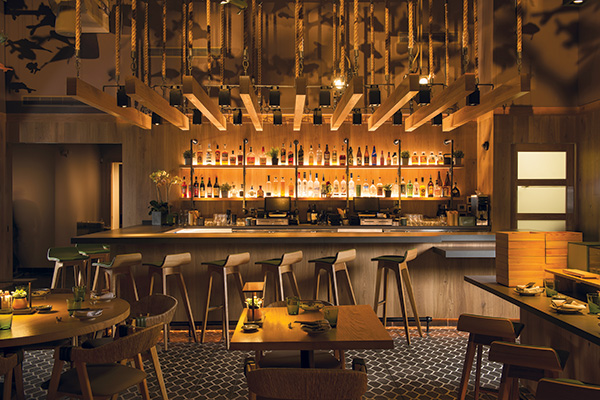 The bar’s shelving installation consists of oak planks held in place by water pipes. Wooden beams overhead add intimacy to the space.If Sushi Garage has a signature design touch, though, diners won’t find it to the left, right or middle. Instead, they’ll have to look up. There, they’ll find nearly 200 metal koi sculptures,
in greens and guava, suspended from the ceiling.

According to Barrios, the fish fill a practical need. The Sushi Garage space has 16-foot ceilings — another remnant of the days when it was an actual garage. That was simply too much empty space overhead. The fish help bring the room to a more familiar scale while also emphasizing the style of cuisine.

Originally, notes Millán, the design team thought of suspending origami fish from the ceiling. A few phone calls, though, revealed that it would take a master origamist four days to fold a single fish. Multiply that by 200, and it would have been impossible to pull off, to say nothing of getting approval from the fire marshal to hang hundreds of pieces of paper from the ceiling. The design team eventually chose a metal sculptor from Venezuela to handle the project. 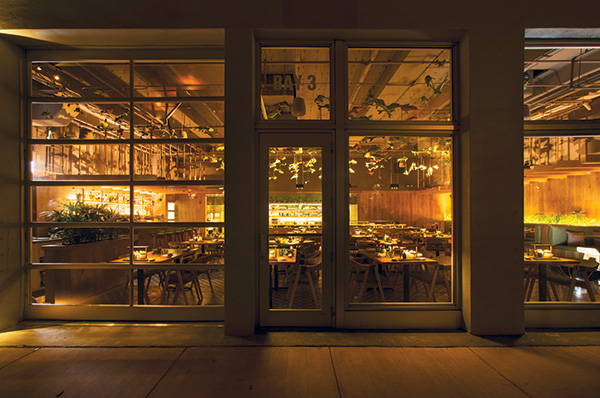 With floor-to-ceiling windows, including windows on a garage bay door, Sushi Garage makes a strong impression on passersby.While the fish are naturally eye-catching, the installation is made even more impressive by how it’s lit. To enclose the space, the designers used wooden beams that hang over the bar and the booth seating. They then attached spotlights to the top of the beams and pointed them at the fish. The fish and their shadows, along with their slight HVAC-induced swaying, give guests the impression that they’re “looking up from the bottom of a fishbowl,” Barrios says.

While the fish are impressive, just as much thought and care went into other, more understated design elements.

Start with the table lamps. The operation relies on these lamps instead of overhead chandeliers or light fixtures. Those would make the space feel much too formal, says Millán.

Rather than going with an off-the-shelf lamp, Millán wanted something that was functional (holding soy sauce, dipping dishes and a potted herb) and that looked and felt handmade. Working with their vendor, the design team developed a rechargeable LED unit with a base, two pillars and the LEDs on top. 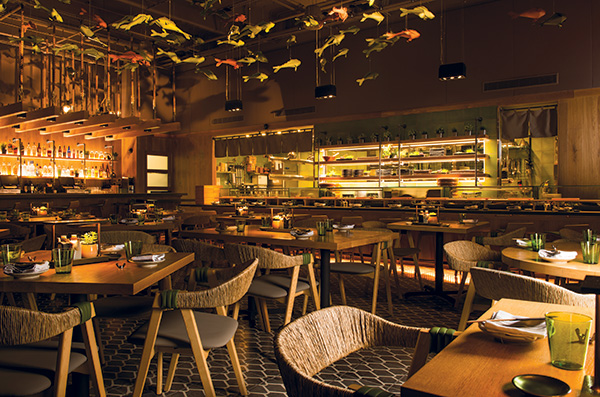 While the chairs are from a factory, their wicker backs and leather-strapped armrests make them feel handmade.The flooring was another custom order. Barrios and their tile vendor designed a gray, Cuban-style custom cement tile with geometric shapes that look like the scales of a fish.

While the tile and other custom touches like the lamps came with significant costs, they were worth the money, says Millán. “We tried to avoid the custom-made because of course it’s more expensive, but I believe in the whole process, there are certain pieces you have to give in for. There are certain elements that are going to make a bigger difference in the final product, things you couldn’t achieve with an off-the-shelf solution.”

One piece that looks custom but is actually manufactured is the chair specified for the two- and four-top tables. This was actually one of the first design elements selected for the restaurant. “It is a work of art,” says Barrios. “I always ask this question: If this restaurant was a chair, what chair would it be.” Indeed, the chair communicates a lot about the operation. It has two skinny legs, which are reminiscent of chopsticks. Wicker covers the chairback, while the arms have straps made of leather — materials that convey the idea of handmade.

The stools at the bar have a similar look, with long, chopstick-like legs and green seats. The oak-clad bar features a porcelain top. Behind the bar, Barrios developed a creative liquor display: oak shelves framed by metal water pipes, emphasizing the idea of the work that takes place in the restaurant.

Guests will find some of the same design elements at the sushi bar, where they can enjoy their meal while watching trained chefs assemble rolls and nigiri. This space uses the same stools as the bar where alcohol is served and has similar shelving, namely oak shelves suspended by plumbing pipes. These shelves hold plates as well as potted herbs. According to Barrios, sushi chefs will actually pick and use these herbs in the course of their work, showcasing to customers the craftsmanship behind the food. While that alone is a fun, thoughtful touch, there’s much more going on in this area.

According to Barrios, the operators wanted to locate the production kitchen, where staff prepares hot menu items like fried rice, chicken teriyaki and miso maple sea bass, in the immediate vicinity of the sushi bar. In addition, they wanted a display kitchen to impart life and energy to the operation.

These two goals, notes Barrios, seemed to conflict. “The open kitchen generates a lot of heat. The heat is not friends with the sushi. You need a partition. For that partition, we didn’t want a solid wall. So how do you have the best of both worlds? You make an opening for a window.”

This isn’t just a pass-thru, however. To properly insulate the sushi from the hot kitchen, the designers placed a pane of glass in the opening, creating an actual window. Having fire against glass adds extra flair to the design. It also, adds Barrios, creates a cleaning challenge, with bits of grease dirtying the window during practically every shift. The operators anticipated this, however, and have committed to cleaning the window at least once per day.

While the placement of the open kitchen presented a design challenge, simply building a kitchen in this facility was also a hurdle.

Typically, a kitchen’s mechanical, electrical and plumbing (MEP) run beneath the building’s concrete slab. Structurally, though, the building couldn’t handle having its slab cut open. The design team figured out an MEP plan that could work with less than two inches of space. Barrios had the contractors pour an extra two inches of concrete flooring in the kitchen to handle the MEP.

Other big challenges came from the use of custom design elements, like the floor tile and table lamps. While custom products contribute greatly to Sushi Garage, they also required a lot of effort and carried some unavoidable risk.

The project timeline, for instance, didn’t allow the design team to have a final prototype of the table lamps before they were ordered. Instead, they relied on video conference calls and samples of material shipped overnight. While Millán was happy with the end product, this part of the project could have turned out very differently.

The fish scale tiles presented another challenge: When the final product shipped to the jobsite, the construction team found that the tiles had been destroyed in transit. A new set had to be made from scratch and took several weeks to arrive, complicating the construction schedule, says Barrios.

In the end, though, the design team was able to overcome issues surrounding the facility’s build-out and the design elements they specified. The result is a truly beautiful operation in which the design emphasizes the quality of work performed in the kitchen.

“You need to feel the craftsmanship in the restaurant,” Millán says. “We wanted everything that you touch, that’s in the reach of the client, to feel that it was crafted like Japanese food. Japanese food, it’s just the product and the craftsmanship — the way you cut the fish, the way you cook it...We wanted to transmit that feeling through the design.” +

Right: Sushi Garage worked with its vendor to develop custom-made, rechargeable LED table lamps that are designed to hold soy sauce and a potted herb.

Below: The booths and wall paneling are made of oak wood, while plants along the wall add color and nature inside the restaurant.