Cooking with fire is, of course, the most basic of all cooking types, dating back to our cavemen ancestors using only the elements of fire — flame and smoke — to cook their meals. Chefs who like cooking with live fire tend to be quietly obsessed with it, and right now this fixation is taking over England’s capital city.

Here’s a look at three restaurants in London where fire-cooked food is the main attraction.

In 2018, the first Parrillan opened at Coal Drop Yards, just behind King’s Cross Station, featuring small grills that were delivered to customers’ tables so they could grill their own food. But the concept of live fire cooking has evolved at Parrillan between the opening of the company’s first and second restaurants. 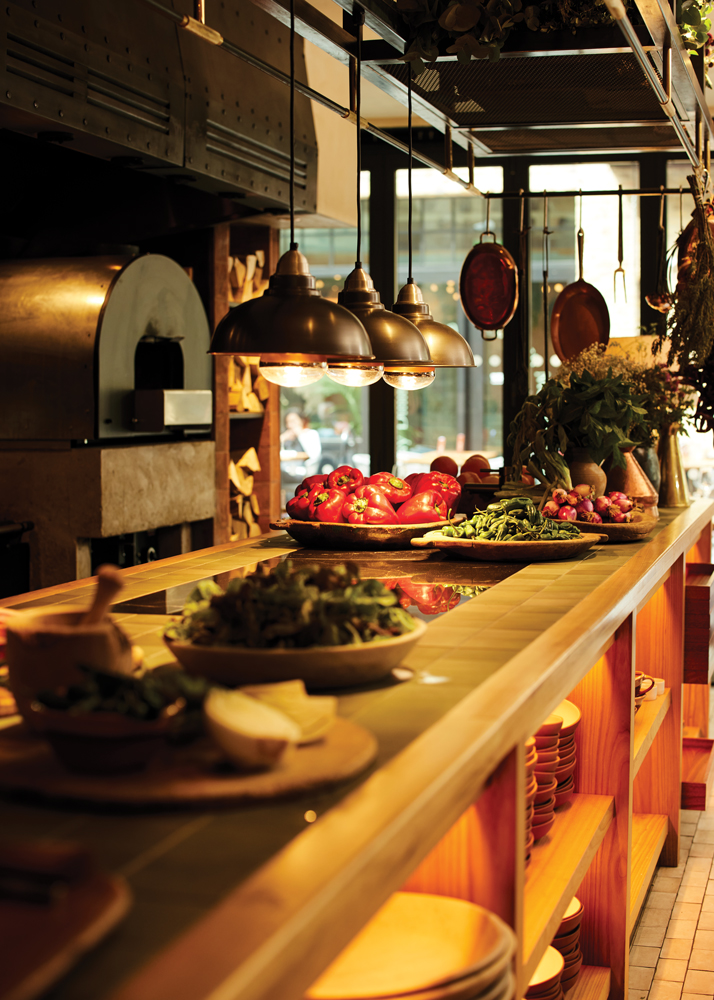 Between 90% and 95% of the food at Parrillan is touched by fire — even some desserts like lemon meringue pie. Images courtesy of John CareyIn spring 2022, when the brand’s second location opened in Borough Yards, just south of the Thames, it still had the wee grills, but also featured an open kitchen with an open flame grill. This kitchen design was carefully considered, says Chief Design Officer James Hart. “People feel like they’re in someone’s home, and it was about a sense of hospitality and warmth and engagement and breaking down the barriers between the front of house and the back of house,” he says.

In the open kitchen, there are three visible cooking areas: On the left is a big closed oven to prep the charcoal, in the middle is the open flame grill, and to the right is a wood-fired grill about 8 feet wide, and a wood-fired stove and a pizza oven.

The grilling area has a lot of vertical space with three platforms that can be lowered or raised using a wheel. Steaks and vegetables can be cooked low, directly in the flames, then moved up to rest area.

“It’s pretty versatile, but it requires a lot of skill because you’re constantly juggling the heat of the fire so the chef needs to maintain that, and have a feel for the fire and a feel for the piece of meat or fish,” says Hart. “It requires more skill than some other forms of cooking. The flavors can be incredible but it’s difficult to do it, so it doesn’t just taste of smoke.”

Six employees work in the cooking area with one of them controlling the fire in the grill. “If you’re on that piece of equipment you’re in charge of the fire,” Hart notes.

Between 90% and 95% of the food at Parrillan is touched by fire — even some desserts like lemon meringue pie. There is a back-of-house area not visible to guests, but it’s mostly used to do prep work, salads and desserts.

Hart designed Parrillan Borough Yards to be warm and was inspired by Mallorca, an island off the coast of Spain. Inside, the floors are a mixture of ceramic, brick and cement and the walls are limewashed clay. Hart wanted the restaurant to feel soft and tactile, he says, and used sustainably sourced British leather for the chairs, stools and banquette seating pads in warm, earthy tones that were appropriate for a live fire restaurant.

Decoration is almost exclusively linked to the cooking. “The walls are basically a canvas to hang things on with rails with bunches of rosemary, onions, old copper pans,” says Hart, “and we replace the fresh items weekly.” There’s very little artwork but he did commission some and wanted it to feature key phrases about cooking and food, focusing on live fire and the provenance of the produce. “Everything is based around that,” he says. 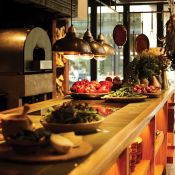 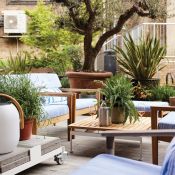 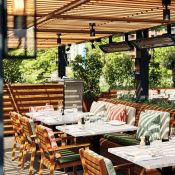 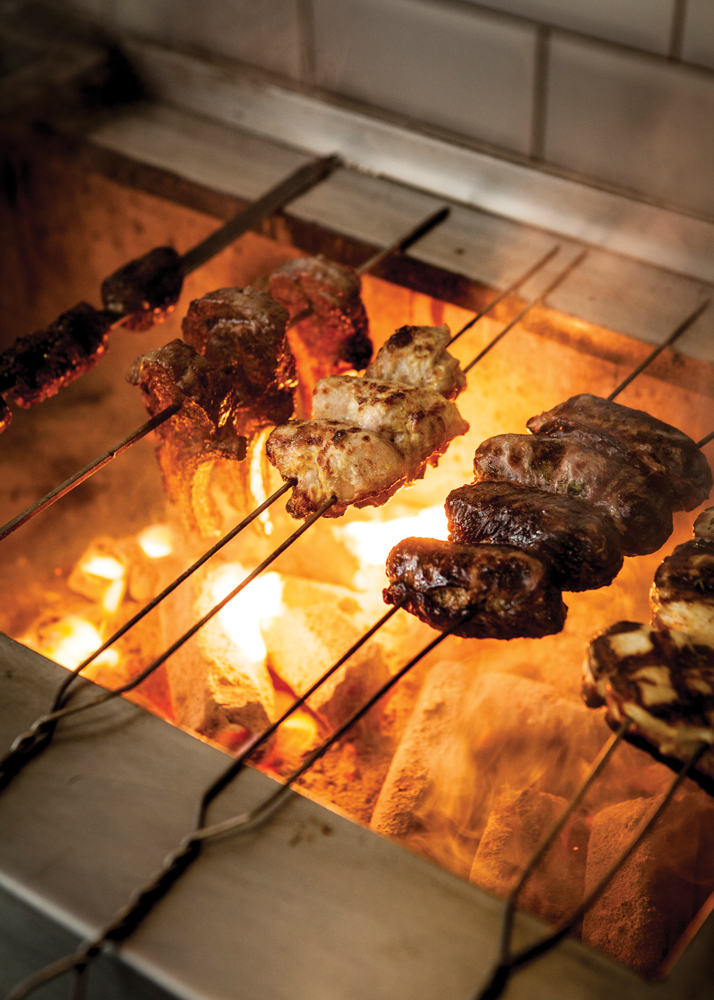 “I’ve always had quite an obsession over cooking with fire; everything tastes better,” says Kiazim, who’s also the chef. After her classic French training, she looked back to her Turkish-Cypriot roots and realized there was a gap in the London market for that type of food.

At least 50% of Oklava’s food is touched by fire. Some desserts even go through the fire for finishing, and even breadcrumbs are often given extra flavor via flames.

The fire at Oklava is in an open kitchen, and it was important to Kiazim that it be very versatile, able to cook food on skewers, able to slow cook, rotisserie and grill. The grill is about 3 feet wide, half that in depth, and is operated by a single employee per shift. “It’s not very big and that’s quite awkward because that’s the cooking space, and you have a very small space the size of a small chopping board at one side, for preparing meats and things. And to your right is where we have another chopping board for cooked meats,” she explains.

Underneath the grill Kiazim stores her charcoal; and directly to the right is an induction stove with a refrigerator underneath containing proteins. Opposite that, behind the chef, is another under-counter refrigerator for storing vegetables.

Kiazim’s favorite way to cook is to have low coals that burn very high to impart flavor and caramelize food at the same time, although sometimes she creates very high flames for a quick sear on meats or fish skin. At least 50% of Oklava’s food is touched by fire. Some desserts even go through the fire for finishing, and even breadcrumbs are often given extra flavor via flames. Images courtesy of Steve Ryan

The grill burns mostly with coal but also a log, which smolders constantly to impart gentle smoke. Charcoal, she says, is traditional in Turkish cooking and it provides a more sustainable heat. She likes the flavor profile of the mixture of charcoal and wood, she says, and using wood alone isn’t feasible. “You have to burn a significant amount of wood and the space of the grill wouldn’t allow it.” The grill has two shelves above it so Kiazim can cook multiple foods at the same time, though she tends not to use the first shelf as it encroaches too much on cooking directly in the flames. She might have 4 to 6 inches over a mellow fire, fish on a rack above that and at the same time be smoking vegetables like eggplant at the top, or resting cooked meats. She also puts items like crispy onion rings or lavash bread on that top shelf “so you get all that lovely smoke, and it imparts a whole other layer of flavor,” she says. The higher shelves are also great for holding anything that’s caught on fire, she adds.

Of course, safety is a key consideration when you’re cooking over an open flame, so Oklava has a top-notch extraction fan that covers the entire cooking area, plus some overhang over the cooking line, with a second extraction fan over a nearby stone oven.

Stools run around the bar at the open kitchen, so any diners sitting there get a great view of the fire.

The restaurant faces into a yard that is flanked by two four-story buildings. Nearby is a brewery, 40FT, which Ryan has operated since 2015, a bakery and a wine bar.

Acme’s kitchen and dining room is outside, though the bar is inside. The first thing Ryan did was unify the restaurant and brewery with wooden decking to bring them together. But, at the same time, he wanted to keep them separate, with a dividing line of trees in planters. Beer lines run under the decking from the brewery to Acme, so many of the same beers can be served, “which saved us building a cold room for Acme,” Ryan points out.

At Acme, a polycarbonate roof stretches over the kitchen and dining area, left from the previous tenants. “We’re working with what we have and improving organically, like adding nicer, more sturdy tables outside,” says Ryan. Acme’s fire uses around 30% charcoal, 70% wood. The restaurant tends to use charcoal during the day to keep the smoke down. Images courtesy of Dan Wattans and Steve Ryan

To ready the space for the winter, there are heat lamps over each table, and the entire outside area is wrapped in weatherproof walls — made from thick sailboat material, which zips together and has windows. This can be rolled up and down based on the weather. Sheepskins and blankets are on all chairs.

The fire is located to the right of the space, and at 3 to 4 meters wide by 1 meter deep, it is the largest size Ryan could source. Three shelves sit above the grill and chefs cook directly on the fire and above it, too, with meats often hanging from the top rack. The entire grill is on wheels so it can easily be moved.

Acme’s fire uses around 30% charcoal, 70% wood. The restaurant tends to use charcoal during the day to keep the smoke down. The smoke disperses pretty easily, Ryan points out, so there’s no need for a hood.