Prohibition spawned the speakeasy concept: an illicit place for citizens to purchase and drink alcohol in America. Also known as a blind pig or a blind tiger, these ad hoc saloons were hidden in basements and back rooms, accessible via secret passwords and concealed entrances. Advertising was strictly word of mouth. Speakeasy popularity faded with the repeal of prohibition in 1933.

Speakeasies came back into fashion at the beginning of this century. In these intimate saloons, the emphasis was on the allure of exclusivity, swanky decor and well-prepared cocktails. Iconic pioneers included Milk & Honey, with an unmarked door and unlisted phone number; and PDT (Please Don’t Tell) where patrons entered the lounge via a phone booth in the rear of a hot dog shack. The speakeasy vibe proliferated across the country, with The Violet Hour in Chicago and Bourbon & Branch in San Francisco, to name just a few.

Today a new wave of speakeasies is rising. They’ve ditched the Gatsby glam in favor of emphasizing distinctive decor schemes — but have retained those hush-hush entrances. Do tell!

Here Kitty Kitty Vice Den, an exclusive hideaway heavily influenced by traditional Chinese art and aesthetics, is tucked into a food hall in Resorts World Las Vegas. Guests who gain entry to the intimate speakeasy are treated to a taste of high-roller privilege.

Resorts World, the newest contender on the Strip, owned by Malaysia-based Genting Group, is a 59-story tower comprising a 3,500-room hotel complex with more than 40 eating and drinking establishments.

“We wanted to create a day-to-night experience for Famous Foods, so adding the hidden Here Kitty Kitty speakeasy was an organic component to the overall experience,” says Vincent Celano, founder and CEO. 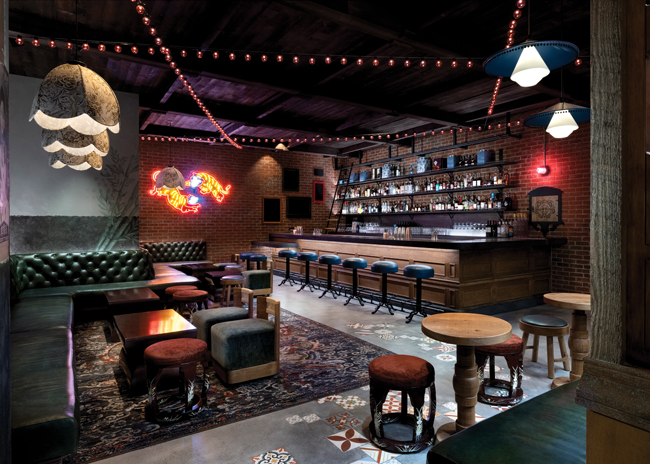 The speakeasy is tucked inside Ms. Meow’s Mamak Stall, a retail shop in the food hall. A password is required when prospective guests check in at the mamak stall counter. The entrance is concealed behind a moveable display wall of Lucky Cat figurines, beckoning with waving paws. Here Kitty Kitty Vice Den is an elegant and intimate 800-square-foot speakeasy that seats 50.

“We layered design features like an industrial bar, wooden rafters and brick walls with cultural Chinese elements to create a rich atmosphere with eclectic and authentic touches,” says Celano.

Those include a mix of advertisements on the wall, a tiger wall mural that is paired with a children’s poem written in Mandarin called “Two Tigers,” a wallcovering and glazed tiles incorporated into a large wood bookcase; hand-painted ottomans, and fabric pendant lights. “With Here Kitty Kitty Vice Den, the materials, lighting, wall art and murals really helped bring the space to life and give it an authentic vintage feel with a slight modern edge and polish,” Celano adds.

“Because we did the graphics and branding for Here Kitty Kitty Vice Den as well as the interior design, it allowed us to help push the narrative and tell the story that then influenced the decor, lighting, design and more,” notes Celano. The design team worked directly with the operations team to make sure that the branding worked for Resorts World and what they had envisioned for the space.

“I think that speakeasy concepts appeal to consumers because it’s a curated experience on a more intimate scale so everyone can feel like a VIP,” observes Celano.

Blind Barber first set up shop in New York’s East Village in 2010, with two barber chairs and a secret bar tucked away in back. Today the company boasts six locations: two in New York, two in Los Angeles, one in Chicago and the newest shop recently opened in Philadelphia.

Uninitiated customers looking for a bar may be puzzled when they first walk into a Blind Barber. “The biggest piece of the speakeasy puzzle is to do your very best to make that first entrance as undetectable as possible,” says Jeffrey Laub, chief creative and marketing officer. “So, we make sure that each barber shop has a very plain white door (that looks like it goes to a closet) as our entrance.”

These barbershops aren’t just a blind for the speakeasy in back. Professional barbers offer full-service styling and customers get a complimentary drink with their shave and a haircut. Those in the know, however, can just pass through the unmarked door into a cocktail lounge.

Although the setups vary from location to location, the spaces run roughly 2,500 to 3,000 square feet and accommodate about 120 patrons. “Each space is unique and has its own charms as well,” says Laub.

The working barber shops sport sharp, clean white hexagonal tiles. Black antique barber chairs stand in front of a distressed backdrop of mirrors topped off with the classic spinning barber pole, according to Laub. In some locations, plants and greenery are part of the ambience. In general, Blind Barber aims to create shops that fit in with the local community.

As for the bar side of the business: “Bringing you back to Boogie Nights!” is how Laub describes the speakeasies’ atmosphere. The lounge spaces are softly lit with 1970s-inspired decor. Rich wood paneling pairs with deep reds, oranges and yellows to help create some sizzle. Scattered throughout the space are cozy little hideaways where guests can slip away and sip on cocktails and enjoy pizzas, sandwiches and finger foods — depending on the location.

The biggest challenge to the dual concept is fitting two ideas into one box, says Laub. “We always make it work but need to make sure that we cover the bases for both the bar and barber shop equally as they are both top notch and deserve their shine.”

The company also sells its Blind Barber grooming products in the barbershops and online. Its staff helped create the products using natural drinks ingredients like hops and juniper berries.

Despite the hidden entrance, Laub emphasizes that they don’t overdo the secrecy aspect of a speakeasy. It’s an open secret. Those in the know, know; newcomers get hints from the barbers about how to get in on the fun. “Once inside the lounge, guests can find great tunes, expertly made cocktails, tasty grilled cheese bites and amazing people (both staff and customers alike).” 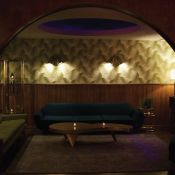 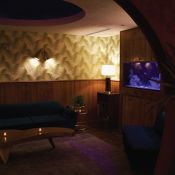 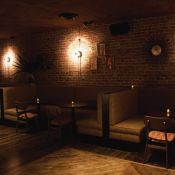 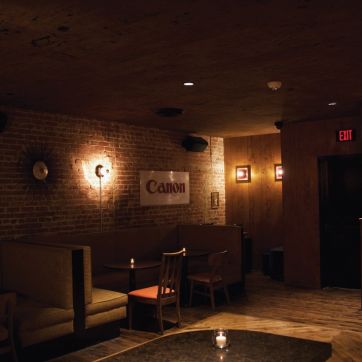 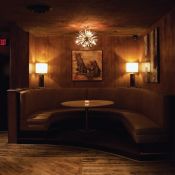 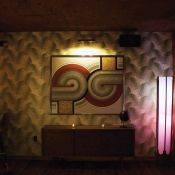 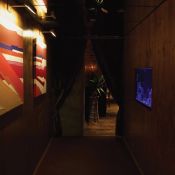 The first speakeasy concept from Chef José Andrés and his ThinkFoodGroup is a pig-centric concept throughout its menu, drinks list — and decor.

“I absolutely love the speakeasy bar scene in Chicago, so when I saw the lower-level space at Jaleo, I knew we could create something really special there,” said Andrés when he announced the opening of Pigtail in October 2021. The new bar is tucked away underneath the River North restaurant, the company’s fifth Jaleo, which opened in July.

The basement speakeasy derives its name from the conflation of pig and cocktail because it specializes in jamón, dry cured Spanish ham, which appears in many small plates and even several cocktails. And like the menu, the playful design and decor has pigs as its focus, but there’s also a speakeasy vibe from the hidden entranceway.

“As diners move through Jaleo, they’ll find a secret stairwell that leads to Pigtail, evoking that speakeasy theme,” says Juli Capella, co-founder of Capella Garcia Arquitectura, the Barcelona-based firm that designed Pigtail as well as many of ThinkFoodGroup’s restaurants. “When creating Pigtail’s design, we looked at classic cocktail bars and we focused on speakeasies, both in the U.S. and Europe.” 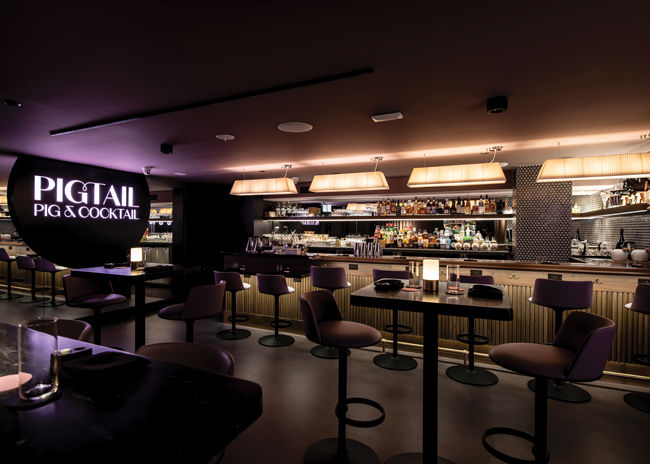 “The pig is a great Spanish icon and has become a recurring symbol portrayed through various artistic perspectives in Pigtail,” says Capella. Porcine details include curls of pink neon mimicking pigtails and flying pigs on the mirrors.

“We didn’t use an excessive color palette, but rather shades of black and pink, which in their combination create a very comfortable, violet atmosphere,” notes Capella. Those colors evoke iconic pink pigs as well as Spain’s black-haired Iberian pigs. “There is also a touch of glamour, like the pink velvet curtains.”

The atmospheric and intimate space seats about 30 guests. “Pigtail is a harmonious environment of soft and sensual lights, with comfortable sofas and armchairs,” says Capella. The Spanish company, Sancal, designed the chairs and barstools and their pink upholstery gives unity and warmth to the space.