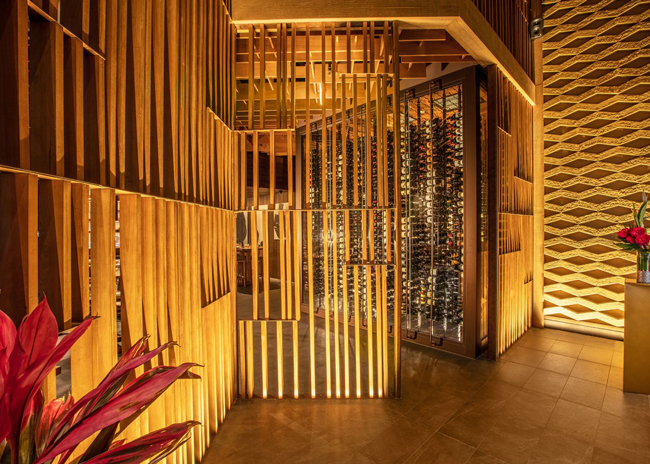 Based in Lima, Peru, Osaka Nikkei, is a Japanese-Peruvian fusion concept with locations across Latin America. The chain recently opened its first location in the United States, in Miami, which was designed by Melissa Herrera, principal of Costa + Herrera Architecture, also of Lima.

The goal of the design was to create a warm space that helps balance out its simple brown and tan color palette, says Herrera. “You won’t see anything painted or flat. They’re very warm materials because they’re all natural.”

Like the food, the restaurant’s design blends inspirations from Peru with Japan, starting with the entryway.

The restaurant’s footprint is somewhat awkward, says Herrera, due to it being a combination of what was previously two separate retail spaces. To orient the operation in a way that made the best use of its square footage, Herrera placed a Japanese-inspired wooden screen at the entry, directing guests to the host stand on the right. Behind the stand is one of two feature walls with adobe clay elements. 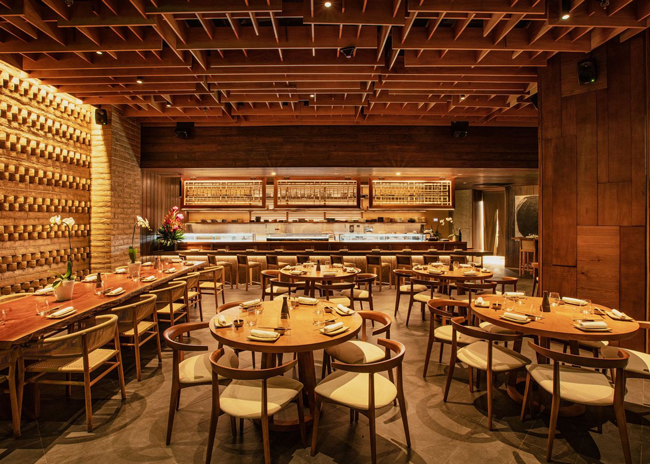 “Peru along the coast has a very long and thin desert, so most traditional architecture along the coast is made out of clay. That’s why we have these two important walls. One is at the reception and has this zig zag-shaped pattern behind the reception desk,” she says. “It creates a very special entry experience because you go through this beautiful space with the adobe wall, then the wine storage and then the dining salon.”

To the left of the host stand is a large wine storage display, which leads guests into Osaka Nikkei’s main dining area. 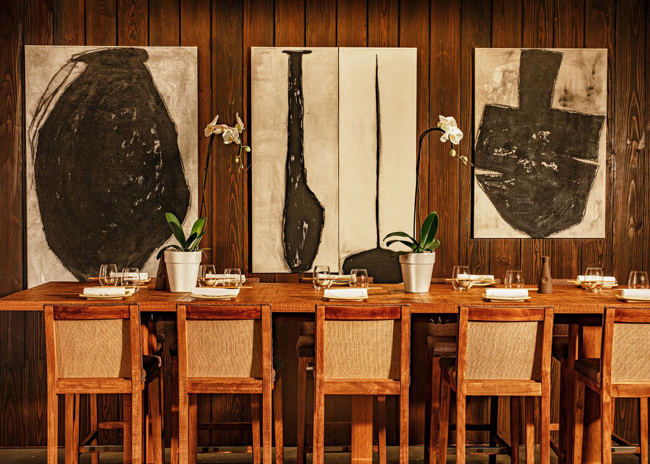 One of the challenges of this space was the presence of a large structural pillar. The designers ended up cladding this in pieces of wood. At different sizes with different finishes, these contribute to the natural feel of the restaurant.

More wood is seen above. There, the dining room’s ceiling has intersecting wood planks of different lengths and set at different heights. This, Herrera says, nods to traditions of Japanese carpentry.

For seating, the dining area is filled primarily with round tables meant to enhance the communal aspects of the restaurant’s offerings. “It’s seating for six and it really makes sharing easier, because there’s a lot of sharing in the menu,” says Herrera.

Osaka Nikkei does have two larger rectangular tables designed for larger parties. Both are paired with chairs with woven elements, a theme of the design nodding to craftsmanship, along with special wall features. One sits next to the second adobe wall, while the other is located near the dining room entrance and is accompanied by three large paintings.

“In these paintings the artist abstracted antique Peruvian objects into a form. It worked really well in the space. It feels rustic and natural,” Herrera says. 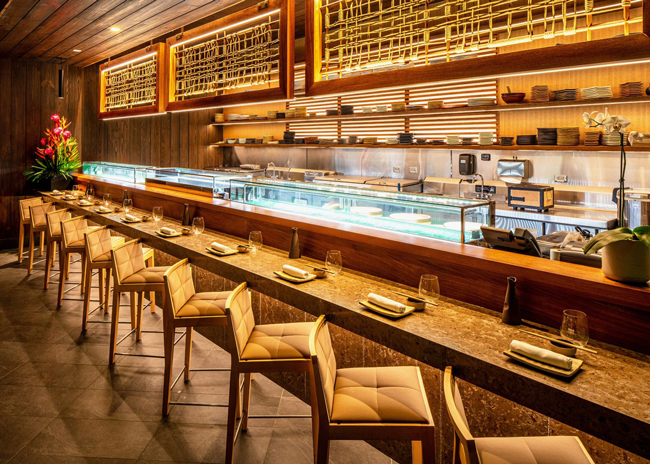 The main dining area also houses Osaka Nikkei’s sushi bar, which was given different treatments to help it stand out.

“The whole space has a lower ceiling, so it feels a little more contained. It’s clad in wood and is stained darker than the rest of the restaurant. That makes it feel more cave-like and cozy,” Herrera says.

The sushi bar also features three wooden frames filled with a woven material. This helps soften the sushi bar and can be thought of as fishing nets, she added. 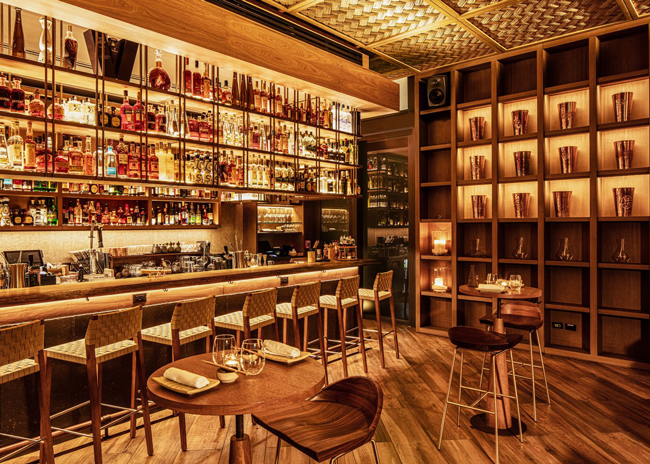 Past the dining area is the restaurant’s bar/lounge. While bars are placed toward the front in most operations, this location away from the entry was influenced by the restaurant’s unusual footprint. This turned into an advantage, says Herrera. “It has the potential to be more loungie, have music that’s a little higher volume and have its own atmosphere separate from the main dining area, which could be a little more formal.”

The bar has several strong Peruvian design influences. This includes the ceiling, which has a cloud element made of a woven fiber common to Peru, as well as woven bar stools. The bar also has a shelving unit for displaying modern interpretations of the quero, a traditional Peruvian vase.