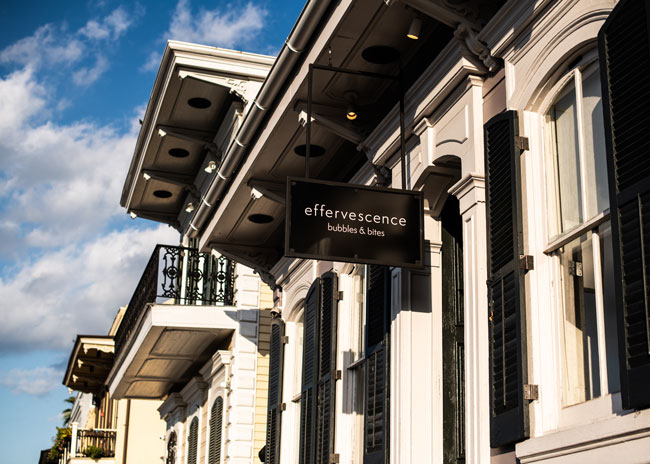 In this Q&A, Crystal Hinds, owner and operator of effervescence in New Orleans, talks about the design and development of her restaurant, which opened in March 2017 in the Big Easy’s French Quarter. Hinds partnered with Designer Kelly Sutton and Architect Corbett Scott for the space. The chef-driven champagne bar offers a selection of more than 210 bottles, 32 by-the-glass options, flights and a variety of small plates meant for sharing and socializing. And the team behind the design turned the idea of champagne bubbles into a fun, sophisticated restaurant space. 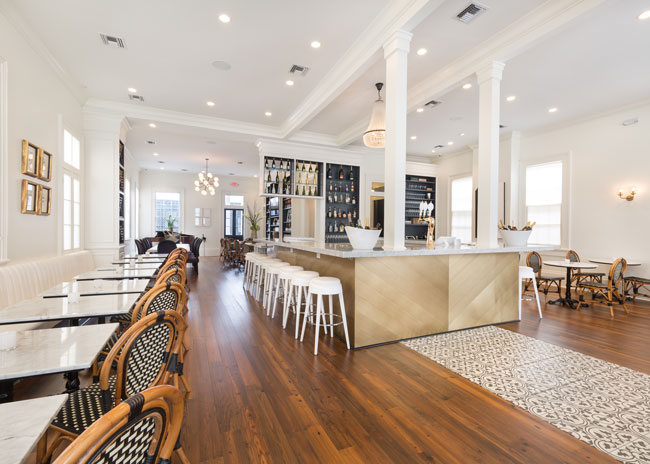 What is the overall design concept for the space?

CH: The concept stemmed from my idea of having a large open space that also showcased smaller areas where guests could create and personalize their experience. I definitely wanted a large u-shaped bar and a lounge area with couches and chairs by the fireplaces for sipping wine and bubbles. So many of the old French Quarter bars have several small rooms and a long bar against one wall. I wanted everything to be open, so everyone felt like part of the party. I also wanted to include a large sharing table to recreate the feeling of celebration that I remembered from my childhood. It’s so fun to share our small plates with a nice group of friends.

Can you give us an overview of the space?

CH: The building layout, spanning 2,554 square feet, is one large rectangle for guests to dine or lounge, with a back courtyard/patio space to enjoy nice weather. The kitchen extends into the right side of the yard to the back fence. We did not add any space. I was told this was all part of the original circa 1890s Victorian Center Hall Cottage that was originally a family home. The TV station next door, WWLTV, used the building since the 1970s as a recording studio, and they gutted the inside to build insulated small sound rooms and offices. When I saw it for the first time, the old wood floors were covered with indoor-outdoor carpet, the ceilings were lowered, and all the windows were covered up. All the walls were covered in layer upon layer of sound proof material and insulation which had to be removed to reveal the beautiful light and height. Luckily, the exterior, windows, and much of the original moldings were intact, and my skilled woodworker was able to match the missing pieces and repair the windows. An additional quaint courtyard in the back with a three-tiered iron fountain and a dark French Quarter green lattice laced with fig vine and twinkling lights provides additional dining space. 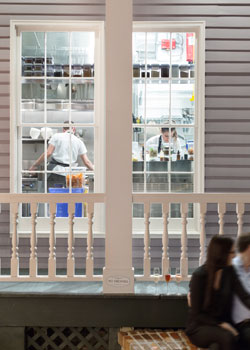 effervescence's kitchen in NOLA; image courtesy of Patrick LorenzWhat about the kitchen?

CH: The kitchen is tucked away in the back of the restaurant. It is not an open kitchen in the classic sense, but it has a beautiful window that overlooks the effervescence courtyard and allows guests a glimpse into the culinary happenings by Co-Executive Chefs Evan Ingram and Brenna Sanders.

CH: The color scheme relies heavily on whites, blacks and golds with pops of color, creating the perfect setting to celebrate everyday luxury. Accents feature deep red in the Anna Kincaide custom pictures over each fireplace. The fabric covering the sofa in the front right and the dining chairs in the back room took forever to choose. I wanted something rich feeling but not too fussy or dressy, and not particularly feminine or masculine. I finally settled on a deep aubergine velvet fabric. I figured the red wine and Lambrusco spills would not show too much! The floors are original wood with medium oak stain and finish. The walls are sheetrock with a beautiful coffee color that calls to mind a posh Paris apartment. The ceilings are sheetrock as well, with added white beams in the entryway ceiling through the middle of the bar to mimic where the center hall would have originally been and give guests the feel of how it would have been originally laid out. 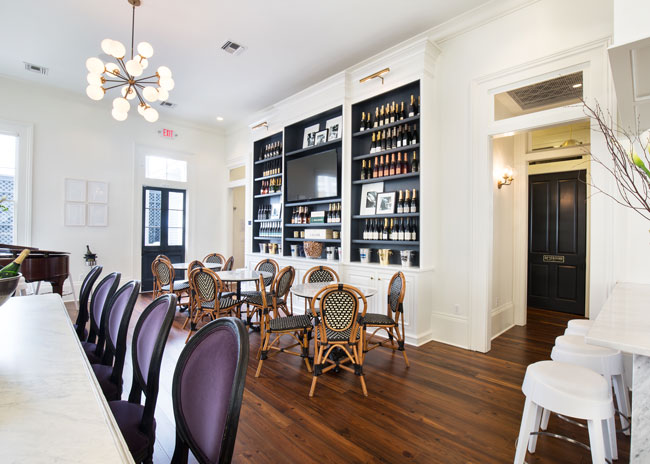 What did you choose for the furnishings?

CH: Furnishings are a mix of traditional and modern. The team used Carrara marble on the bar, square bistro tables and the large sharing table. The barstools are all white with no back to keep the bar clean and uncluttered. We framed the bottom of the bar in gold sheeting in a herringbone pattern. French rattan bistro chairs flank the smaller tables and comfortable lounge furniture surround both fireplaces. One fireplace has a sofa, fabric chairs, a black marble top coffee table and a smaller brass side table. The other fireplace has four large leather club chairs with a round white marble coffee table and two small brass tables for a cozier setup. 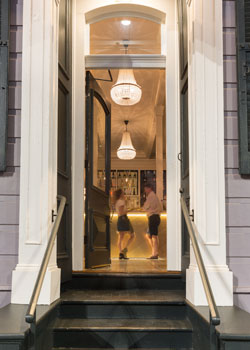 Custom-made chandeliers dominate the entrance at effervescence in NOLA.

What about the lighting?

CH: The lighting is one of my favorite design touches! A large part of my budget went into our two large, custom-made chandeliers that greet you when entering effervescence and can also be seen through the glass door and front windows. They are enormous, traditional-style chandeliers but with frosted round beads that remind me of bubbles. We carried the bubble theme through the lighting in the entire space in a subtle way. The hanging pendants in [what we call] The Bubble Hall were hung at different heights so when walking to the restroom it looks like floating bubbles in a way (or that might be the Champagne talking). Even the sconces along the walls are round but with a nod to history with the design and antique brass finish. The back-light fixture is a modern Restoration Hardware piece which gets lots of compliments. The photo lights and wine case lights are traditional. Every light fixture is on a dimmer so we can create the mood we need to set. 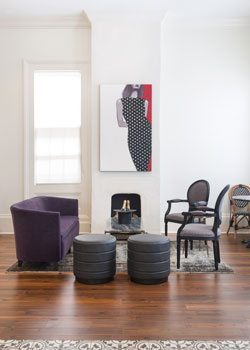 CH: effervescence features four pieces of original artwork. We commissioned the Anna Kincaide “man in a suit” painting and a matching woman piece after seeing a similar one in Gallery Orange in the Quarter. I told my friend that the painting was what I wanted effervescence to feel like. A year later, I found my spot, but of course the painting had sold. I could not forget the feeling that her painting evoked in me and it was a very important design element for the interior. The other two paintings I acquired from Kurt Pio, a South African artist I love. I bought the Bollinger first and it looked lost on the wall all by itself so Tracy Geilbert, the gallery owner, found another champagne bottle painting by Kurt. His show was sold out before he even arrived in New Orleans, so it was not an easy job getting another one. I could have sold both many times as our guests adore them. 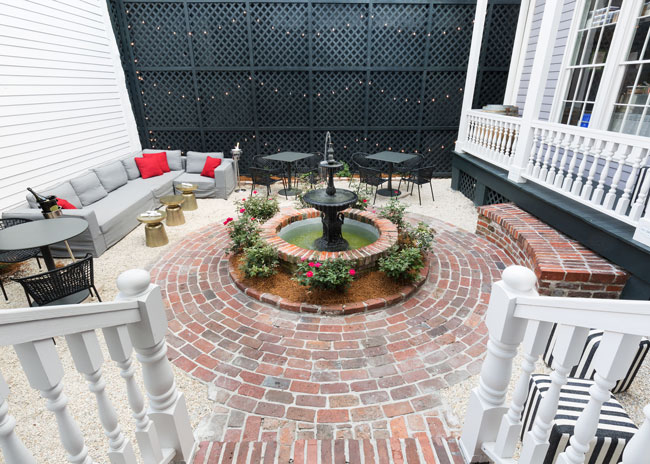 Any other unique design details you can mention?

CH: Another unique design feature are the black and white oversized cement square tiles in the entrance of effervescence. It looks modern but has a nod to tradition honoring the black and white old tile flooring in many French Quarter restaurants. Also, architect Corbett Scott suggested the idea of using antique mirror tile behind the sinks in all the bathrooms. In addition, we had the tile installer lay them in a unique pattern similar to the brass bar front, and it’s so stunning that not much else was needed to decorate the bathrooms.