Vintage Chandeliers and 19th-Century Charm at Carter's in Nashville

Taking cues from its past, Union Station Hotel Nashville underwent a recent major renovation that transformed accommodations and included a new bar and restaurant concept, Carter’s, that blurs the lines between the restaurant and the lobby. 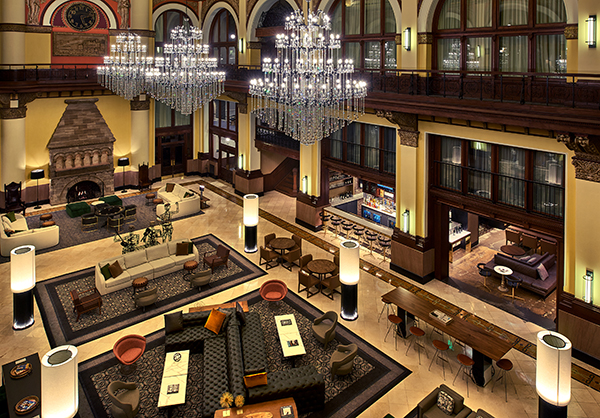 A boutique hotel located in a landmark building that used to house the eponymous train station, Union Station Hotel feels as grand a 19th-century rail station should, complete with a 65-foot barrel-vaulted ceiling and 100-year-old Tiffany-style stained glass.

Hotel restaurants are becoming destinations in their own right. With that in mind, the design team transformed what had been two separate spaces — the hotel restaurant and the bar — into a single venue, Carter’s focuses on shared plates and craft cocktails. To incorporate the two spaces and create a natural flow from the dramatic lobby into the restaurant, walls were knocked out and spaces reconfigured. 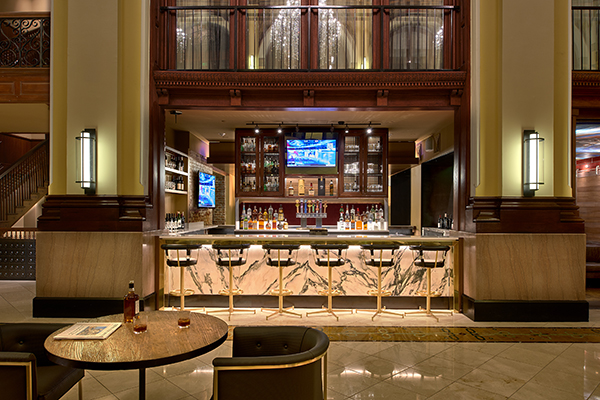 “The bar is an extension of the lobby because what we’ve found is the lobby is what entrances people when they come here,” says Mike Nelson, general manager of the hotel. “Some people want to see the history of the train station. We opened up Carter’s so we could give people the experience of being in the lobby and taking in the sights. It’s a completely different feel than the bar we had before that, which was behind solid oak doors.”

There were some pleasant surprises uncovered during the renovation. When the construction team lifted the wooden floor near the bar, it found some of the original tile floor that was laid in 1900 when the train station was built. The designers left this intact and filled in any broken areas with cement, providing a sense of the history of the building. 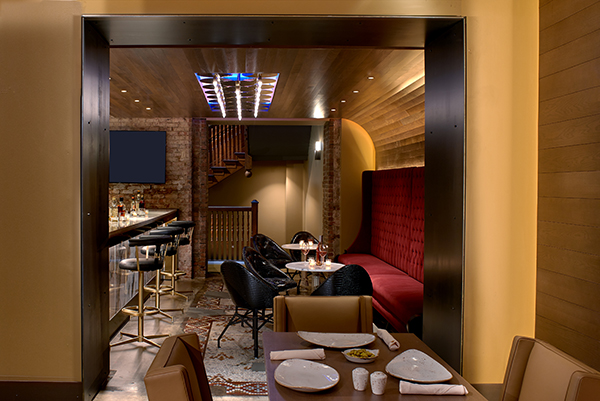 And, when removing wall board from load-bearing columns, the builders discovered an original brick column. They opted to incorporate the element into the design. Now, a brick column stands directly next to the bar. “So, you have a very contemporary feel with the black leather and the white marble and the modern artwork, juxtaposed against the old worn brick walls and the tile,” Nelson explains.

The bar is in the space that once housed the station’s ticket office, and the original schedule board now hangs just outside it. Former chandeliers were replaced with replicas from the Italian company that made the originals. 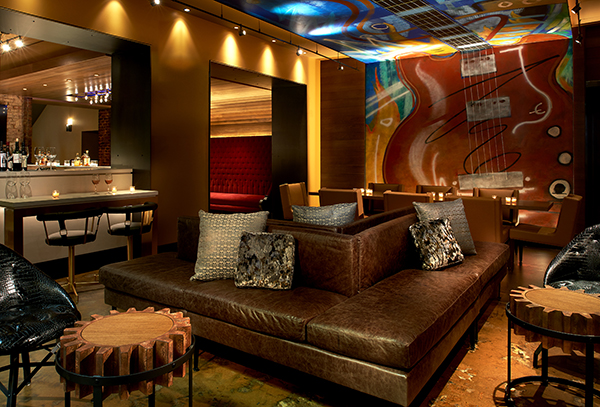 All of these elements mirror the Richardsonian Romanesque architecture on the exterior of the building. “There’s a sense of power and awe to the building exterior,” Nelson says, “and that sense is now still there when you come inside. We’ve also maintained the feel of a train station because it’s a lobby, so you have people coming and going. The building’s exterior projects a sense of power; the interior inspires a sense of awe; and they work together to make Union Station a historic and a contemporary icon in Nashville.”

Despite all these relics of the days of yore, the renovation brought a much more sophisticated and contemporary feel to the hotel, which originally opened in 1986. “Some people are surprised at seeing a modern facility inside this iconic building,” Nelson says.