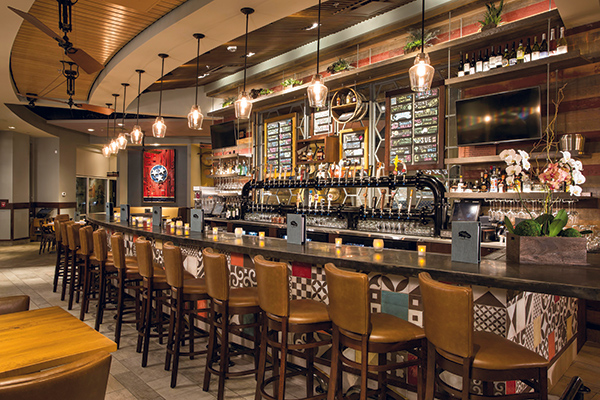 Tupelo Honey Cafe uses glycol-chilled systems, which means beer comes out of the taps at between 30 and 32 degrees F. The number of tap beverages featured in restaurants continues to rapidly expand across the country as operators expand beer offerings into wine, cocktails, coffee, mead, kombucha and anything else they can put into a keg or barrel. Taps are not only growing in diversity but in number, too. A handful of taps used to be fairly standard at a bar, but now to turn heads, you need a dozen or more, which many restaurants are implementing.

As a result, designers now must integrate the tap handles into the design of restaurants, too. “Branding on the handles is a new vehicle for getting the message across. It’s not just the beer label anymore; it’s a great way to highlight the personality of a restaurant,” says Jhipo Hong, creative director of dash design, a global interior design and brand consultancy firm in Long Island City, N.Y. 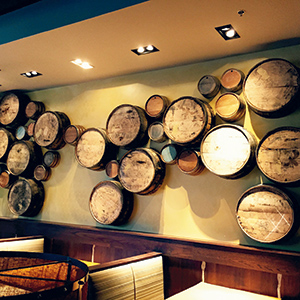 Tupelo Honey Cafe highlights its drink menu in its decor.Tap beverages are also fresher and more consistent than bottled alternatives, and this can further add to a brand’s reputation, Hong says. Still, transparency is key. “Not knowing what’s on the other end of the line could be disparaging. So, we are looking to make the actual keg room a part of the bar experience, clearly visible to patrons.”

But extensive tap systems aren’t for everyone, Hong adds. They don’t work where the bar is about theater, and they often don’t work in restaurants with an older clientele. Restaurants must also make sure tap beverages fit with the food they’re serving, says Brent White, design director at Tesser Inc. in San Francisco. “A craft beer could make your food appear to have more crafted relevance, for example,” he explains.

As its brand evolves, so too does Tupelo Honey Cafe’s beverage business. And taps continue to be a central figure in this evolution. In fact, the brand’s considerable growth in this area means the concept’s new builds measure at least four times the size of the original restaurants — and in some cases are almost nine times as extensive. 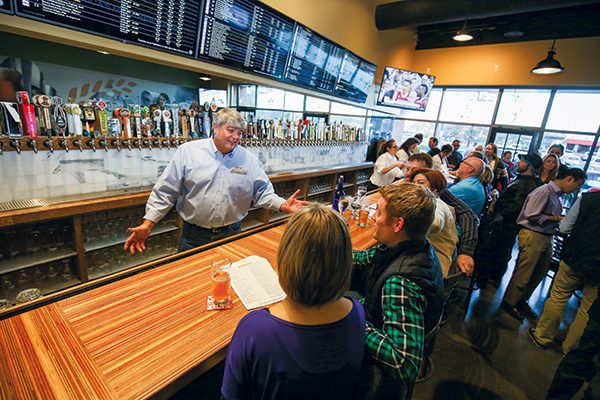 More than 100 tap handles line the bar at Growler USA.When Tupelo Honey opens its 14th location in Denver in September, the restaurant will feature a whopping 54 taps. This is significantly higher than even Franklin, Tenn., where the concept inflated its tap system to 40 when it opened last fall.

This represents a big move for a restaurant chain whose first exploration into taps meant eight handles, “but it turned out to be cost-effective, and making an investment for taps is easy,” says the chain’s beverage director, Tyler Alford. “You pay capital to put in the system, but the ROI is almost immediate.”

Tupelo Honey’s taps contain a mixture of beer, wine and cocktails, and the concept is experimenting with draft coffee. “We saw that by increasing our taps, we were increasing our overall profits,” says Alford. “The stores with more taps (22 to 40) sell up to 50 percent more beer, wine and liquor by volume of sales mix. If we had stayed with the lower tap model (8 to 12), we would have given up over a million dollars in beverage sales in 2015.”

The plan going forward is for all stores to have 40 taps, except in states that already have high craft beer consumption, like Colorado, where there will be more.

In the process of adding tap beverages, Tupelo Honey learned a lot. “You have to consider the restaurant layout and the process by which you’re positioning everything,” Alford says. The two major considerations are getting your beer cooler as close to the bar as possible and whether your tap lines will go underground or overhead, he explains. 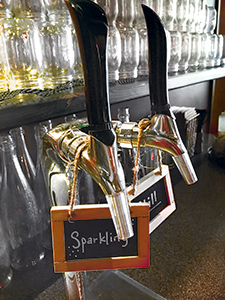 Carbon Beverage Café offers everything from coffee and kombucha to beer and wine on tap.At the Franklin location, the tap lines run 125 feet long, which means when they’re cleaned every two weeks, an awful lot of beer is emptied from the lines and thrown out. “When you are dealing in craft beer and with this many taps, it’s hard to get proximity to your bar,” Alford says. “You’ve got a significant amount of dollars tied up in those lines, and we’ll have $16,000 to $17,000 of waste in beer at the Franklin location per year.”

There have been additional issues at the Franklin store. “Somewhere, a line broke or got cut underground, and we lost two or three kegs and didn’t realize it until we got overflow and backup,” Alford says. “For this problem, a complete chase of 20-plus beer lines had to be pulled from underground to replace the one damaged line and then be put back in place. But when that chase is curving around underground and making four or five 90-degree turns, it’s difficult.”

Going overhead makes things easier because it’s more accessible, Alford says. In Denver, the bar cooler will be almost directly behind the bar, and the lines, which will run around 80 feet long, will go over the ceiling and come down via 17-foot-long copper pipes. “These will be a huge, eye-catching part of the bar,” Alford says. “Going forward, we’ll prioritize that overhead system.” 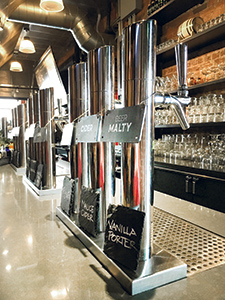 Tupelo Honey uses glycol-chilled systems, which means beer comes out of the taps at between 30 and 32 degrees F. Yield per keg is about 97 percent — far above the industry standard of 75 percent to 80 percent because glycol produces less foamy beer since there’s less waste. “So we’re making more money and more profitability,” Alford points out.

The line of tap handles at Growler USA creates a veritable wall. More than 100 handles stretch behind the bar at this craft microbrew pub that opened in Charlotte, N.C., in January.

The bulk of these taps — around 80 — contain beer; 8 are for wine, 1 is for chilled water and 20 are for miscellaneous drinks such as kombucha, hard cider, mead, root beer and cold-pressed coffee. The kegs for the beverages sit behind the bar, and short lines run through the ceiling to the tap handles.

As you can see from the description above, the Growler brings its tag line — “True to the Brew” — alive with its operations. “We designed the system with our tag line in mind. We designed it to deliver the beers in as close to the way the brewers wanted, so consumers end up getting the best craft brew they can,” says Ron Curnutt, executive vice president of operations.

A regulator sits on the keg cooler wall in the back of house to alter the pressure at which each drink is dispensed. This pressure can vary widely from 8 pounds to 16 pounds of pressure for different brews. “This is one of the most sophisticated systems,” says CEO Dan White. “We change the pressure based on a brewery’s specs. We want to maximize the experience of tap beer.”

The double-stacked kegs sit behind the back wall of the bar, and Growler keeps about 40 in backup. It doesn’t need more than that because when a keg blows, the restaurant changes out what it serves. Each backup sits on a keg dolly. Staff use a hoist and pulley that hangs from a beam down the middle of the cooler to move the kegs into place.

In the front of the house, the collection of tap handles creates a striking visual. A staff member changes each handle when putting a new beer on tap. “There’s so much creativity in the branding,” White says. If a brewery’s too small, Growler uses a generic tap handle.

The tap system uses what’s known as the Guinness blend (75 percent nitrogen, 25 percent CO2) for beer and wine, while the coffees go through nitrogen lines. The gas that’s used on each line can easily be changed through the regulators.

Curnutt designed the system carefully to have shutoff valves for every bank of 8 taps “so if there’s a leak, we can quickly ascertain where it is and isolate it, and we’ll still have 92 beverages on tap.”

Alcohol and non-boozy drinks come pouring out of the taps at Carbon Beverage Café, a cobranded (with Habit Doughnut Dispensary) fast-casual concept in Denver, Colo.

At the heart of the operation, which opened last August, is a Modbar system, a modular under-the-counter system with a steam wand and stunning taps that rise like cobras out of the bar. These make espresso and specialty coffees. This is the first thing customers see when they walk in the door, and they’re at table height. Another 18 taps run along the regular-height bar.

“We wanted the Modbar to be low to remove the impediment to the communication between the barista and customer,” says owner Lisa Ruskaup. “But we wanted the bar to be more traditional.”

The first taps after the Modbar are non-alcoholic — cold brew coffee and kombucha; then, there are craft beers, wines and cocktails. Ruskaup uses different gases for different products. The Modbar system uses nitrogen to force the beverage through the taps, as do the kombucha and cold brew coffee taps; wine uses argon gas; and the beers use the Guinness blend. The cocktails typically use that blend, too, though if they use a more fragile spirit like, vermouth, they’re poured using argon, too, she says.

The entire system is direct draw since the kegs are directly under the counter, “which means it’s incredibly simple and clean,” Ruskaup says.

It also means she can play with the taps and top up a beer with coffee or add a kombucha float to a cocktail, for example. And it allows her to tap directly off a barrel. Her rosé wine is served this way. “It’s like a bag in a box, but it looks like a barrel, and it’s another way for us to extend the idea of tap product,” she says. “Plus, the price per ounce is pretty exceptional.”

However, because the drinks require different gases, “if we change our mind about what we want to put on tap, it’s really hard,” Ruskaup says. “You have to really think ahead.”

She’s made adjustments to the cocktail and wine programs since she opened. Citrus is added to cocktails that require it after the drink is poured (the venue juices daily), which Ruskaup says “is better for the integrity of the drink and the equipment and also adds some showmanship at the bar.” And she’s reduced the number of wines on tap and increased the bottle program so acidic wines that don’t sell as well aren’t deteriorating in the tap system.

Carbon Beverage Café also features a carbonation station, where customers can carbonate anything for free and can even purchase one of the 10 to 15 daily house-made syrups for 50 cents a shot.

The big challenge has been in the back of house, she says, which needs to hold a backup of everything — so 18 backup kegs. “In the future, I’ll think of how we’ll do that backup better. As you have more volume, you need more backup, and it’s against the law in Colorado to have off-site storage of liquor,” she says. She’s also found that the dairy for coffee requires significant storage.

Ruskaup’s current backup system barely suffices. She has a 10-foot-by-2-foot walk-in that’s used for the entire restaurant. “In the future, it would be great to have [our own] 10-by-10 walk-in for the volume level we are looking at.”