At the start of the year, GameWorks, Inc., an eight-unit “eatertainment” chain that pairs gaming and dining, had plans to add five units and dramatically increase its presence in the esports segment.

In the wake of the COVID-19 pandemic, the chain that caters to Millennials, teens and young families, has had to temporarily shutter every location, prompting GameWorks to rethink its carefully constructed plans — like almost every other food and beverage concept.

Chairman and CEO Philip N. Kaplan joined GameWorks in June 2018. His background includes executive positions in both real estate development and technology companies. Since joining the company, Kaplan has spearheaded an initiative to ensure all venues included esports lounges. On average, each location, which ranges from between 20,000 to 30,000 square feet, features more than 120 of the latest and most popular arcade and videogames.

Under Kalpan’s direction, the chain also unveiled its branded restaurant, The Works Kitchen at Gameworks, which features modern American bar food as well as healthy options. In this Q&A, Kaplan candidly addresses the chaos caused by the pandemic.

Let’s start by talking about where GameWorks was at the start of 2020.

PK: Something close to 300 million people are playing competitive videogames. It’s a huge global audience and growing rapidly. Since GameWorks was involved in it from the early days, our thought was that we could use the company as a platform to go after a model that is a combination of online and in-venue esports. We’re close to 50/50 revenue between gaming and F&B. I’m sure you’ve seen various “eatertainment” business models, and we’re slightly heavier in the gaming side than the F&B side. Whatever the mix is, it’s a great business model, because you can have longer guest dwell times than you would in a restaurant alone. So, there’s a cross-selling ability and, therefore, the pricing power on the restaurant side is independent from what you’d see in restaurants.You can think of our space as being divided up three ways: We have a restaurant/bar area and we’re typically putting in about 120 seats. It varies, depending on the location. So about 3,500 to 4,500 square feet of restaurant with back-of-the-house area to support it. The arcade floor is in the 9,000 to 10,000-square-foot range. The esports lounge is another couple thousand, making our average footprint — give or take — about 20,000 square feet. Our model works in urban or denser population suburbs.

And how has the pandemic affected GameWorks thus far?

PK: We are no different than anyone in the industry. We went from two years of having industry-leading same-store sales growth — we had double-digit sales growth through week 10 of this year — to all of a sudden having zero income and furloughing staff. We just look like every other company in this industry regardless of size on that front. And we’re not a large company. But we are a company that was going after this great opportunity and using this platform that’s got seven-figure annual visitation numbers driving leadership in a great space.

Now, I do not see us being able to open as many stores this year as we’d planned, but I’d still like to open three if we can. Of course, there’s what we know and there’s what we don’t know. So, usually when you build a financial model, you can make certain assumptions based on peak periods, income and the economy, but I can’t do anything like that because I’m not in the crystal ball business. We can’t say when and where we’ll be allowed to open the doors. But our first priority is that we are able to reopen and then, when we do so, we’re able to retain certain key team members. We anticipate some disruption around team members. I’m sure everybody is going to have some. So a big chunk of my time right now is working the phones and keeping in touch with key people. We can’t afford to pay everybody when there’s no revenue coming in. We’ve furloughed about 97% of our staff.

On the first day we had to shut down with no notice, we decided we have one strategic priority: that the best thing we as a company can do for our team and our guests is to survive and be able to reopen. If we keep paying everybody now and we don’t have any cash left on the balance sheet when it’s time to reopen, we won’t be able to. Yes, there are programs that we may be eligible for, but even a good chunk of money goes really fast when you are paying people and landlords. 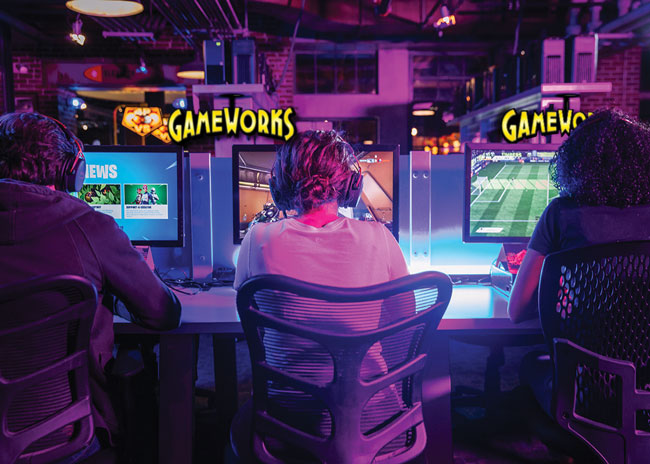 Social distancing orders may lead to very different setups in both restaurants and eatertainment venues. Image courtesy of GameWorks

What has the pandemic meant for your leasing arrangements?

PK: We are on the hook for rent but every landlord has the same issue as we do.

My real estate experience allows me to speak [the landlord’s] language. It’s a messy world until cash flow can start again. Some landlords are more understanding than others, but we sign 10- to 20-year leases and form long-term partnerships. We bring thousands of teens and Millennials onto their property on a regular basis so they have to work with us, but we don’t approach them arrogantly.

Was takeout and delivery an option for GameWorks? How are you managing to stay engaged with your core audience?

PK: In San Francisco, I can walk out my door and pass dozens of restaurants in a 10-minute walk. And I could tell you a lot of them were shifting to takeout initially, but the reality is that you often don’t cover the cost of operations with a move to takeout. It makes sense for chains that are set up to do it to begin with. But if you’re shifting to it as a new model, it’s another animal. It wasn’t a viable option for us in eatertainment. We didn’t think our brand was thought of as a go-to food brand. We have a great chef on staff, he’s come up with a great modern American dining menu, but our brand is still destination food.

We believe in the model of continuous guest and player engagement via in venue and online, and we were just happily in the process of launching online tournaments as this coronavirus began to kick in, but you can’t hit a switch and expect to replace all your revenue. We have some things going on there to keep us relevant to our players, but we still have to endure a multi-month shutdown, it looks like.

What are your plans and expectations around reopening?

PK: I’ve seen various strategies from various players, but I think we all know that there are going to be many entities that will not come back from this. The restaurant industry’s same-store sales growth going into this was about 1%, and this is in a high fixed-cost business. You need same-store sales growth in order to stay profitable. So, we’re hoping that despite the fact that consumers are being retrained to stay home and engage in takeout that pent up demand coupled with reduced competition will mean a better operating environment for those that survive. Clearly that will vary from place to place. We’re on the West Coast, in San Francisco and Seattle. These are tech cities and when the economy roars back to life so will tech. Other industries and regions may not be so fortunate. But I don’t have a crystal ball, and this is a crazy thing to navigate. We have to look at the operating environment and position ourselves for a possible rebound. So that’s our plan.

PK: After a crash, we will also see people forced to be creative. So, there will be a really big kick up in the next generation of creative ideas. And, if there’s a silver lining, it’s that people have become closer to their families. Lots of people who often travel for work are now at home with their families. But as we emerge from the pandemic — however many people unfortunately lose their lives to this — everyone will be affected by the social and economic problems it creates.