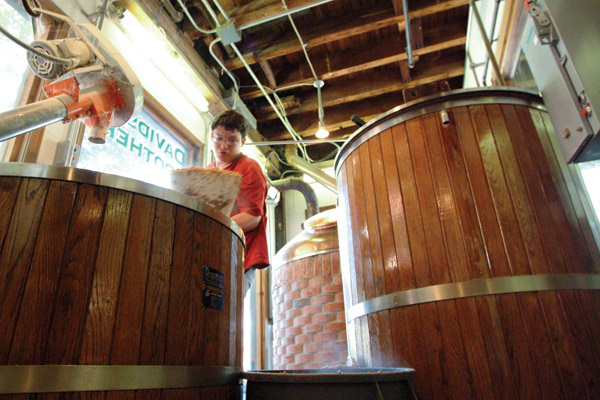 While overall beer sales declined by 1.9 percent last year, craft beer continues to boom, with sales rising 17.2 percent in 2013, according to the Brewers Association. That follows several years of double-digit growth, a rising tide that has buoyed the building of restaurant-brewery combos, aka brewpubs, a casual-dining category that grew nearly 7 percent last year, according to the Boulder, Colo.-based association.

Concept designs showcasing working brew kettles and shiny stainless fermentation tanks provide a point of differentiation for restaurants. On-premise brewing, with its message of craft, quality and freshness, drives traffic and beer sales, and it's a trend that more casual dining operators are working to tap.

"This is the strongest period of net openings since the mid to late 1990s," says Bart Watson, Ph.D., staff economist for the Brewers Association. A shakeout period followed that first wave of brewpubs; today's operators tend to be savvier about combining beer and restaurants and more varied in their approaches. "By all accounts, the current period matches demand more closely than the earlier period," adds the economist.

And anecdotal evidence suggests the brewpub growth trend will continue. "Today we see brewpubs being combined with a variety of cuisines, price points, formats and dining styles," says Watson. "The sustained growth of the brewpub phenomenon shows the incredible demand for great food and beer pairings, and the amazing synergies that can emerge when both sides of the equation are executed by a single business." 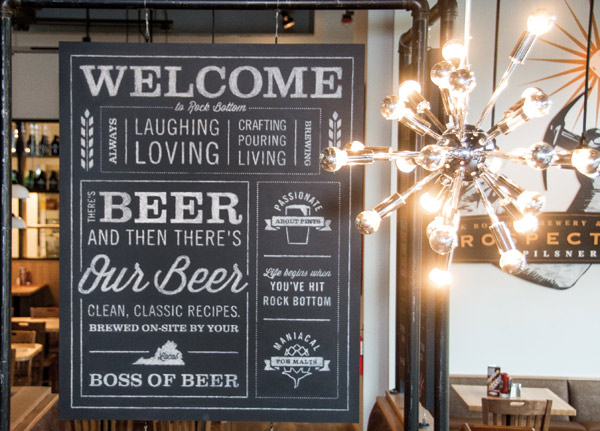 The use of wood and other warm-colored elements gives the dining spaces at Rock Bottom a comfortable yet somewhat rustic atmosphere.Chattanooga, Tenn./Broomfield, Colo. CraftWorks is a multibrand casual-dining company and the largest brewery-restaurant operator and franchisor in the United States. Its 195-unit stable of concepts includes 73 brewery-restaurants: 29 Gordon Biersch brewery restaurants, 30 Rock Bottom Restaurant & Brewery locations, as well as a few Chophouse & Brewery and Big River Grille & Brewing Works locations and some one-offs.

The pioneering company got its start in 1990 when Frank Day opened the Walnut Brewery in Boulder, Colo., which remains in operation today. This was during the initial heyday of the craft movement; Day believed in the natural affinity of beer and food, and built 25 to 30 brewpubs over the next decade. The CraftWorks entity grew out of a merger in 2010 of the Gordon Biersch and Rock Bottom chains, which remain the core brands along with Old Chicago Pizza and Taproom restaurants.

"We've been at this almost 25 years now," says Kevin Reed, director of brewing operations. "Today there are a lot more breweries open, a lot more brewpubs. Over the years, the design sensibilities have changed as we use the brewery differently and serve different types of beer."

Although CraftWorks has developed a few brewpub prototypes over the years, many of the restaurants are one-offs, going into either in-line spaces or built-to-suit locations in downtown urban centers. "In general, we tend to go for a big, open feeling, a significant communication of space," says Reed. "There is a lot of interaction between brewery, restaurant and bar."

The company enjoys a fairly high level of bar sales compared to overall sales, Reed adds. "It's better than at many casual-dining restaurants. The brewery plays a big part in that, and it is a significant piece of our bar mix." And their profitability. He points out that after covering the initial costs, "significant incremental profitability comes into play. The cost of goods is relatively low because you are making all this beer from water, grain hops and yeast. So the beer is less expensive."

CraftWorks' newest location, a Richmond, Va., Rock Bottom unit, features an in-line brewing system that stretches about 50 feet, across part of the bar, and displays all 5 fermentation tanks and brewhouse vessels behind a glass panel. "It's an impressive showcase," says Reed.

While it can be a profitable addition to casual-dining concepts, brewing beer on-site requires significant investment and long-term commitment in order to make truly great beer, Reed notes. The investment includes costs for equipment and extended rent for that space, as well as salaries for the brewing team. "To some extent there is a cultural schism," he adds. "Restaurant folks may like beer and are used to running restaurants, but running a brewery requires a different perspective."

While enjoying a few brews at the Wharf Rat brewpub in Baltimore, Davidson brothers Paul, John and Rick had an epiphany that convinced the trio to open their own restaurant and brewery operation in the quaint town of Glens Falls in 1996.

An old, three-story mercantile building, part of a historic block built in 1865, houses Davidson Brothers Brewing Company. "The building has the look of the original raw commercial space, like early 1900s industrial," says Rick Davidson. "We didn't have money to hire a designer, so we did it ourselves, and back then there weren't a whole lot of brewpubs to look at for examples."

The seven-barrel brewery uses an old-style British system, featuring a brick brew kettle and fermenters without tops. One person can do all the brewing. The restaurant features little in the way of brewing paraphernalia; instead odds and ends of machinery from local industries such as shirt-making, quarrying and paper mills decorate the dining room.

"One of the points of being a brewpub is that you want to set up the brewery so people can see it," points out Davidson. In this case, the brewery sits at the front of the narrow, 22-foot-wide storefront in plain view of passersby. Customers enter the restaurant around the corner on the side street. The barroom shares the space with the brewery; the second floor has more dining room seating. The brewpub seats 230 people, including 90 outside.

Tourism, including visitors interested in the historic aspects of the space, largely drives the Davidsons' business. To handle greater demand for its beer, the company just built another larger brewery a few miles away. The new facility boasts a retail store and a small tasting room. Besides generating retail sales, "the brewery helps drive traffic to our restaurant," says Davidson.

When the restaurant opened 18 years ago, the area was underserved by family restaurants; back then, there were only 22 breweries, now there are 160 and growing. The barriers to opening a brewery these days are lower. Some states commit to helping promote craft beer, and regulations are easing, he says. Now a lot of microbreweries want to get into the restaurant end to offer not just a tasting but a full dining experience. 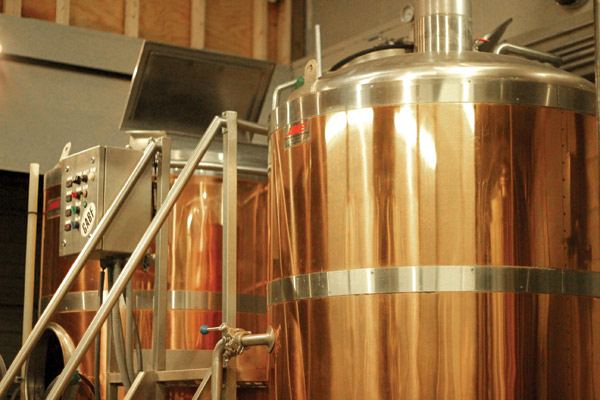 Home brewer Bob Sandage turned his hobby into a business in 2011, when he and his wife Kristine opened Wrecking Bar Brewpub in Atlanta. The turn-of-the-century mansion where the brewpub operates had previously housed a church, a dance studio and an antiques shop before the current restoration. Now, the historic building houses a number of production, restaurant and event spaces.

The Marianna, a 3,000-square-foot multipurpose event space, now occupies the main floor. With its original early 20th-century architecture, the Marianna hosts luncheons, receptions, fundraisers, showers, weddings and corporate events for 50 to 250 guests. The brewpub resides in the basement, where 18-inch-thick granite walls keep the temperature constant, ideal for brewing, says managing partner Stevenson Rosslow. The seven-barrel system sits behind the pub. Above the Wrecking Bar Brewpub's brewery is the Biergarten. There, casual parties of 40 to 100 can gaze down upon the brewing equipment as they eat and drink. Named for its use of coal storage in the early 20th century, these days the Coal Room is a nook off the brewpub for dining and live music on Sundays. Located under the original front porch of the Marianna, tucked away in the brewpub, is the Cellar, for intimate gatherings of 50 or less.

Voted best brewpub in Atlanta by the website CreativeLoafing.com for the past three years running, Wrecking Bar stands out for the quality and freshness of its beer, says Rosslow. "Beer should be consumed fresh, the fresher the better. At the brewpub, we can make beer and deliver it to customers as fresh as possible."

A lot of synergy exists between the brewery and the restaurant, which features locally sourced craft pub food, he adds. Spent grains and wort (the liquid extracted from the mashing stage) from the brewing process as well as the finished beer serve as ingredients in many menu items. And the chef helps inspire the brewer. Experimental batches have included ingredients from the kitchen pantry, including herbs, spices and even peanut butter.

Rosslow notes that making beer in-house can offset costs in some areas, because "you don't have to pay taxes, packaging and transportation. You can pass along those savings by offsetting costs on other goods. We can serve our whiskey at a better price, offer better food at a lower price than the guy down the street. That's a competitive advantage."

He cautions, however, that the complexities of having a brewery and restaurant in one space are many. "You need extra space for brewing and have additional labor costs. Brewing equipment is expensive and not easy to get these days because of the demand," he says.

Reed: In most of our places, the brewery takes up just 10 percent to 15 percent of the entire restaurant footprint, with about 35 percent to 40 percent each for the kitchen and dining areas. The company often uses tall, skinny fermentation tanks to get more volume from a smaller footprint.

Rosslow: The total space is 18,000 square feet, with 4,000 for the brewery and another 4,000 allotted for tanks and storage. The brewpub in the basement measures 3,000 square feet, as is the event area on the main floor and a top floor used for offices.

Observation Ports: Most brewpubs close off the brewing space with a glass wall, which still allows restaurant guests to view the process.

Reed: We always install glass to separate brewery from restaurant, because it can get noisy when brewing, banging on kegs, and we don't want that to carry over into the restaurant. To educate patrons about beer-making, all the tanks are labeled and there's a poster explaining the brewing process. Staff members can conduct a brewery tour from the other side of the glass even during production.

Davidson: In order that customers in the restaurant can feel close to the brewing, we put in an accordion, four-pane window. That's left open when we are not brewing, so customers at the high-top tables in the bar area are virtually in the same space. If we are brewing and it's generating a lot of heat, or we are milling and there is a lot of dust, we will close the windows.

To Theme or Not: Designers can carry over brewing materials and motifs into restaurant decor.

Reed: We are always struggling with what the proper amount of brewery themed decor is. In locations where we are barrel-aging beer, we will stack those barrels where customers can see them, and that's pretty distinctive. At the newest location, we built a custom tap tower that utilizes brewery fittings for an industrial-brewery feel. That's one way we tie in the brewery to the decor.

Rosslow: In the back of the pub are some barrels. We use the old-fashioned beer engines to hand pump the beer, which comes into the pub through a chase directly from the brewery. We also display some antique beer and liquor bottles that we found on the property.

Davidson: We didn't hang the decor on the theme of brewing because we wanted to be known as a family restaurant not a bar. However, if we have a group entertaining, the brewhouse is six inches higher than the dining room floor, so we put the entertainer in the brewhouse "on stage."