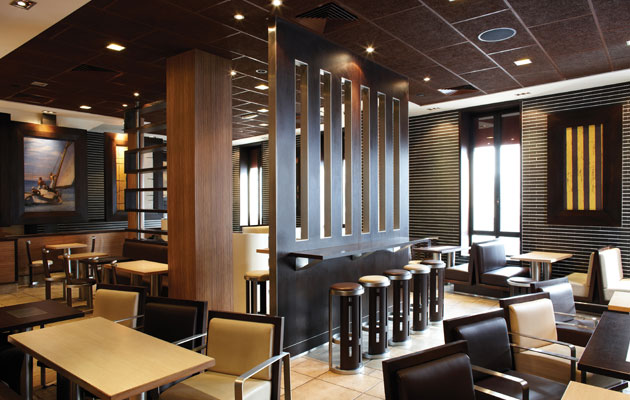 Appropriately, the resistance began in France. In the mid-1990s, Denis Hennequin, then head of McDonald's operations in France, and later president of its European operations, had the audacity to remove the statue of Ronald McDonald from the chain's restaurant on the stylish Champs-Élysées.

In place of bright murals, Da Vinci prints went up on walls. Furniture and finishes were upgraded, with wood replacing plastic.

The revolutionary approach was less rebellious than pragmatic: As the McDonald's menu was changing, it was competing not just with other imported or domestic quick-service restaurant (QSR) chains but also with traditional Parisian cafés. To do that, McDonald's had to look like a café, insisted Hennequin, who left McDonald's in 2010 to become CEO of hotelier Accor S.

Today, the notion that good design ranks with good food and good service is becoming gospel for quick-service restaurant chains. In the case of McDonald's, the redesign/remodel trend that began in France has since spread throughout the company's operations in Europe, Australia and the United States. Its largest adversaries, Wendy's and Burger King, are now hustling to roll out new looks, as well, taking the burger wars to a whole new front.

Changes in several key business variables have pushed the chains to invest heavily in remodeling their systems. Demographic changes mean the generation that grew up eating fast-food burgers and fries is now middle aged and looking for higher-quality food and service. And these diners have found just those benefits in the fast casual restaurants — such as Panera Bread, Smashburger, Chipotle Mexican Grill and others — that offer nicer environments that justify higher prices. They also offer higher-quality, more healthful and more natural foods. QSRs have made strides in matching that food quality, but many still can't offer the adult ambience that fast casuals promise.

To that end, the Golden Arches reimaged 900 U.S. stores in 2011, with many using variations on Avanzi's Euro-style look. McDonald's plans facelifts for another 800 domestic locations this year.

Wendy's, which expects to pass Burger King this year to become the number-two burger chain in terms of U.S. share, has embarked on a similar push to replace its outdated restaurants. It knows that it is playing catch-up, but Wendy's can't afford not to invest in the effort.

When founder Dave Thomas opened the first Wendy's units in 1969, "we were the emerging fast-casual restaurant of our time," Steve Farrar, Wendy's chief operating officer for North America, told analysts during the chain's Investor Day event in January. "But if you fast forward 40 years, we no longer occupy that position of distinction. As we have aged, new competitors have entered. McDonald's is investing billions. Many of our facilities are looking dated, old and rundown in comparison with the emerging QSR brands. We're clearly not the cool place to go to today."

The Wendy's Co. has committed $225 million this year to remodel 50 of its stores. It also plans to open 20 new stores, each of which will feature one of four design packages the chain is testing. Like McDonald's, Wendy's is luring franchisees to invest in remodeling with the promises of a 6 percent to 7 percent increase in per-unit sales.

Burger King Holdings, meanwhile, has done more talking than remodeling, largely as a result of its recent ownership change. In 2009, the chain unveiled its new look — dubbed the 20/20 Design — with its restaurant in Amsterdam's Schiphol Airport, a location that took in sales of more than $12 million that year. This location sports an industrial look that then chairman and CEO John Chidsey said "exemplifies our vision for the brand's future."

But in 2010, Burger King was taken private by 3G Capital, a private-equity company based in New York City but with roots in Brazil, where founder Jorge Paulo Lemann is based. Chidsey is gone, and details about the remodeling program have been scarce.

There is, however, no turning back, no ignoring the fact that traditional QSRs need more than just a nip and tuck to remain competitive. Chicago-based researcher NPD Group reported in February that customer traffic in the burger segment, exclusive of fast casual, was up just 1 percent in 2008, but fell 1 percent in '09 and another 2 percent in '10 while remaining flat in 2011. Fast casual traffic, meanwhile, was up 10 percent, 6 percent, 4 percent and 7 percent over that same stretch from 2008 to 2011.

"People eat with their eyes first," McDonald's president and COO Don Thompson told Fast Company in a 2010 interview. "If you have a restaurant that is appealing, contemporary, and relevant both from the street and interior, the food tastes better.

For further details on each chain: