A new prototype forsakes the Mexican restaurant cliches and provides guests with the feeling of being on a beach vacation.

You could almost guess the design of some restaurants just by knowing the type of food they serve. Steakhouses use dark woods and low lighting. Barbecue offers bench seating and neon beer signs.

Then there’s Mexican, with its bright, floral colors paired with folk-art-inspired decor.

Prior to its recent redesign, that’s certainly the look Acapulco Restaurant Y Cantina tended toward. Last month, though, the chain rolled out a new prototype that truly stands out. Instead of being just another Mexican restaurant, this design is takes its inspiration from beach vacations in places like the restaurant’s namesake.

“The vision was to take the idea of Acapulco...It’s all about that restoration, feeling restored. It’s also about feeling significant, feeling like you matter and capturing the genuine hospitality that exists in Mexico,” says Daniel Harf, owner of Orlando, Fla.-based Blue Ocean Works and one of the project’s designers.

At the first redesigned store, located in Downey, Calif., the beach theme announces itself at the patio near the entrance, well before customers enter the restaurant.

The edges of this patio’s covering are woven with material from palm trees, conveying the look of a traditional Mexican thatched roof structure, known as a plapa. The patio also makes use of the connection of the beach and fire — think tiki torches and bonfires — with an innovative feature. A trough has been cut into the top of two sides of the patio’s stone wall and a natural gas line with regular openings runs along the length of it. When turned on, the feature produces a flame (shielded by a glass barrier) six to eight inches high. 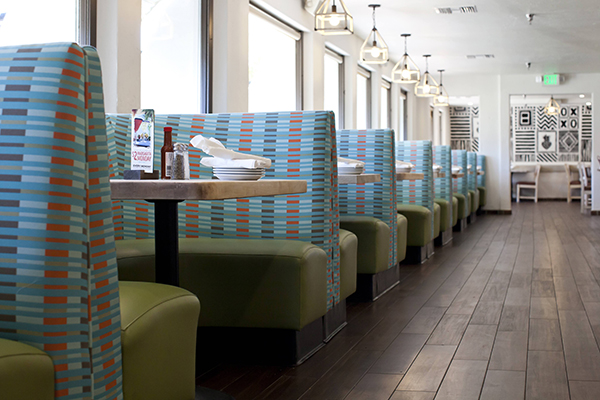 When customers get past the patio and actually enter the restaurant, the space’s beach look is first driven home in the color palette. “We looked at different images of the water in Acapulco and said, ‘There’s our color palette.’ Those beach tans, the sand colors, the splashes of vibrant color, those different shades of turquoise into blue,” says Harf.

The feeling of hospitality the restaurant wants to convey is also instantly communicated through design. The host’s stand, for example, is intentionally undersized, serving as menu storage and little else. Hosts are instead encouraged to be front and center, welcoming guests when they enter the restaurant.

In addition, just to the left of the entry, is a small bar that serves arriving customers as well as those seated at the patio. By placing a bar so close to the entry, the restaurant is able to mimic that immediate offer of a drink people get when visiting a friend’s home, Harf says.

“I can get my food too fast in a restaurant, but I can’t get a drink too fast. So if you handed me a margarita as I walked in the door, I’d be thrilled. Why stand there waiting in line? Grab a beverage.”

Further into the restaurant, diners will find several design elements inspired by the beach. Tables and chairs, he says, are made of white oak that’s been bleached and whitewashed, giving them the look of driftwood, while the bar top in the main bar is made of a sand-colored solid stone. The restaurant also uses wooden pendant-style light fixtures that are shaped like buoys, along with storm shutters on the windows — a touch that, while more Key West than Acapulco, is still evocative of the beach, says Harf.

Other design elements take the theme even more literally. Using photographs and image editing software, Harf created outlines of palm branches. He then had these outlines turned into large vinyl stencils, which are used to paint “shadows” of palm branches on the walls. Another artisan touch comes in the form of oversized black-and-white tiles that were hand painted by Harf and others working on the project. In the future, he notes, these tiles will likely be painted via vinyl stencil, much like the palm branches.

While beaches have plenty of subtle tans and whites, they also have splashes of color. Acapulco restaurant is no different, with brightly colored sea shells and pieces of coral used as decorations. Color also comes from retro-style travel posters with key brand messages from the restaurant, such as “Acapulco, an everyday escape.” 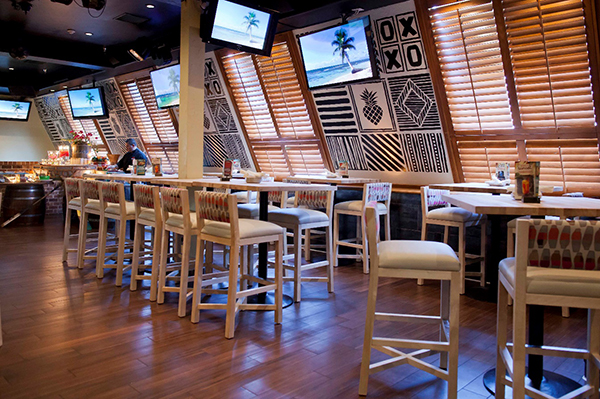 That feeling of escape is a large part of the appeal of Acapulco Restaurant Y Cantina’s new design. The appeal is only enhanced by the fact that it truly is distinct from the typical look of Mexican restaurants, Harf says

“If you want to grow, want to thrive, you’ve got to make it feel relevant...Make it cool, make it something they haven’t seen before. We carried that through the design and got away from the typical Mexico look.”