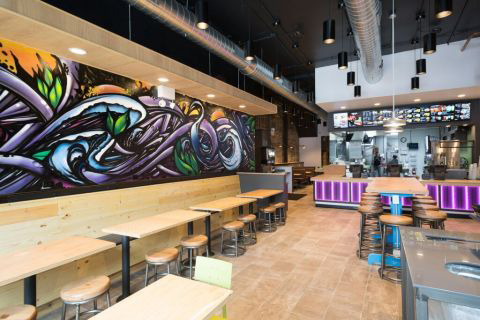 The new Taco Bell Cantina drops drive-thru for alcohol service and an open kitchen to create a new experience in urban markets. The first of these restaurants opened in Chicago's Wicker Park neighborhood this month where it also serves alcohol alongside the brand's signature items. The second Taco Bell Cantina will open in San Francisco.

The new concept was developed to meet the needs of the next generation of Taco Bell fans. "These new urban restaurants are a critical part of our growth strategy in markets where people experience our brand differently," said Brian Niccol, chief executive officer. "Today's consumers are living in more urban settings and our new restaurants cater to their lifestyle in adapting our traditional restaurant concept to fit their modern needs."

Designers incorporated five major consumer trends in the development of the concept beginning with the urbanization of the space to cater to a largely Millennial customer group. The restaurants are ideally suited to fit in pedestrian areas without drive-thru and showcase urban-inspired, mural artwork on the interior walls as well as local architecture to fall in line with the neighborhood setting.

The new urban locations will also be more energy efficient with systems including LED lighting, use of reclaimed elements where possible and recycling, according to Taco Bell execs. An open kitchen design and food served in open-face baskets will lend a more transparent feel to the space and food.

And, Taco Bell Cantina restaurants will be the first and only Taco Bell restaurants to serve alcohol. The Wicker Park location serves beer, wine, sangria and twisted Freezes, while the San Francisco location will just serve beer and wine. The restaurant also features a new tapas-style menu of shareable appetizers, including nachos and rolled tacos, during designated hours each evening.

At the Wicker Park location, brick walls and prismatic glass were restored to help preserve the 100-year-old building. The location also features a mural designed by local artist, Revise CMW, which serves as a nod to the neighborhood's history as an artistic hub.

The San Francisco restaurant, located near AT&T Park, features a patio and mobile pick-up window to cater to the quick pace, tech savvy and vibrant community.

Taco Bell has announced it's on track to add 2,000 to its portfolio by 2022, with expansion plans for additional urban markets. The chain hopes to build or remodel about 600 restaurants per year.