Game On: Eatertainment is Back at 810 Billiards & Bowling

Consumers have become bored at the sight of their own living rooms during the past couple of years as their entertainment, lifestyle and dining has been limited by COVID-19 concerns and restrictions.

But a trend that was nascent before the arrival of the pandemic is warming up again. Eatertainment concepts, which offer dining, drinking and games, were trending before the pandemic and their coming back with a vengeance after being hit hard. According to Chicago-based market research firm Datassential, 82% of Americans have been to at least one type of eatertainment venue, with Millennials the demographic most likely to frequent them.

While concepts like Chuck E. Cheese and Dave and Buster’s were pioneers, trending venues offer everything from old-school games like bowling, shuffleboard and golf to high-tech competitive gaming. According to Datassential, 50% of consumers believe these venues provide value since they double as a place where they can eat and enjoy a fun activity.

Just six years after opening its first location, 810 Billiards and Bowling is expanding rapidly. With five corporate-owned locations and one franchised venue, the chain also has plans for two franchised locations to open in the second quarter of 2022, in Fort Smith, Arkansas, and Greenville, S.C., with more to come.

Michael Siniscalchi, president of the company, wanted to get firmly established with corporate stores before he could support franchisees, a point he has now reached. “If you’re a franchisor, you should be putting your money where your mouth is and investing in the brand with corporate stores,” he says. “But our growth focus is on franchisees.” Franchising, he explains, “allows us to scale faster than pure corporate development. So having a franchise partner that knows their local market and can help facilitate that helps us ramp up the unit growth quicker.”

This is the right time to be growing an eatertainment concept, Siniscalchi explains. “There’s always demand for entertainment, and we’ve taken a traditional eatertainment experience and modernized it because that’s what a young customer expects.” And while he admits that the industry has received a “temporary headwind” from COVID-19, he believes “the long-term demand is a very bright picture.”

Siniscalchi believes the brand’s broad appeal is part of a successful formula. “We have families during the day and, as we shift into the evening, it becomes more of a sports bar dining crowd,” he says. The locations adjust the lighting and music in the evening to highlight the shift.

Guests at 810 typically come to both play and eat, and the average stay is just over two hours. “It’s a destination concept,” Siniscalchi says.

Siniscalchi is open to both new builds and second-gen spaces to expand 810. Two corporate locations were Lucky Strike bowling alleys that shuttered during COVID. “But where we really see the opportunity on the franchise side is new builds and going into entertainment districts. There’s a lot of inventory for the 20,000- to 30,000-square-foot locations that used to be large stores like DSW,” he says. And, he adds, “realtors seem to appreciate what we bring to the landscape. That’s been very effective at getting construction dollars from the landlord, which has helped make our buildouts manageable.”

The location is more important than the square footage, Siniscalchi says. He needs at least 20,000 square feet for the core concept of bowling, billiards, dining room and arcade. But has “other revenue drivers we can plug in,” such as additional games like ropes courses and ping pong. The largest store is the Myrtle Beach location, which is 43,000 square feet and includes an 18-hole mini golf. 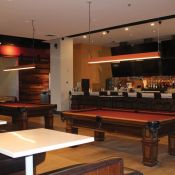 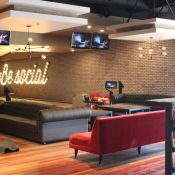 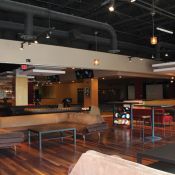 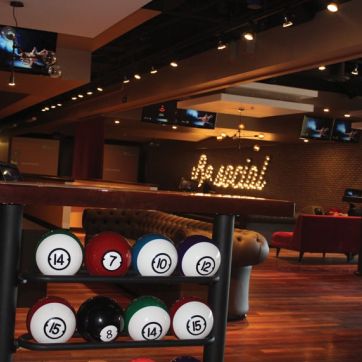 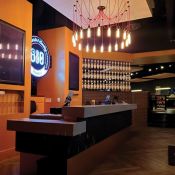 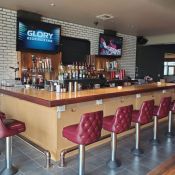