To boost sales and help patrons and employees feel more comfortable, restaurants are reducing touchpoints and seeking to create contactless experiences. While the debate may rage about what the service fallout from the pandemic will be, there are advantages to contactless pickup with speed and convenience topping the list. It’s likely the contactless methods of pickup at restaurants will stick around long after the pandemic is a memory.

“As the pandemic subsides, these will still be important considerations,” says Steve Zagor, adjunct professor at Columbia Business School, restaurant industry. “Contactless dining involves taking out food. We’ll still be cocooning at home and fortifying ourselves with portable food but less so than now.”

Here we take a look at what three operators are doing. 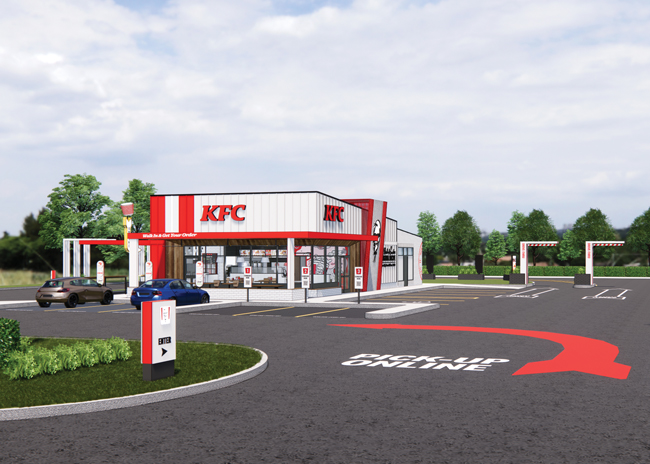 Contactless pickup has become so big that KFC has designed a Next Generation prototype store that will feature, among other things, pickup cubbies. These will be located inside the stores with dedicated parking spots for frictionless pickup for both patrons and third-party delivery drivers, says KFC’s Chief Development Officer Brian Cahoe.

The first of these new stores will likely open in the fall. They’re specifically designed to limit person-to-person contact both due to the pandemic and because that’s what customers are requesting.

The new stores will resemble current KFC restaurants, with the traditional red and white stripes and Colonel Sanders iconography. However, parking lot signage will direct cars to designated parking spots for picking up food from cubbies while other signage will send them to curbside pickup locations for online orders.

The new prototype is smaller than the company’s previous standard. The smallest format, at 1,300 square feet, does not offer on-premises dining but does have a drive-thru and carry-out.

As for pickup vs. drive-thru? “We think there’s a role for both,” Cahoe says. “The key is that choice, that flexibility, and it’s a big part of this going forward.”

Having just two pathways for customers also helps improve three key areas: overall operations, the team member experience and speed, Cahoe says. “The cubby system is one part of a digitally-integrated order-pay-pickup process for delivery drivers or mobile order customers that want to skip the line of the drive-thru. This skip-the-line process allows the team members to focus on one job and accurately secure orders placed on the cubby shelf. All of this happens before the customer or driver enters KFC, allowing the team to process orders when received, to keep the line flowing and reducing bottlenecks.”

The cubbies will not be temperature controlled. The packaging is what will keep the food hot. However, Cahoe did not rule out the possibility of heated cubbies down the line. There’s also the possibility in a future prototype iteration of cubbies being accessed from the outside, meaning customers never have to enter the restaurant.

The demand for contactless pickup is not going to go away post-pandemic, Cahoe says. 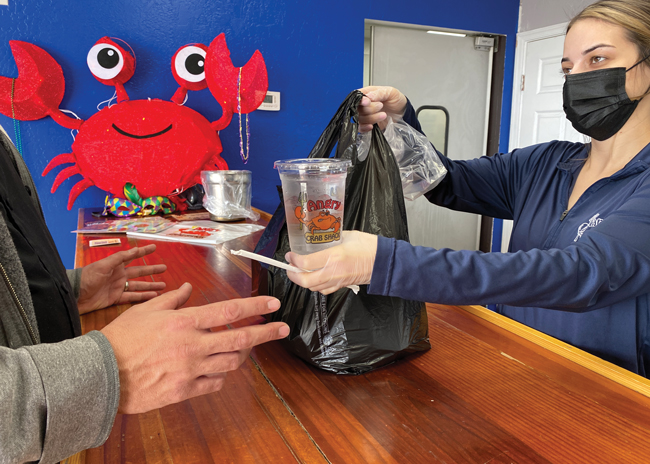 Before COVID-19 hit the U.S., Angry Crab Shack only offered very limited to-go orders and never used third-party delivery companies. But a year ago, out of necessity, the 13-unit concept started offering both “and found there was a good revenue stream for us, even with the dining rooms closed,” says President Andy Diamond. “It got us thinking that we’ll keep both in the future, and so what can we do to make sure it’s efficient because it takes up a lot of space.”

Diamond found a great solution at his Mesa, Ariz., location, where until recently the company housed a corporate office. But with a move to another building, this 500-square-foot space, on the backside of the restaurant, was up for grabs.

Diamond converted it to a pickup area; he knocked down one wall and added an 8-foot-wide garage door, to provide easy access and plenty of ventilation.

He recently added a counter and some shelves where the to-go orders are staged and repurposed an existing POS system. Besides this, he had to run lines for internet access to the location but says the biggest challenge “was administrative and getting the insurance company to understand how that space is now being used and getting approval for the work to be done.” This included writing an addendum to his lease. The biggest cost, and the most work, was adding the garage door, he says.

Diamond expects around 18% of Angry Crab Shack’s business to come through this pickup area, around 75% of it individuals and the remainder third-party delivery drivers. He expects it will continue to be busy post-pandemic, hovering around 10% of total sales. “It will make everything more efficient and more organized when we’re busy, because we’re separating the guests coming in to eat versus those coming in to pick up food. I think there will be demand; we can have waits of an hour, hour and a half, so this will help alleviate that.”

He wanted the pickup area to continue Angry Crab Shack’s branding. It was already painted in the brand’s colors with its trademark wooden floors and he’s adding decor “that keeps it in line with our brand. We want this to feel like an Angry Crab.”

Diamond did have to invest in to-go packaging. “We wanted the food to look and taste as if they were eating in the restaurant,” he explains. “With seafood boils, you run into the issue of overcooking while transporting since the steam is contained. We swapped traditional Styrofoam for containers with a perforated, clear top to stop the cooking process.” These new containers also keep fries crispy.

In other locations, where he hasn’t had the luxury of a space to convert, Diamond has closed down bar tops to use as pickup stations. He’s also closing down a booth near the hostess stand in some locations to use as a to-go station. “Having to go is certainly part of my thinking,” he says. “It’s nice for people picking up that they don’t have to stand in line with people waiting for tables.” 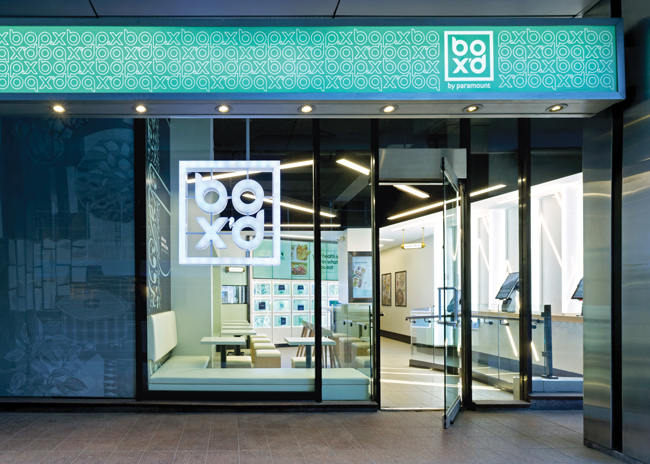 Box’d opened in downtown Toronto last summer but was in the works pre-pandemic, an endeavor from Paramount Fine Foods to provide to-go food without any lines in a busy area.

Inside, a bank of 18 cubbies separates the front of the house from the back for quick and easy pickup.

Customers order food from their device or from a kiosk in the store. Then they receive information telling them when it will be ready and which cubby their food will be in. Because customers pre-pay, they simply enter Box’d at the designated time, tap twice on a cubby to open it and remove their food.

Because the transactions are so fast, several people can pick up food at any time, says Paramount’s Director of Corporate Affairs Karalyn White. Paramount’s traditional restaurants can typically only serve around two people per minute, she says. Box’d, however, triples or quadruples customer throughput.

Box’d software was programmed to stagger the orders to make things safer during the pandemic, so everyone is not arriving at the same time to pick up food. It also staggers which cubbies are used so two customers aren’t accessing two adjacent cubbies, White explains.

Paramount purchased the Box’d cubbies but customized them with branded graphics. The cubbies are overseen at all times by a concierge who helps guests and sanitizes each cubby after use.

An important differentiating factor of the Box’d experience was creating a playful aesthetic in the front of the house, White says. Each cubby door features fun rotating images along with inspirational pictures and quotes.

There’s also some counter and booth seating, which was designed pre-pandemic “so people could have a quick bite but also watch and marvel at the cubbies and not be in the way of guests coming and going,” says White. It’s a very open, modern and light concept, she says, with pastel colors and quotes on the walls about bringing the world together through food. There are also three kiosks in the front of the house, to be expanded to five, when lockdown lifts.

The back of the house is pretty small given the volume Box’d will be able to do when it’s fully operational. The Mediterranean-inspired menu is all prepared in Paramount’s commissary kitchen and assembled in Box’d’s back of house. Orders come in on four digital screens and the line is mirrored, with two people able to work on each side, with one expeditor running food to the cubbies. The software automatically shuffles orders to send them to different staff members and staggers workloads.

Paramount plans to expand the Box’d concept, White says, and subsequent locations will likely be smaller. The downtown Toronto unit, at 1,100 square feet, will be the flagship; others will be closer to 350 square feet, she says.