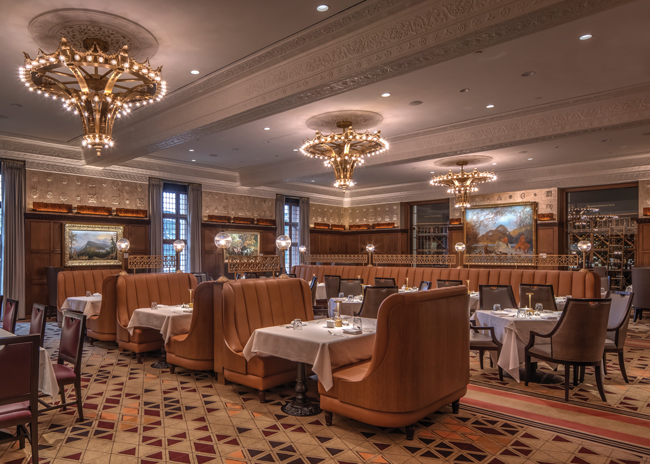 Since 1915, the Detroit Athletic Club has served the city’s movers and shakers from a neo-renaissance, Albert Kahn-designed building in the heart of the city’s sports and entertainment district. Over six floors, the iconic structure includes guest rooms and luxurious spaces in which members can exercise, relax, socialize and network. And, of course, where they can wine and dine.

For most of the 5-star private club’s history, dining happened in The Grill Room, a two-room restaurant on the ground floor, which, despite a minor cosmetic refresh in the 1990s, had become dated and out of step with changing member demographics. In late 2017, as part of a broader effort to update and remodel the club, management engaged Detroit-based McIntosh Poris Associates to help reimagine and modernize The Grill Room. The result, unveiled to members in fall 2019 and awarded a 2020 Interior Design Honor Award by AIA Michigan, is one restaurant, renamed The Gallery | The Fresco, designed to celebrate unique features of each of its main rooms while offering a cohesive experience.

“The restaurant is really the flagship of the club,” says Hassan Yazbek, director of food and beverage at the DAC. “But, over the years, the two sides of The Grill Room, which we simply referred to as the brick side and the carpet side, were being used very unevenly even though the same menu was served in both and the same support staff served both. The brick side, so called for its original tile floor, was more intimate and casual and was typically busier. The carpet side, a large, open space that early in the club’s history served as a billiards room, was more formal and increasingly underutilized. Our big objectives for the renovation were to create a more cohesive design, improve the ambience on the carpet side and enhance overall functionality. We’re very happy with the results.” 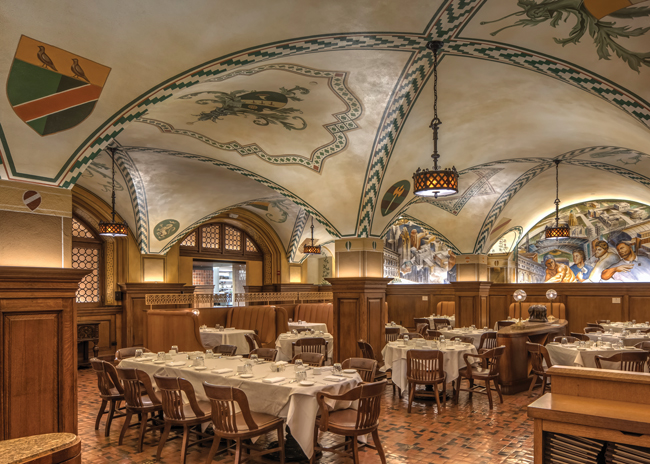 With no inclination or budget to change the configuration of the two spaces, McIntosh Poris Associates worked to enhance and celebrate each space by working with existing elements while adding design and functionality interventions to create the rebranded The Gallery | The Fresco concept. The Fresco (the brick side), in particular, had existing architectural and design elements worthy of preservation and enhancement. These include vaulted, frescoed plaster ceilings (the inspiration for the room’s new name), original oak millwork, locally handcrafted ceramic tile flooring, and two wall murals painted in 1999 by renowned local artist Hubert Massey. 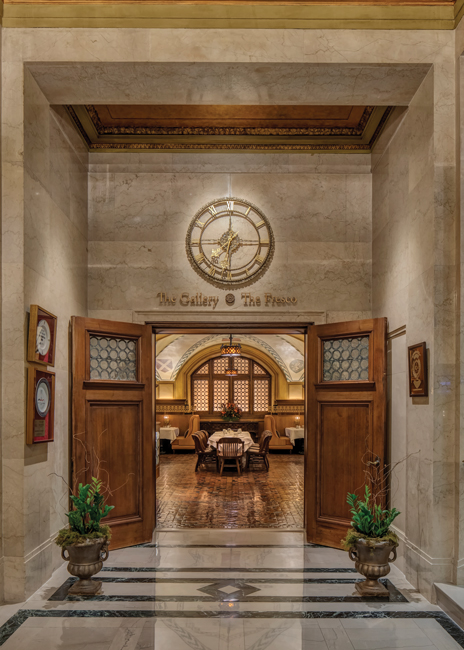 The DAC’s recently renovated flagship restaurant, The Gallery | The Fresco, is designed to offer a cohesive experience across two unique sections. Image by Justin MaconochieFunctional solutions were also added to The Fresco side, including upgraded service stations and a new host stand. “Guests enter the restaurant through The Fresco, and we wanted to improve that entry area,” Michael Poris, AIA, principal at McIntosh Poris Associates. “There had been just a freestanding maître’ d station, so we designed a new desk-style area that’s better suited to receiving people. It matches the woodwork in the room, but also incorporates 100-year-old bottle glass, which we found from the original building. We also used some of that glass in panels in a wall that we added to separate The Fresco’s seating area from the kitchen. It adds to the sensory experience in the room and the new wall, which servers now walk behind to access the kitchen, improves the guest experience by minimizing views into the kitchen and providing an acoustical barrier.”

Unlike The Fresco, The Gallery (the old carpet side) had fewer interesting existing elements with which to work, requiring a heavier redesign. Beyond its original oak woodwork, which was cleaned and re-stained, the only real aesthetic draw in the room was its collection of original 19th-century paintings. Those paintings, on permanent loan from club-member families, became the inspiration for rebranding the area The Gallery.

Accessed through two arched openings on the west wall of The Fresco, or from the separate Taproom bar at its front end, The Gallery was transformed during the renovation from what had been a one-dimensional, poorly lit open space with a sea of tables into a glowing, richly layered, fine-dining experience. While initial discussions included opening up the adjacent bar into the dining room, the idea was ultimately scrapped. “That consideration delayed the project by almost year, as members and management debated the pros and cons of doing so,” Poris notes. “We weren’t in favor of it, mostly because we didn’t feel that creating an open restaurant/bar space matched the level of fine dining experience they wanted.”

Within The Gallery, efficiency and flow were enhanced thanks to the addition of two oak credenzas with built-in storage for service items. Among the most impactful changes to the room was reimagined seating. Poris’ team focused on creating multiple seating bays for a more intimate, modern restaurant-style experience. At the front end of the room, a row of loose tables and custom wingback chairs now provides flexibility for serving larger groups. Those tables are bookended by the bar wall on one side and a row of booths on the dining room side, which helps to divide the space. “There’s a visual connection through the booths to the center of the room, but you have to physically walk around them, so they create separation,” Poris notes. 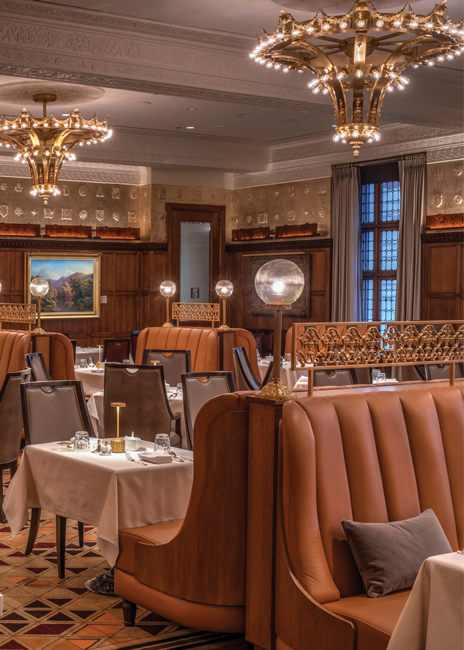 Lamps built into luxurious leather booth and banquette backs add period-style ambient lighting, while metal grillwork panels provide additional separation. Image by Justin MaconochieAn additional row of loose tables and chairs runs down the center of the space, flanked on the opposite side by a double-sided banquette. Along the room’s back wall, which opens to a wine cellar, an internally lit, custom quartzite “cellar” table seats eight. On either side of that table, two corner rounds provide more privacy.

“The goal was to create both flexibility and a sense of intimacy, which was lacking in The Gallery space before,” Poris says. “We tried to do that in part by dividing up the space and using a variety of seating styles. The cellar table adds another experiential element to the room. It’s really beautiful and is used for multiple purposes, from wine tastings and chef demos to just being a nice spot where guests who don’t want a full-blown dinner can enjoy a glass of wine and a snack.”

Still the “carpet side” of the restaurant, The Gallery’s new custom carpet was designed to visually connect the room to The Fresco by incorporating the color palette and pattern of The Fresco’s floor tiles. “Even though you’re going from tile to carpet between the rooms, the color and pattern are similar,” Poris says. “We didn’t copy the look of the tile, per se, but there’s a relationship and scale so that it feels cohesive and continuous. We also used that carpet in a small, semi-private dining nook on The Fresco side called the chef’s table.”

The use of rich leather, natural oak woodwork and metal detailing in table bases (custom designed to evoke the club’s former billiards table bases), divider walls and light fixtures throughout also helps to create a cohesive design. Inspired by the luxurious finishes used in early automobiles produced in Detroit, the materials palette exudes both comfort and clubby, 1920s-style glamour. And the restaurant’s color palette is intentionally subdued. Says Poris, “It’s not a loud, colorful space. Rather, most of the color comes from the frescos, the murals and the paintings.” 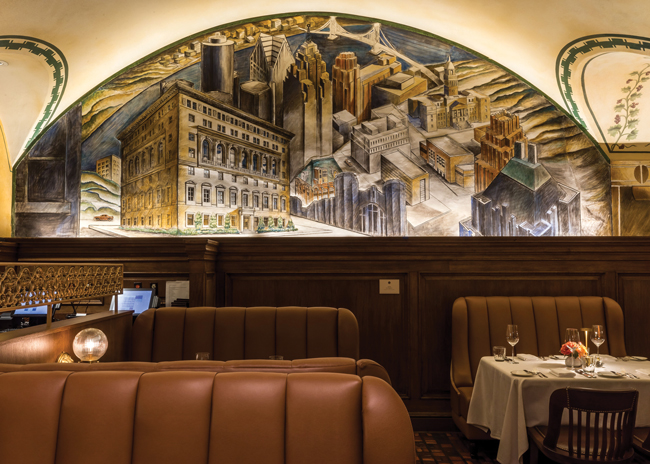 It’s those elements — historic and beautiful art in both sides of The Gallery | The Fresco — that the new renovation specifically spotlights, and it required a major lighting package redesign to do so. While always important, lighting in this particular project ultimately pulls everything together and enables the primary objectives of highlighting artwork and creating an intimate restaurant experience to be achieved. 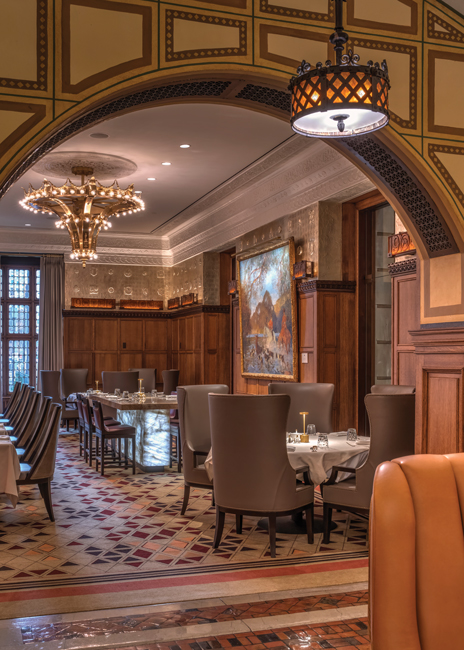 The Gallery was transformed during the renovation from what had been a one-dimensional, poorly lit open space with a sea of tables into a glowing, richly layered, fine-dining experience. Image by Justin MaconochieAs with furnishings and finishes, the design team took a multilayered approach to lighting, working with Michigan-based architectural lighting design specialist Illuminart to install energy-efficient, flexible task, ambient and feature lighting that can be easily and precisely controlled. Downlights, uplights, picture lights, fixed table lamps, chandeliers, and decorative lamps built into booth and banquette backs combine to create a balanced effect.

“The lighting in the restaurant had been done more than 20 years ago, and there have been so many improvements in the technology since then,” Poris says. “We really wanted to light the vaulted ceilings in The Fresco with a beautiful, diffused light and also to light the murals in that room, which previously weren’t lit at all. Nor were the paintings in The Gallery, which we’ve now illuminated with LED picture lights. Members have said it’s as though they’ve never really noticed these beautiful, 19th-century paintings before simply because they weren’t lit.”

Robert White, principal at Illuminart, says that while some existing wall-mounted lighting in the Gallery was retained most of the overall ambient and accent lighting was replaced. “In The Gallery, the entire ceiling was removed and we started fresh,” he says. “In The Fresco, some surface-mounted uplighting was already in place but it was halogen and had been in there for years. We took that out and installed uplighting on the columns and walls that’s hidden in the millwork detailing, enabling us to get a really nice effect on the arches. And they’re LED, which we used to replace all of the halogen and incandescent lamps throughout the restaurant. LED generates less heat, it’s is easier to maintain because the bulb life is so much longer, and the lighting quality is better.”

While much of the lighting throughout the restaurant is designed to provide a warm, luxurious glow and to highlight its unique artistic features, custom cast-bronze chandeliers add glamour and drama to The Gallery. The chandeliers also support the design team’s goal of creating intimacy in the large, open room. Beyond adding sparkle, they also help to visually divide the space into its three new seating bays, according to Poris.

“Lighting was so important in this project,” he adds. “The Fresco side always felt good, but now the frescoes and murals really shine and the room glows. And The Gallery, which previously was lit mostly with just downlights and was very flat, has been completely transformed thanks in large part to its multilayered lighting design.” 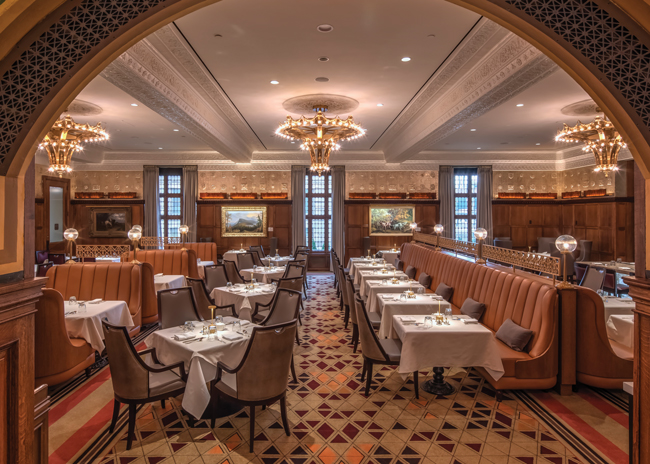 In The Gallery, custom-designed seating bays and chandeliers help to create separation and provide for intimacy in the large open room while new lighting highlights original 19th-century paintings. Image by Justin Maconochie