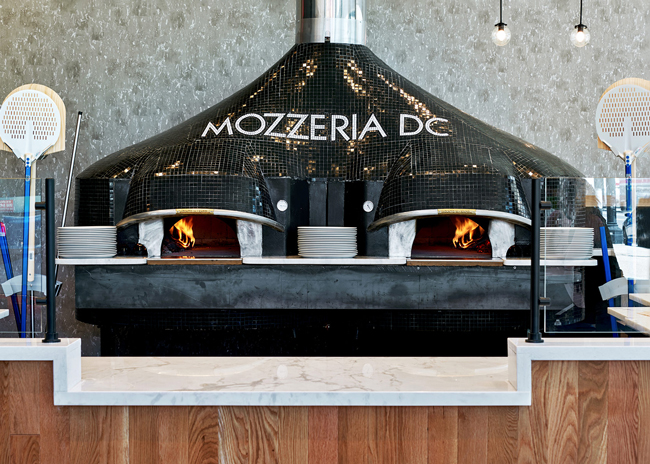 San Francisco-based Mozzeria opened its first location in 2011 as a certified Neapolitan pizzeria. More than that, though, it has served as a space that is welcoming and accommodating to deaf individuals as both employees and customers, making it a well-known spot in the global deaf community.

Mozzeria was founded by Melody and Russ Stein, graduates of Gallaudet University, the nation’s premier university for the deaf and hard of hearing. The company, which is now led by CEO Ryan Malisewski, recently opened Mozzeria’s second location in Washington, D.C., not far from Gallaudet. Core Architecture + Design created the prototype for the full-service casual-dining operation.

The heart of the design, and in fact the entire operation, is Mozzeria’s wood-burning pizza oven. In addition to the drama of having a live fire, this piece stands out through the chain’s logo, which has been added to the unit through a tile mosaic. Guests can see this oven work from several locations in the restaurant, with the best view coming from bar stools that can be placed at the front of the station.

According to Joe Messier, Project Architect at CORE, the flow of work in this area is designed with deaf/hard of hearing employees in mind. It is set up with two sections, each with its own make line and cooking chamber, staffers essentially work in circles, stretching the dough at the front of the station, topping the pizza on the sides then placing the pizza in the oven for 90 seconds. 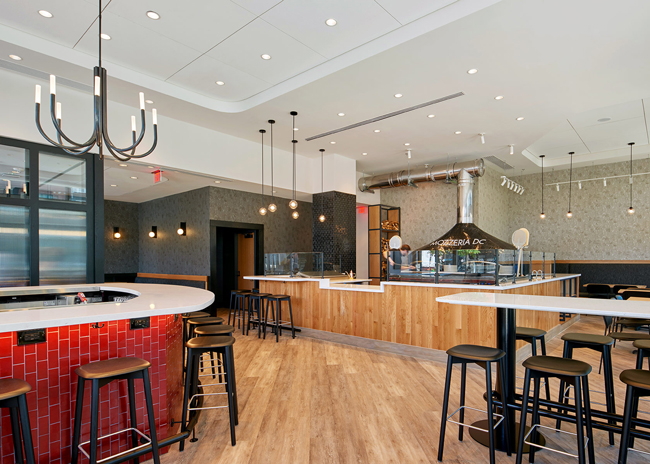 Since visual communication is essential to the deaf and hard of hearing community, in those spots when staffers may need to interact, such as at the oven itself, they are within each other's 180-degree field of vision. What’s more, while at the oven they have a clear sightline to the back-of-the-house kitchen, allowing them to communicate with co-workers when they need more dough or to be restocked on a topping.

“It is important for those two spaces to be visually connected, the pizza makers and the rest of the cooking line in the back. That's the cool thing about American sign language is that you can communicate over much longer distances. You don't have to yell, you can just sign,” says Messier. 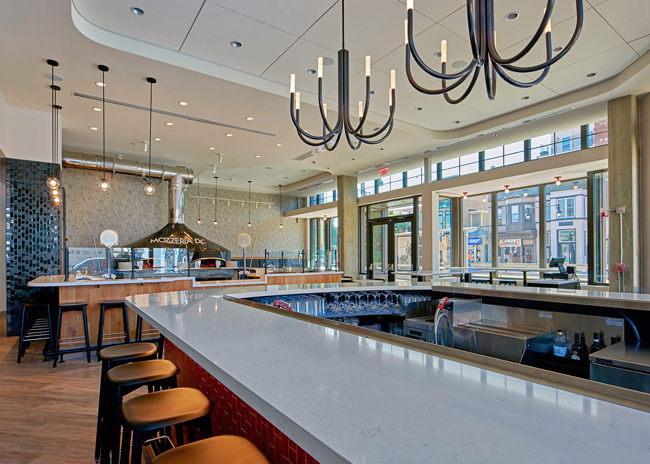 Sightlines naturally play a big role in the design of the restaurant’s dining area as well.

The restaurant, for instance, has a U-shape bar, a “critical” design element, says Messier. The curve, he says, allows parties of three or four to communicate with sign language without having to contort themselves in order to be seen. What’s more, this shape helps create a true bar environment.

“The bar is typically a very social area. You get to hear little snippets of conversation going on, you might meet someone brand new. To help facilitate that in an environment where we have guests who are speaking and using American Sign Language, you want to have that visual communication across the bar.”

While the space’s function is key, so is its form. The bar face features red subway tile laid vertically along with a solid surface top that matches the granite used at the pizza-making station. The chandeliers, meanwhile, are minimalist but compelling — a key principal behind the space’s design, says Messier. 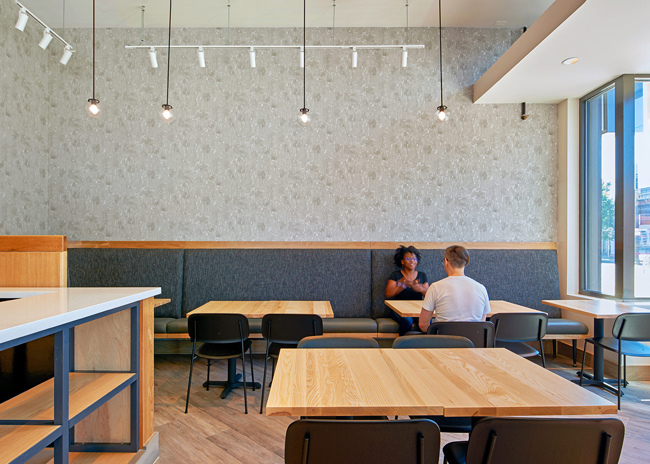 In some cases, though, the goal of the design was not to open up sightlines, but to break them up. Deaf and hard of hearing guests have a right to private conversations, as well as to not be distracted by a sign language conversation happening across the room, notes Messier. To that end, this new Mozzeria location has different levels of seating, which provides natural breaks in lines of site.

One such break is the transition from the bar area with high-top seating to the dining area with standard-height seating.

The design of this space is meant to help facilitate sign language conversations while still being visually compelling.

The pendant lights feature fishbowl fixtures that spotlight guests’ faces and hands, not just the food on the table. Backgrounds in this area are designed not to distract. The banquette features a high back while the vinyl wall covering is calm.

What the backgrounds are not, though, is boring. After all, members of the deaf and hard of hearing community can be very attentive to visual design and style, says Messier.

“As you get closer to that wall covering, it's pretty dynamic in terms of the way parts of it reflect the light.  Depending on the time of day, depending on the season, it's going to look a little bit different. That was another important thing that came out of the conversations with the Mozzeria team. Don't think it has to be bland. It still needs to be visually inviting and enticing.” 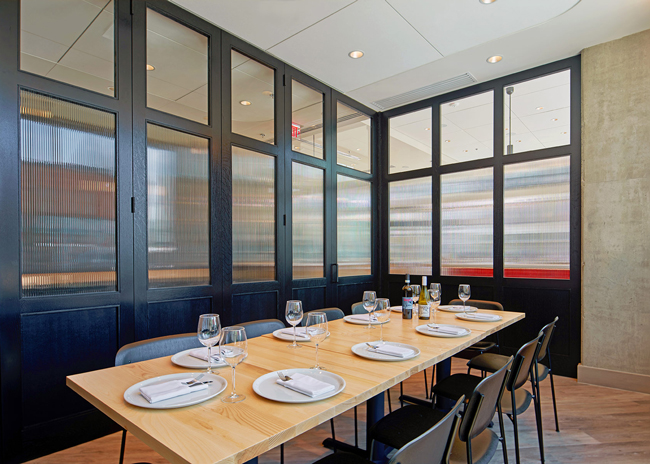 In addition to bar and dining spaces, Mozzeria’s DC location offers a private dining area. Fluted glass windows on the doors provide a connection with the rest of the restaurant while offering visual privacy to guests conversing in sign language.

When not being used for private gatherings, these doors can be opened, creating extra general seating. To blend the spaces, tables and chairs in this area match what’s found in the rest of the operation.

“Knowing that this is their first prototype and it is very close to Gallaudet, they do think they will be using this quite frequently as a private dining room, but we wanted to give this flexibility so it could serve as a dining area and not feel like it is a second-tier of the dining experience,” Messier says.