Ancient architects laid the hearthstone first, then built the home or inn around the fireplace, the central nexus for heating and cooking. Today, the scent and savor of wood-grilled foods continue to exert a primeval appeal, and a growing number of restaurants now make live-fire hearths the heart of their concepts.

The demand for authentic Neapolitan-style pizza has fueled installation of wood-fired brick ovens in trattorias and other casual concepts around the U.S. And a growing cadre of chef-driven restaurants takes the hot concept a step further, using wood-fired grills and hearths to prepare nearly their entire menus.

These are not backyard hibachis but rather top-quality commercial equipment designed for the rigors of hard restaurant use. And they’re not only central to the menu but are the focus of these operations’ brand essence and design aesthetic. 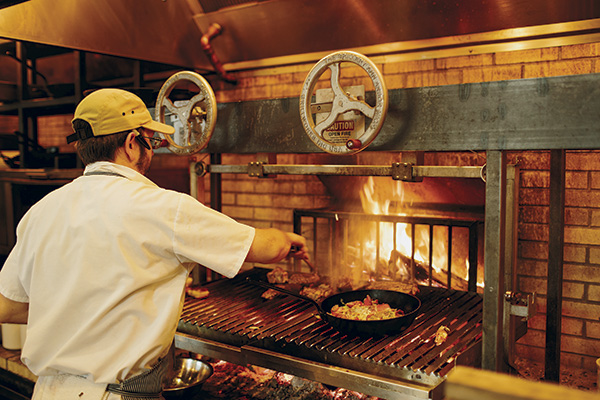 The focal point of King + Duke’s interior is the hearth where a large center grill sits below a smoker box. On either side is a smaller wood-burning grill with cooking surfaces that can be raised or lowered. Photo by Andrew Thomas Lee“The flavor you get from cooking over live fire is unparalleled,” says EJ Hodgkinson, executive chef at King + Duke in Atlanta, Ga. “It speaks to something nostalgic in its flavor profile and harkens back to your first barbecue with the family when you smell all the charcoal-y smoke in the air.”

Named after characters in Mark Twain’s The Adventures of Huckleberry Finn, King + Duke is one of chef Ford Fry’s seven Atlanta-area restaurant concepts. Much of the restaurant’s menu of locally sourced ingredients is cooked on a battery of three wood-fueled grills set in a 24-foot hearth.

The smell of wood smoke lures guests from the parking lot, and when they walk in the front door they have a clear line of sight to the open hearth blazing in the middle of the dining room. From their seats, guests can watch the cooks working the grills. “The hearth is the focal point and the heart of the restaurant,” says Hodgkinson.

At the restaurant’s Chef’s Counter, where four coveted seats reside almost directly in front of the fire, guests can watch the action and eat dishes hot off the grill. “It’s the warmest place in the restaurant, but not oppressively hot,” says Hodgkinson. An efficient air return system keeps the restaurant comfortable despite the “24 feet of inferno happening.” 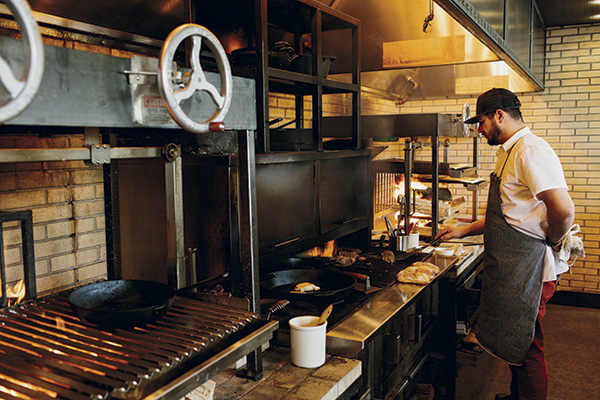 Photo by Andrew Thomas LeeKing + Duke features a 6-foot center grill sandwiched by a pair of 4-foot grills. On the two side grills, the firebed is at waist level with grills suspended above. The culinary team can use cast aluminum crank wheels to adjust the height of the cooking surface. The center grill is fed from below; its interior is lined with firebricks, which creates an immense amount of directed heat. Over the top of the grill sits a custom-built smoke box.

“That’s the way we finish a lot of our proteins, so they get that final touch of smoke before they go out to the guest,” notes Hodgkinson.

For safety and efficiency, firebricks line the entire hearth. Cementing the bricks in place, a softer mortar allows bricks to expand and contract with changing levels of heat. An initial hitch was that the bricks expanded so much that they were pushing each other out of alignment; the design was tweaked to give the firebricks more room. The restaurant burns though 13 cords of wood a week, which it stores near the loading dock. Staff bring up the wood in large tubs via an elevator as necessary during service.

The custom-designed overhead exhaust hood operates 24 hours a day. “It’s really cool and sounds like a jet engine; you can hear the power,” says Hodgkinson. That’s not noticeable during dining service, he says, thanks to music and ambient noise.

The hood includes a built-in fire-suppression system and, for cooking concerns, a custom alarm system that alerts cooks when the temperature of the grill rises more than 20 degrees in a span of five minutes.

Culinary staff cook all the entrées, including delicate fish such as flounder, and many side dishes over the hearth. A signature is The King, a 35-ounce USDA Prime bone-in ribeye grilled to order and served with smoked and grilled bone marrow, bordelaise sauce and grilled bread for mopping up the flavorful juices.

Installation, equipment, safety systems, fuel and training costs for such intensive live-fire cooking all add up, of course. “The payback,” says Hodgkinson, “is simply that there is not another restaurant like ours. If diners want this type of cookery, we are that restaurant. Along with a massive wine library, it makes us unique and special and a great place to visit.” 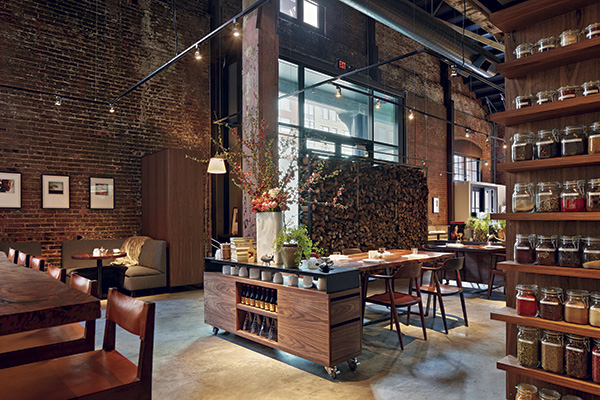 Saison’s dining room is designed to afford every seat in the house a good view of the large, open kitchen and wood-burning hearth. A wall of cut wood greets guests in the vestibule, setting the tone for the experience ahead. Photo by Bruce DamonteChildhood memories of hunting and fishing trips and cooking over the campfire are said to have inspired the culinary techniques of Joshua Skenes, chef and co-owner of Saison in San Francisco, Calif. Saison’s logo features a flame dotting the i, an indication of the importance of live-fire cooking at the three-star Michelin restaurant. Nearly every dish at Saison contains something that was smoked, grilled or roasted by a wood fire, including smoked ice cream.

“The chef is focused on simplicity, and fire is one of the simplest methods of cooking. That’s why he chose that as a major theme for Saison,” says Jiun Ho, principal of Jiun Ho Inc., who designed the restaurant.

An 8-foot-high, 20-foot-long wall of firewood at the restaurant’s entrance announces the theme and creates a foyer. “It’s a warm and cozy welcome that creates a sense of arrival for the guests and helps them understand the main ingredient,” Ho says.

Saison resides in the historic California Electric Light Company Building, dating to 1888, with 40-foot ceilings, exposed wooden beams and brick walls. “One of the challenges was how to divide up this space without closing it down,” says Ho. The woodpile is one such divider, and also a stockpile of fuel for the wood-burning hearth. 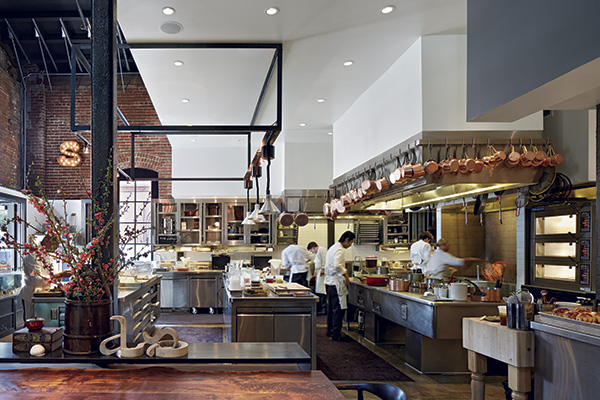 The star of Saison’s kitchen is a custom-built hearth set along the back wall of the open kitchen. Within it sits a wood-fueled stove next to a wood-fired oven, along with perforated pans and metal hooks above for smoking. Photo by Bruce Damonte“One of the requirements for the restaurant was that the kitchen be like a stage,” he adds. The kitchen takes up a full one-third of the long and narrow space — and ate up more than half of the budget. Large and open, it’s mostly white, bright and airy; in contrast, the dining room has a darker, sexy, cozy ambience. Another requirement was that every seat in the restaurant has a view of the kitchen and the culinary drama. “That’s one of the most important design features — or challenges, depending on how you look at it,” Ho says.

The star of this open kitchen, the custom-built, wood-burning hearth measures 11 feet long and about 5 feet deep. It’s set against the back wall because of safety concerns and fire regulations, such as accommodating the fire-suppression system.

Within it sits a wood-fueled stove next to a wood-fired oven, along with perforated pans and metal hooks above for smoking. The construction is similar to a standard wood-burning fireplace, made of prefabricated fire bricks with plenty of insulation surrounding it as well as an insulated chimney.

In the dining room, the earthiness of the brick and exposed wood beams contrast with velvet upholstery on the banquette seating. The seating challenge was addressed via large tables with decorative dividers that slide to convert, for example, two four-tops into a six-top and a deuce. Walnut slab tabletops visually and tactually reinforce the theme of wood and fire. For Ho, “It’s like a theater, with all the movement going on in the kitchen, a performance.” 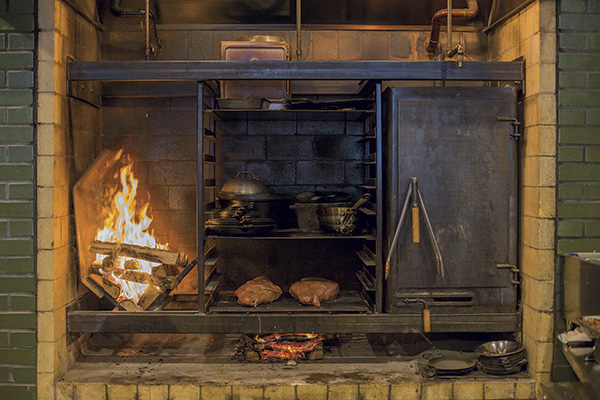 Público’s hearth, visible from every seat, is 4 feet deep, 7 feet wide and 7 feet tall. It is bricked and clad on the inside in fire-retentive stone and contains a grill, an area for hearth cooking, rotisserie spit and wood-fired oven that doubles as a smoker. Photo by Monica Mileur“I love cooking with wood; it is so versatile. You can cook slow or fast, smoke foods at 225 degrees F, or stoke up the fire to 600 degrees F to 700 degrees F to quickly sear,” says Mike Randolph, chef-owner of Randolph Restaurants in St. Louis, Mo. Randolph is no newcomer to cooking with live fire. His three restaurants include The Good Pie, which turns out Neapolitan-style pizzas from a wood-fired pizza oven. But at the recently opened Público, the chef shows off what live fire can do with an extensive A la Parrilla (Spanish for “from the grill”) menu.

At Público, which measures just 2,000 square feet, the hearth becomes the focus of the open kitchen where it takes up an entire wall. “You can see the fire from pretty much every seat in the restaurant,” notes Randolph.

The set-up was entirely custom made. The hearth measures 4 feet deep by 7 feet wide and 7 feet tall, bricked and clad on the inside in fire-retentive stone. Within the hearth is a grill, an area for hearth cooking, a rotisserie spit and a wood-fired oven that doubles as a smoker.

Randolph and his team worked with the local municipality to meet specific safety regulations. That included installing a high-efficiency ventilation system, which self-cleans every eight hours and which can be monitored via the internet. The hood has virtually eliminated smoke and cooking odors in the dining room. “When you walk into the restaurant there is a faint woodsy smell, but guests don’t leave feeling or smelling like they’ve been huddling around a campfire,” says Randolph.

He concedes that working with live fire does pose a few challenges: in particular, manipulating the hearth to produce the restaurant’s diverse menu — items cooking at different temperatures and times. “It takes forethought and a lot of work because there are more variables in play,” says the chef. “But the flavors we get outweigh those difficulties.”

Slow-cooked pork, for example, is finished on the grill for a smoky caramelized crust. Head-on Gulf prawns get the wood-fired grill treatment as do lamb hearts and a hanger steak with anchovy and lime butter. Público’s signature is a version of Mexico City street food — Tacos al Pastor, the tender meat which is sliced from the rotisserie spit.

“People ask me if wood-fire cooking is just a gimmick,” says Randolph, about the merits of his hearth. “I say to them, go home and turn on your gas stove, see what it smells like. Then go out in your backyard and start a wood fire. I think that answers the question.”