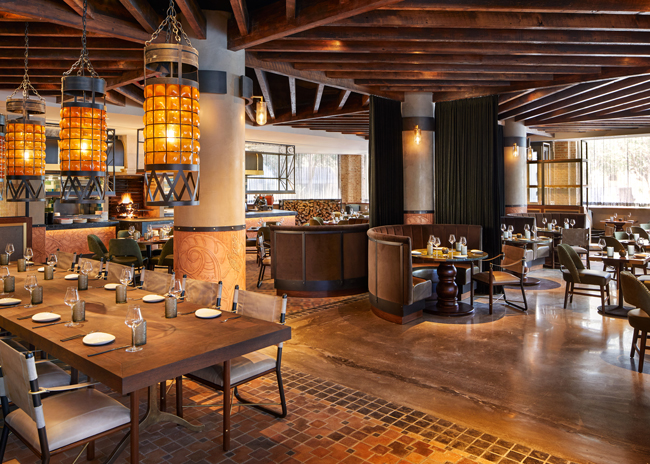 Though it was once an early jewel in Conrad Hilton’s empire, the Plaza Hotel in El Paso was shuttered for decades until mid-June of this year.

That’s when the hotel, renovated by El Paso billionaire Paul Foster, reopened its doors with an upscale design meant to blend the old and the new.

This redesign effort was handled by Cooper Carry’s Hospitality Studio and The Johnson Studio at Cooper Carry.

“We wanted to celebrate the history and bring it back as a vibrant hotel that is the centerpiece of downtown, but to do so in a modern way that felt relevant today, not like a stodgy museum. Balancing the historical with the current was really important,” says Anna McGrady Miller, director of interior design for The Johnson Studio at Cooper Carry.

Part of matching the hotel to modern tastes was moving its main restaurant and bar, an upscale Mexican operation dubbed Ámbar Restaurante, to a more prominent space in the building.

“The bar was originally the front desk reception area,” says Miller. “Because of the preferences of the modern traveler and diner, food and beverage has become the center point of the hotel. Instead of the reception area, we made this the bar and gathering place.”

Blending the old and new in Ámbar went well beyond the restaurant’s location, though. Many legacy design elements were retained, including the ceiling color and beams, along with the chandeliers. To blend with those pieces, new elements focused on amber and rust tones.

The clearest example of these tones is the highlight of the space, the two-story backbar made of stainless steel and amber-tinted glass, dubbed the tequila tower. Stairs behind the tower lead down to a private dining room or up to the mezzanine-level balcony, as well as to the bar’s top-shelf spirits.

“It's really great theater. If you request top-shelf tequila, the bartender leaves and goes up the stairs and up a ladder and brings it down. It serves a dual purpose in that way,” says Miller.

While the scale of the bar is meant to impress other elements help bring it down to earth. Custom lighting on the tables and bar helps create intimate spaces and allows the operator to adjust the mood of the space for evening guests. 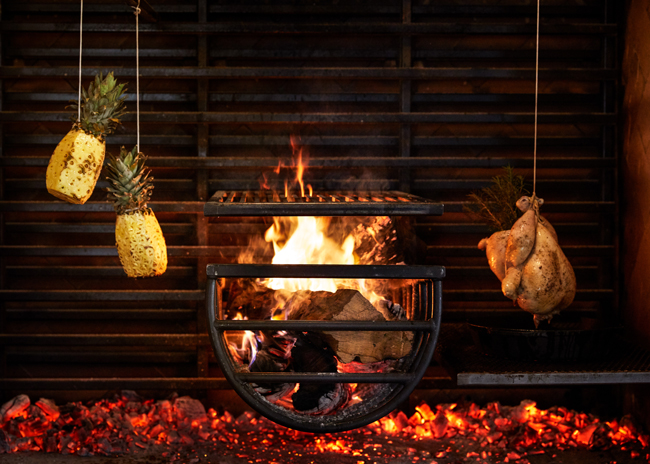 Guests who want more than a drink and bar bites can find something more substantial in Ámbar’s dining room. The centerpiece here is the open kitchen with a wood-burning hearth, used to cook steaks, seafood, poultry and even large fruits and vegetables, such as pineapple and whole cauliflower heads.

While this is a professional space, the kitchen’s design is meant to feel more residential. Instead of stainless steel and white walls, the area is filled with green tile, brass claddings and an over shelf in black metal.

“We really imagined this as a hearth area, for it to feel very residential. The chef could be back there cooking a meal for you and it feels very intimate,” Miller says.

As an upscale operation, the dining room features some luxurious elements, including leather chairs and plush upholstered booths. The space also has nods to the hotel’s exterior flourishes, with design patterns from the exterior now stamped into leather pieces wrapped around structural columns. 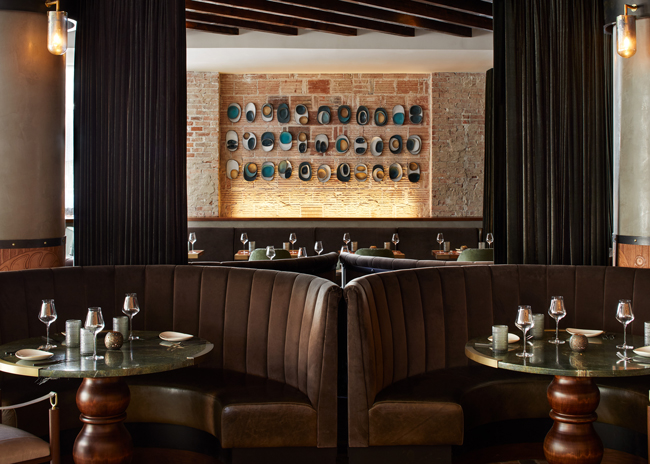 The dining room, though, isn’t polished to a shine. This area was previously home to different retail operations. Instead of tearing out the flooring and making the space uniform, the designers simply added stained concrete where needed.

“The booths and the chairs all are more upscale materials, but then we bring it down a notch and make it more rugged and appropriate for this West Texas feel, with the concrete floor and reclaimed wood beams [overhead]. There’s a constant balance showing the high materials with the lower, rugged materials,” says Miller. 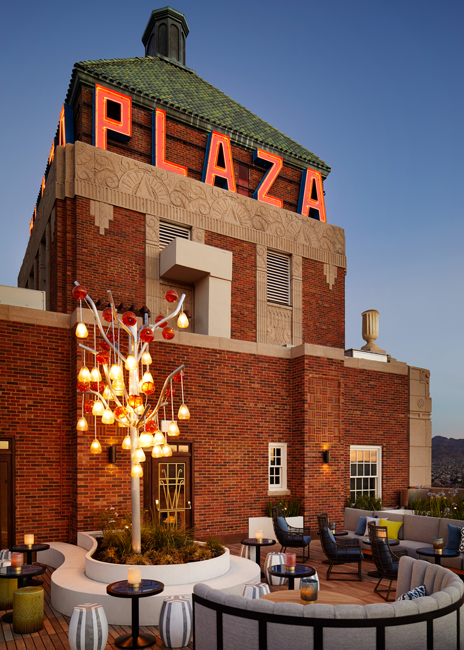 In addition to Ámbar, the designers also oversaw the creation of a rooftop terrace bar, La Perla, set to open this fall. In contrast to the masculine interior, this space is designed with a more feminine feel, including softer materials and more curved elements.

Highlights of La Perla include an indoor/outdoor bar and a metallic tree with lights hanging from its branches.

While this piece serves as a conversation starter, it was born of necessity. Since the hotel is a historic building, the designers couldn’t install lights that would be visible from the street.

“This is a real artisan piece that feels like a tree all covered in these glowing globes,” Miller says. “In the evening it provides some nice ambiance and lighting for the space without bringing in any overhead lights that would detract from the building at sidewalk level.”