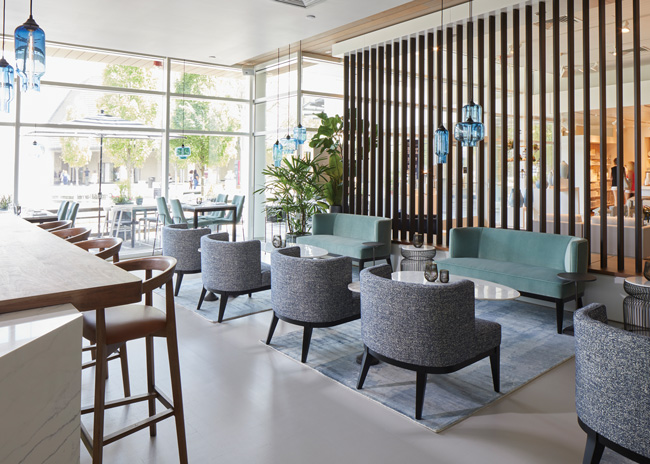 While some retail storefronts shutter, others are branching out and creating destinations for shoppers. Some are even turning shoppers into diners. Increasingly, customers can take a break from shopping, stop to refuel, or even browse the aisles with a drink in hand. 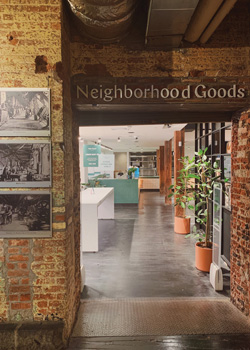 The design was dictated largely by the former restaurant that occupied the spot. “It’s quite a shotgun layout,” Dukowitz says. “We were guided by a lot of the equipment that was there and we minimized the equipment in the kitchen space. We worked from rush hour backwards to figure out how we’d deal with peak traffic.” The flow was really important, she says, as she expected most guests to pass through during the day but wanted to allow for lingering in the evening or between meals.

Guests can enter Tiny Feast from within Chelsea Market or from within Neighborhood Goods. However, the cafe has longer hours than the store.

The goal of this space was to have it feel like a little secret, tucked away inside the store, Dukowitz says. To that end, the exterior signage is understated. She lowered the ceilings inside by about two and a half feet, “so there’s a change in the lighting and mood compared to the retail area, creating a more inclusive setting,” Dukowitz says. “You could walk past without noticing it from within Chelsea Market. We want there to be discovery.”

And she’s given the space a cohesiveness with light tiles and dark grout throughout, which also makes the goods, which are merchandised via insets set in the wall tiles “pop off the shelf,” she says, which is the same way items are merchandised in the store.

The lighting strategy, she explains, “was to really highlight the food and specific materials that will create a buzzy yet low-key atmosphere — lighting controls allow us to set the vibes throughout the day.”

Guests that enter the cafe from Chelsea Market first encounter the bar, which runs all the way to the back wall. This, Dukowitz says, constitutes half the footprint of Tiny Feast and is made of a dark green polished recycled plastic material called Durat, which, she says, “has a very theatrical feel to it.” Guests order at the front, just a few steps inside, and walk along the length of the L-shaped bar to pick up their order. At the end of it is the entrance into the store — movable planters and partitions separate the space. Dukowitz used partitions reminiscent of existing factory windows that were in the space, which also serve as an additional counter to eat or drink at. At night the bar is more static, as guests tend to sit and linger.

The entire space is designed like a horseshoe, with multiple points to transition into the retail area or keep exclusively a cafe experience. “During rush hour, we suspect it will flow that way, while off/after hours will spread and become social and organic,” Dukowitz says.

Images courtesy of The Table at Crate

The Table at Crate

For die-hard fans of Crate & Barrel as well as those who just like to enjoy a meal in pleasant surroundings, The Table at Crate opened within Crate & Barrel in Oak Brook, Ill., last summer. It was the retailer’s first full-service restaurant.

The restaurant’s goals were trifold: to reflect the retailer’s aesthetic, to welcome guests for anything from lunch to tea to dinner and to have the restaurant’s design be suitable for every time of day.

“We wanted the space to be tactile and multidimensional,” says Crate & Barrel’s Brand Experience Manager Celeste Sisson. “The different textures allow for flexibility in the mood of the space, depending on the light and the time of day.”

Layering was an important part of the restaurant transitioning through the day, Sisson explains. “Layering different textures as well as including various upholstery and rug components are the key to seamlessly transforming the space from day to night. During the day, these elements can feel easy and casual, like your favorite sunny corner of your home. In the evening, that same area can feel sexy and inviting in a different way, thanks to candlelit tables that set the tone for an evening experience.”

It was also important not to wander too far from the Crate & Barrel aesthetic, so the design team stuck to clean lines, warm tones, “and of course included elements of lightheartedness that brighten up the space,” Sisson adds. “We prioritized staying attainable, while at the same time, offering inspiration in design, experience and ambiance.”

The Table at Crate is 5,300 square feet, and the overall design is modern, yet with elements that surprise and delight the guest. An example of this is in the full wall permanent art installation, showing more than 100 pieces of classic Crate & Barrel dinnerware. This, says Sisson, “is a joyful expression of the origin and core inspiration of our brand. This piece of art is also a nod to our mantra of creating beautiful design for everyday living. It takes a familiar and recognizable design and turns it on its head so customers can view it from another perspective.”

The restaurant emphasizes curving lines and finishes ranging from brass to leather, soft green velvet and textured navy upholstery, light woods and a soft color palette accented by the retailer’s signature black and white. This is all contrasted with materials like dark walnut, white quartzite, and gray sculptural tile.

The Crate & Barrel aesthetic extends outside. “We wanted our outdoor area to reflect that bold yet friendly and attainable attitude, while also mixing the crispness of the black and white striped umbrellas with the texture of stone and upholstery,” Sisson points out. 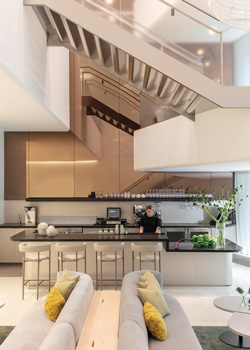 Image courtesy of Floto + WarnerBroadway Bar in the new Nordstrom flagship store in New York is an elegant, modern lounge with beautiful finishes. Spread over two levels, the bar is designed to provide various views and experiences.

Broadway Bar is just steps away from the merchandise on the third floor of this department store. On its left is a long bar, with a dark honed brownstone granite top. This is backed by a 30-foot-high bronze mirror that runs the length of it, “and adds a very warm moment in a white and lofty store,” says Robert Passov, design director, Rafael de Cárdenas, New York. “Everything basks in the glow of the mirror and it reflects the entire lounge.”

The remainder of the space is made up of beige-gray velvet sofas with yellow accents (some chairs, cushions, flowers). The sofas backing the sales floor of the store have half backs, “to suggest a barricade, but so you can shop and feel part of the lounge and vice versa,” Passov says. The fabrics, he points out, “took a cue from the bronze mirror and were a departure from the rest of the white box store; we were trying to make it a dynamic yet calming environment.”

A lighting sculpture by Kendall Buster hangs from the ceiling of the fourth floor, which allows guests to contemplate it from there, from the third floor, or from a mezzanine floor between the two, which is also part of the lounge and features clusters of tables and chairs that are more intimate than the open space below. “This work animates the soaring vertical axis and creates a compelling draw for visitors at every level of the space,” says Passov. This artwork was commissioned, and the goal was an ephemeral piece that wouldn’t interrupt the view, he says.

All tables in Broadway Bar are low, either coffee table height or slightly higher, since most of the business here is drinks, though food can be ordered from the six other concepts within the department store. The tables are made from anodized aluminum and are in a teardrop shape so they can kiss together to form a larger section or remain separate. All furniture, except the bar stools, was custom designed by Rafael de Cárdenas, “with an eye to stimulating material and color palettes,” Passov says.

Passov wanted the bar to feel more residential than commercial. “It’s meant to integrate with the hustle and bustle and to emphasize the spectacular scale of the flagship but also be reclusive and offer a moment of respite and intimacy. Customers are just hanging out there for a bit then going back to what they were doing before.” However, he also aimed to have this be a destination bar. “We feel it offers enough unique design that would make you come from outside.”