Retractable Roofs Dazzle, Whatever The Weather 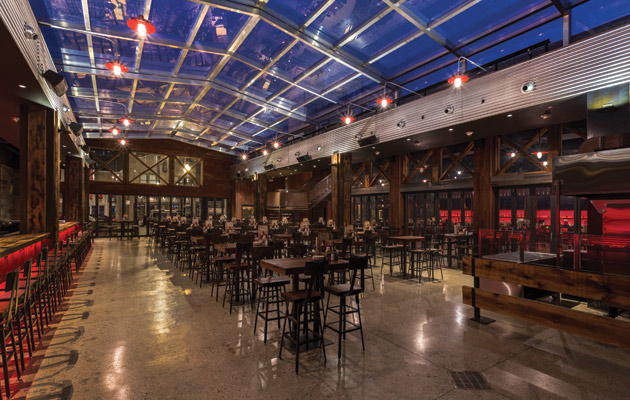 When the developers of Andaz San Diego were looking to rebrand the hotel's rooftop restaurant and lounge as RoofTop600, their goal was to create a space that offers guests a unique and intimate atmosphere for breakfast, lunch and dinner. The company wanted to capitalize on its already popular rooftop restaurant in the city's Gaslamp Quarter — the largest rooftop space in San Diego — and to create a space it could use rain or shine.

With approval from the San Diego Historical Society, Andaz San Diego's developers opted to install a retractable roof that gives diners a full view of the San Diego skyline, the Coronado Bridge and Petco Park. The automated roof installation was included in the first phase of a $1 million restyling project and took more than 4 months to complete, according to Chris Wingerberg, director of sales and marketing for Andaz San Diego.

The roof was installed in January 2013 with the overall rebrand completed in June. So far, the project continues to deliver on its promise of treating restaurant diners to the best views San Diego has to offer — regardless of the weather. "We've always used the space, but the roof gives us more flexibility, especially in inclement weather," Wingerberg says. "When the weather doesn't want to cooperate, we can close the rooftop and still have an indoor/outdoor dining experience. Guests have loved how, even with the roof closed, they can still enjoy the views."

Views represent one reason why restaurant operators see retractable roofs as a way to enhance the dining experience. 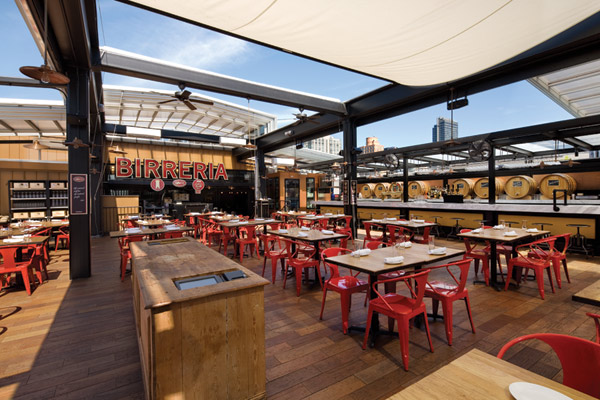 Nestled almost at the corner of West 23rd Street and Fifth Avenue in New York City is Birreria, Eataly's 4,500-square-foot rooftop restaurant and brewery, which offers stunning views of 3 iconic downtown buildings. Birreria is known as Eataly's beer garden, a place where locals and tourists alike drink house-brewed ales while noshing on a variety of formaggi, salumi and insalata. The rooftop, considered the building's 15th floor, provides eye-level views of the clock tower at Madison Square Garden and the city's iconic Empire State and Flatiron buildings. Thanks to a paneled retractable roof built into the restaurant's original design, Birreria remains open rain or shine.

The roof's pitch enables rain to flow into a gutter system that winds into a drain at one end. Laid out in grids, it also opens manually in nesting sections.

"When you start to consider a retractable roof, you have to buy into the module of the system and the ability of the system to span your space," says Alec Zaballero, design principal with Manhattan-based TPG Architecture LLP, the firm responsible for Birreria's design. "In the Birreria space, the entire 4,500 square feet of space is covered by the roof, so we had to do it in 3 spans. All of these systems rely on rails, and those rails are bearing the entire weight, not only of the roof but also of the weather. We think of these glass roofs as being airy and kind of light, but they're not."

The architectural team required city permits to build and install the system, and a structural engineer had to sign off on the project once it was complete. Designers chose a brewery warehouse aesthetic because they needed the structural support to bear the retractable roof panels.

"We went in and immediately worked with the manufacturer to establish the roof modules because that drove the rest of the planning exercise," Zaballero says. "For example, you don't want a column to be in the middle of your bar or seating area, so the roof becomes the determining [design] factor. Once the system can fit into the space, we need to know what are the physical components because it all has to be structurally rated. For Birreria, all the steel had to go on the roof before anything else. If you're considering a retractable roof, consider the module and structure to support it. In New York, outdoor dining space is at a premium, and rooftop restaurants are attractive and cool. It's an amazing space and would be a mistake
to enclose it." 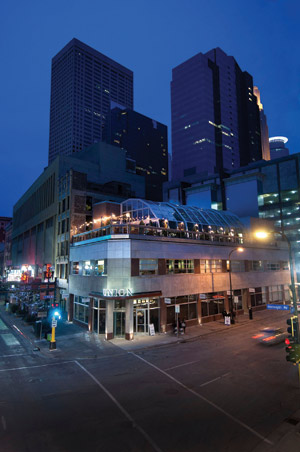 The owners of Minneapolis-based Union Rooftop Restaurant were preparing to install a retractable roof when the team discovered the wheels on the system were unable to carry the weight of the rooftop. So the company had to install new wheels to handle the load.

The rooftop restaurant occupies 6,000 square feet of space with 5,500 square feet under the retractable roof. It is said to be the largest retractable rooftop space in North America. "The challenges were enormous," says Zach Sussman, director of marketing for the restaurant's parent company, Kaskaid Hospitality. "It was created in Germany and shipped over here piece by piece. It had never been installed in this scale and this size. The building itself did not have a rooftop on it. We added a story to the building and then a patio on top of that. It was an enormous investment on the HVAC side."

The roof was part of the initial Union design — in fact, the restaurant was developed around it — despite the original building's lack of a rooftop suitable for restaurant use. The Union concept came together as an opportunity for Kaskaid to develop one of Minneapolis' historic downtown buildings. Union provides a three-level restaurant experience with a nightclub in the basement, Union Fish Market on the main floor and Union Rooftop on top.

"The idea behind a glass-enclosed restaurant in Minneapolis was a no-brainer," Sussman says. "We have limited outdoor time available in the Twin Cities, and people really gravitate toward rooftops."

Kaskaid also operates Crave, another downtown Minneapolis restaurant about one block away from Union. While Crave also features a rooftop for dining, the restaurant categorizes the uncovered area as patio use, which makes events contingent on the weather. Additionally, having uncovered patio space makes staffing difficult because Crave management either has to cut or call in patio staff based on weather. "Having the retractable rooftop makes staffing issues obsolete," Sussman notes. Maintenance on the roof is minimal, Sussman adds, and it can open and close in less than five minutes.

To capitalize on the momentum created by Union Rooftop, Kaskaid Hospitality is building another restaurant concept, Boneyard, which will feature an outdoor dining experience. This time, the company is using a retractable awning to cover its outdoor patio space.

For some operators looking to invest in patio spaces, retractable or louvered awnings have been a viable answer. While restaurants can open or close them according to the weather, louvered awnings do not retract in the same way as a roof, because the louvered awnings never fully open. Awnings also can be added after construction whereas retractable roofs need to be part of original design plans.

"It's not for year-round use, but the thinking is the same. It's an opportunity to extend the outdoor dining experience into the fall and then again in the spring," Sussman notes. "The awning is no big deal in terms of cost, setup and logistics. And it's much more mainstream in terms of the technology."

Boneyard's patio features ambient heating delivered through coils in the floor and awning side panels that can roll up or down. By contrast, retractable rooftops consist of a series of glass and metal panels that roll into each other. And while retractable roofs become part of a restaurant's overall design, operators can add the awnings to create usable outdoor space that might otherwise go unused.

"Restaurant operators may use awnings because they want the option of expanding their seating," says Michelle Bushey, design director for Irving, Texas-based ID Studio 4. "Operators can take that space and use it as a patio or additional seating during the colder months. If the restaurant is busy in the middle of December, operators can put heaters on the patio and have additional seating. It's a great way to expand seating capacity, make more money and make customers happy."

Bushey worked on the addition of retractable or louvered awnings for Boston's Restaurant & Sports Bar, which gives franchisees the option to include the awnings in their restaurant designs. So far, two locations have installed the patio feature. 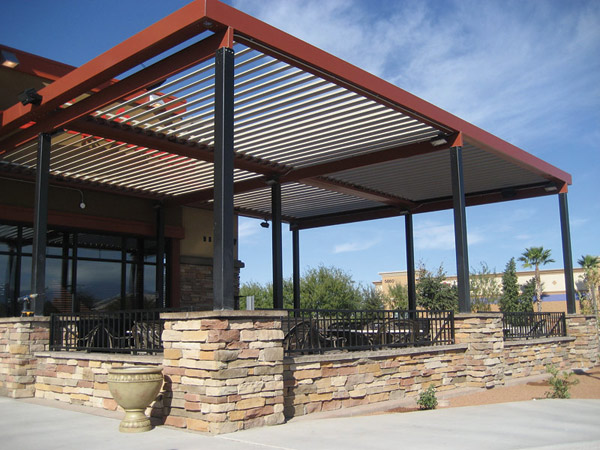 Michael Velasco, Boston's construction project manager, says the company is moving toward a hard-shell top so the awnings have a standing seam and standing roof that can accommodate heaters, lighting and electricity. "The patio space itself is created when we design the location. Once we have the square footage down, it is presented to the awning or manufacturing company to build it into the space," he says. "The process takes about an eight-week lead time. There aren't any specific challenges surrounding the awnings; the main thing is getting the design nailed in the beginning and to make sure everyone is on the same page. We have power in the patio anyhow, but that would be the only thing we have to make sure is available."

Similar to the retractable roofs, awnings require minimal maintenance because they feature built-in gutter systems. "It's pretty much maintenance free," according to Velasco.

When it comes to the installation of retractable awnings, many restaurant operators look to have the best of both worlds: an open-air feature when it's sunny and a covered space during times of rain.

"Retractable roofs would be for the inside space where they can open up the inside space to the outside," says Todd Hatch, a designer with Costa Mesa, Calif.-based Hatch Design Group. "It's something that definitely has to be planned and is a lot bigger deal than a trellis or retractable awning. One downside is that retractable roofs will be more money. If you have a building with a typical patio, you can build a more intentional architectural trellis and put retractable awnings on it. Then, it's really up to the management and ownership to use it and not just keep it closed."

While retractable awnings have provided cost-effective ways to let the sun shine in, for the developers of Andaz San Diego, Birreria and Union Rooftop, the benefits of having retractable roofs far outweigh the costs.

"Union Rooftop is a jaw-dropping space with views of the Minneapolis skyline when it's snowing or raining," Sussman says. "The retractable roof puts guests in the elements and
creates that intimate experience with nature."

Despite low maintenance costs for retractable roofs, restaurants need to weigh plenty of other operational considerations. For example, the decision to enclose a terrace means operators must decide how they will heat and cool the area and meet jurisdictional fire codes.

Alec Zaballero, design principal with Manhattan-based TPG Architecture, says spaces under retractable roofs are not easy to cool due to the "greenhouse effect" from sunlight passing through the glass and heating the space below. This means that for spaces such as Birreria, a rooftop restaurant on Eataly's 15th-floor patio in New York City, controlled heating and cooling become difficult. "Along with the HVAC system, the owners had to put in some umbrellas in the summer so they can shade the space. In the winter, the space picks up solar heat so they have to crack the roof open," Zaballero says.

Additionally, when Zaballero first started the Birreria project, the idea was to have a mechanized retractable rooftop system; however, it was later decided to use a manual system to open and close sections of the roof to alleviate future mechanical problems. Manual systems do, however, require occasional lubrication of track systems.

While the use of retractable roofs started on the East and West Coasts, Chicago is starting to lead the trend because of its architectural diversity — and its short outdoor dining season. If you’re headed to the National Restaurant Association show in Chicago or find yourself in the Windy City for other reasons and have an interest in retractable roofs, do some field research while you’re there. Here are three spots to check out.