Located in Riverdale Park, Md., Banana Blossom Bistro is a Vietnamese fast-casual concept with an open kitchen and a display production line. The restaurant is owned by the husband and wife team of Phil and Annie Esguerra and was designed by GTM Architects out of Bethesda, Md.

Banana Blossom Bistro is designed to be a warm, welcoming space, according to Traci Weems, an associate with GTM, where everyone — from a family out for a meal to coworkers enjoying happy hour — can gather. This ambience is achieved partly through the combination of colors and materials that fill the space, from the wood-style tile flooring installed in a chevron pattern to the warm red paint on the walls.

Like so many projects, some of the results were serendipitous. “Some of our concepts had a parquet floor but with the tile it was easier to do a chevron. I think that works better because parquet would have been another level of pattern and could have been too busy. The chevron was a nice compromise,” Weems says.

Warmth wasn’t the only goal of the design. The space is influenced by both Vietnamese and French culture (reflecting the influence of the French-Vietnamese fusion menu). Due to that influence, the restaurant has some elements are commonly found in rustic Parisian bistros. These include cane-backed chairs in the private dining area as well as a penny tile inlay in the main dining area.

The banana leaf, common in Vietnamese cooking, inspired many other elements, including the plantings on the tables, potted plants throughout the space, and even the chalkboard art on the menu board. 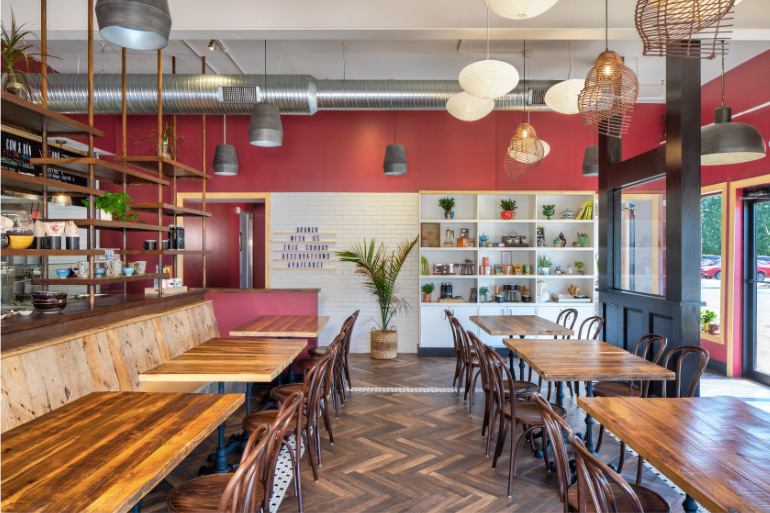 Shelving displays play a big role in the design of Banana Blossom. A unit that is attached to the ceiling separates the ordering line from the dining area, while another sits in the dining area itself, against a white brick wall with a social media-friendly message board.

These displays, says Weems, are used to showcase branded goods for sale, like coffee cups, as well as items like Vietnamese candy and snacks. Other items include Vietnamese pottery and works from local artists and artisans.

The reliance on local is in fact another theme of Banana Blossom’s design. In addition to the locally made artwork, the restaurant’s banquette and tables are made by a local amateur woodworker Annie Esguerra met during construction. Most of these tables are floating units, Weems notes, making it easy for the operation to accommodate parties of any size. 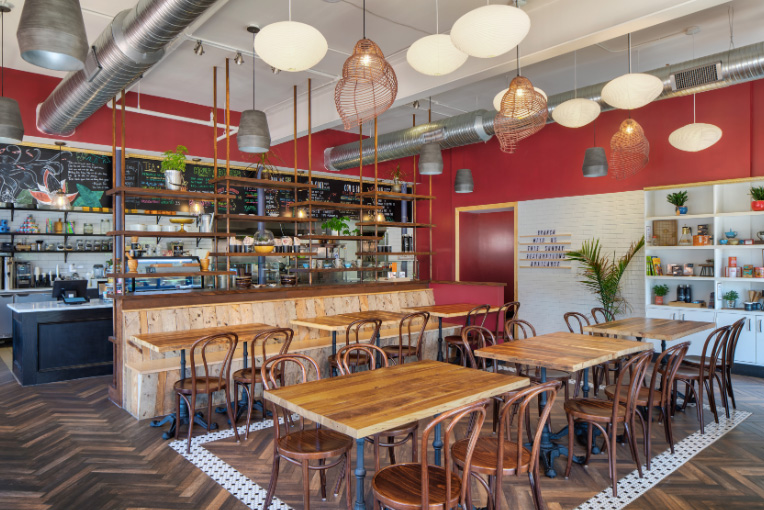 Many other design choices at Banana Blossom can be seen overhead. The restaurant’s ceiling is unusual in that it is dropped and features exposed ductwork. According to Weems, this was a compromise between what was allowed by the various local inspectors and authorities and the owners’ desire for some industrial elements.

“The space was very rugged/industrial looking before [Annie] built it out… She wanted to have the exposed ceiling look, but we couldn’t leave it exposed, so we put in the drywall ceiling and the stainless-steel ducts to give it the feeling of industrial,” says Weems.

Also overhead are the restaurant’s light fixtures, which include Vietnamese paper lanterns. 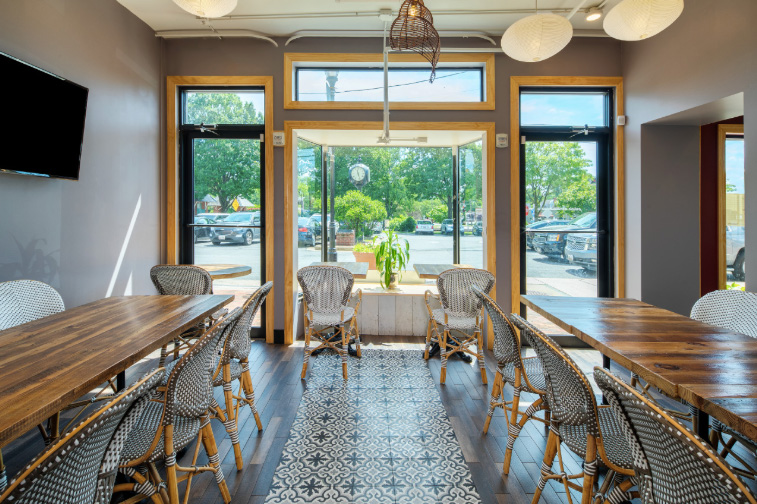 In addition to the main dining area, the restaurant offers guests a private dining space. Here guests find most of the bistro-style cane back chairs, along with a tile from Vietnam that “brings a pop of color to the wood,” says Weems.

Additional wood elements in this space include the framing for the doors and windows. These were added to offset the removal or covering of exposed wood in the original space, Weems says, and also add a bit of extra warmth and visual interest to the restaurant.