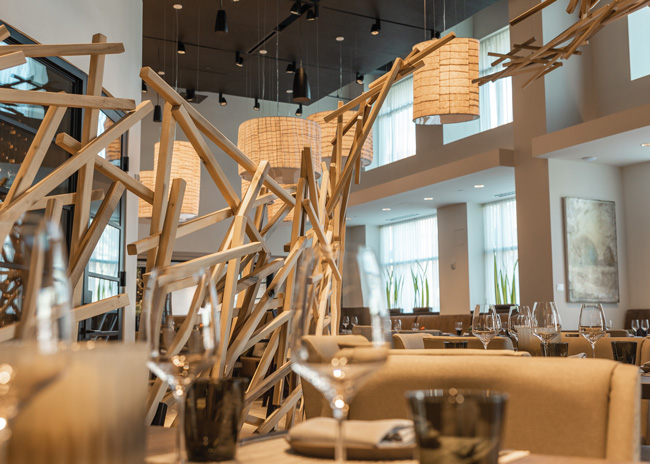 Art at Peppervine changes with the seasons and reflects the restaurant's seasonal menu. Images of Peppervine courtesy of Blake Pope PhotographyArtwork in restaurants is often an afterthought, added to finish off the space or provide a local flair, but for some restaurants, art is part of the central vision for the space, included in plans from the beginning and as integral to the ambience as the food and furniture.

From projected art to murals to carefully curated art collections, dining establishments are experimenting and exciting guests by doing something different.

Diners at Peppervine don’t have to worry about the same old view if they take their usual seats because the art on the walls of the venue is always changing.

This restaurant, which opened in March, dishes up a rotating menu of art — in partnership with local Shain Gallery — with a goal to reflect the seasons and the seasonal food that’s served.

“We are expanding the art of food into other elements of the experience. It freshens up the restaurant every few months,” says Partner Bob Lackey. “We work with a florist, too, to ensure the flowers pull colors from the artwork. Consumers get very bored with restaurants; they want them to be new, and changing the aesthetics is pretty exciting.”

There are typically six to eight large paintings in Peppervine, and while they don’t have a specific theme, they’re generally connected by color. “It’s all about the colors; they really can change the mood and feel of the restaurant,” says Lackey.

Changing the art “brings an element of trust from our guests into the whole process of being creative,” Lackey adds. “It plays into the whole experience. Customers trust that we will give them a great place to go and realize we do everything right.”

Borrowing the art from Shain Gallery doesn’t have a direct cost, Lackey says, but there are “compensation methods,” such as free meals for those involved and the ability for the gallery to hold events at the restaurant. Otherwise, all he pays is an installation fee three to four times a year.

Besides the ever-changing ambience of the restaurant, altering the artwork also gives Peppervine a chance to please its customers and make an impression. “People have different tastes in art, like they do in food. The challenge is to make it wonderful for all your customers, and we’re giving them different experiences.” 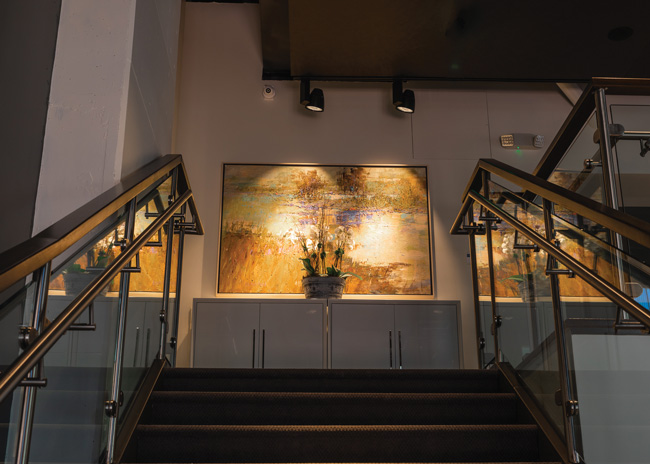 Lackey makes sure the art is never anything too complicated or controversial. Colorful art seems to be the most popular with guests; while conversely, “stagnant, more traditional images are not called out often,” he says.

“Seasonality, theme, impact, uniqueness and size all play into our art selection choices,” Lackey says. “But the emotional impact we are trying to achieve is based a good deal on personal preference, so we try to solicit input from several people.”

Art at Peppervine changes with the seasons and reflects the restaurant's seasonal menu.
Images of Peppervine courtesy of Blake Pope Photography

Each Black Tap location has unique murals and art installations, like this one in Herald Square in New York City. Images of Black Tap courtesy of the restaurant. 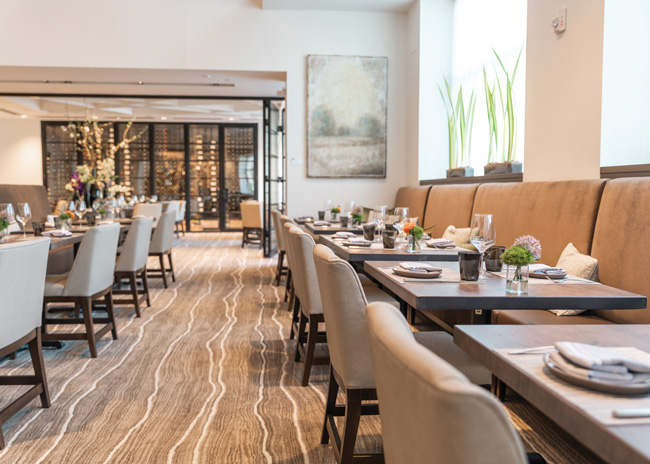 When Black Tap opened its first location in New York City’s SoHo neighborhood in March 2013, it was important that it be imbued with a sense of the city.

Julie Mulligan, co-owner and director of Design and Development, commissioned local artist Fumero to create a mural for the stairwell, which can be seen from both the outside of the restaurant and the cellar dining area.

The art was intended to “bring energy to the space,” Mulligan says. “We thought of it as an opportunity to work with a local artist. The art was the opportunity to bring people inside and show what we were doing.” Fumero, she explains, is well known in New York, and his art is very recognizable.

When Black Tap opened its second location, it wanted something similar. This restaurant, in Midtown Manhattan, features two murals by Bradley Theodore: Two different Marilyn Monroe murals face each other, and there are other murals on exposed columns in the space. “We wanted to stay true to our downtown New York roots and work with local artists,” Mulligan explains. 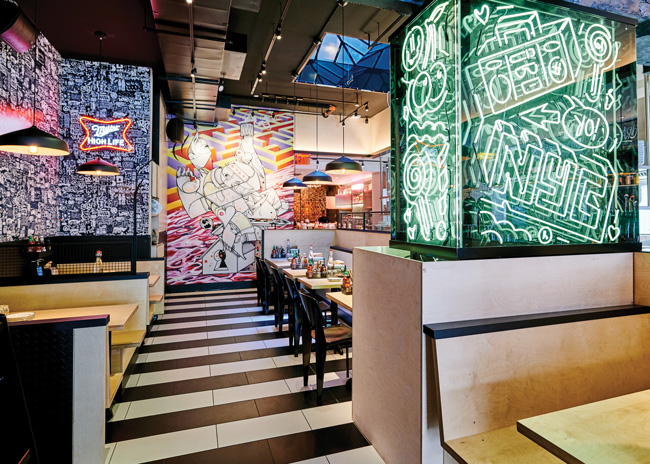 Each Black Tap location has unique murals and art installations, like this one in Herald Square in New York City. Images of Black Tap courtesy of the restaurant.

Black Tap continues to use murals throughout all of its locations — of which it now has 14 worldwide (5 of them stateside) — even as it has expanded to countries such as the UAE, Singapore and Switzerland.

In Anaheim, Calif., Black Tap designed a very different location, aimed at the Disney crowd. This location is much more colorful — most others are predominantly black and white — and features work by Jason Woodside, a local street artist who studied and practiced art in New York City before moving to Orange County.

“He’s done a lot of work on beaches and surfboards and really taps into Orange County,” Mulligan says. “He uses a lot of colors and is about bringing joy to the world, which works really well for Disneyland. His art is colorful but abstract, which felt like the right fit.”

Black Tap’s murals, which are intended to be permanent, are included to add energy and impact to each location. Their scale, and the fact that they’re not covered by glass “adds a very different energy,” Mulligan explains. She wants there to be a certain amount of freedom and creativity in each location and says the inspiration for the artwork “is rooted in the collaboration of Warhol and Basquiat — the pop art elements of Warhol and the freedom of Basquiat and how that meets New York City street art culture.” Pictures of both artists grace each restaurant. 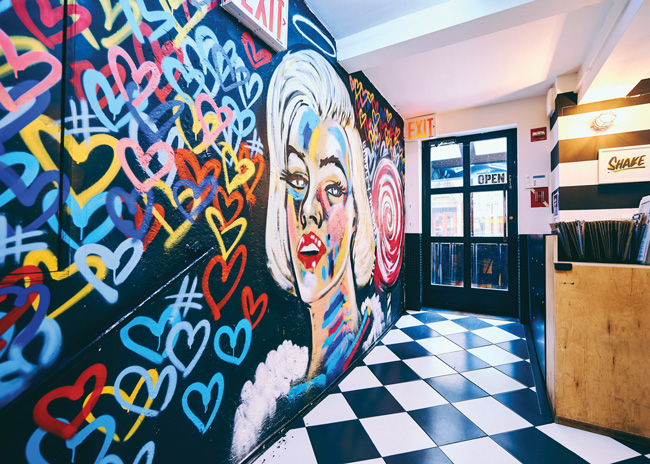 And Black Tap works with artists who have a “transitional graffiti style.” Before they create their art, Mulligan and her team give artists a briefing of the brand “and the bigger picture goals we have besides serving food every day,” she says. “And we talk about the colors we work with, and some of our designs, and make sure they’ve seen some of the things we’ve done before. But at the same time, we want to make sure they can express themselves — their unique point of view and style of art.”

Black Tap’s newest location is in New York’s Herald Square. For this location, the brand commissioned twin brothers, HOW and NOSM, for their street art murals. They were asked to design two walls. For one, they were given complete freedom, and for the other, Mulligan gave them direction.

The end result is one wall that is mostly black and white, an abstract drawing on top of a colorful but abstract background. The other is fully saturated with color, with the same abstract figures. The brothers received guidance on the latter. This, says Mulligan, “shows off their breadth of talent and their range. Both pieces are excellent, and seeing them together is even more impressive.”

The pop art of Warhol and Basquiat inspires the murals at Black Tap, including this one in Midtown Manhattan. 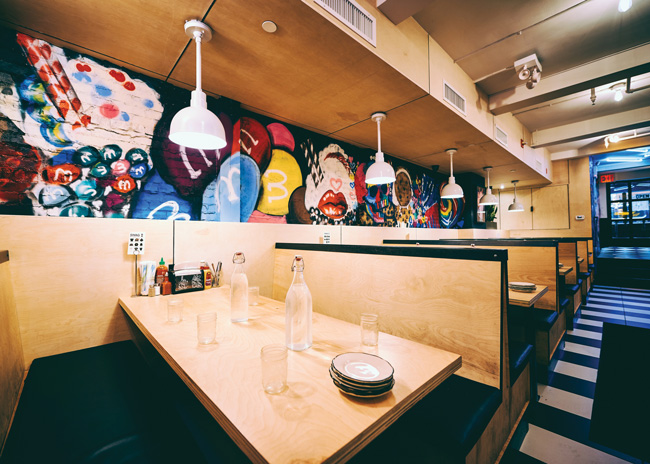 The pop art of Warhol and Basquiat inspires the murals at Black Tap, including this one in Midtown Manhattan.

Here, images are projected and featured for around 45 minutes; then, they gradually dissolve over 3 minutes into the next picture, so three to four are offered nightly.

The artwork that’s featured is designed to work with the changing light in the restaurant as afternoon turns into evening.

“We want to evolve the feel of the space over time,” says General Manager Simon Stilwell. “We have a bright image on the wall to match the brightness of the light coming in early in a shift, but what works at 5 p.m. is overwhelmingly bright at 8 p.m. So, the images are set to get progressively darker throughout the evening, to maybe a night sky or a black-and-white image to match the restaurant’s ambience. This greatly affects the energy of the room, and it’s fun to see people’s faces as it changes.”

The projected art is the first thing guests see as they enter the restaurant. Originally, Stilwell thought of painting a mural but is happier with the projected art because, he says, “it gives us the option not to be locked into a mural we might not like in a year.” 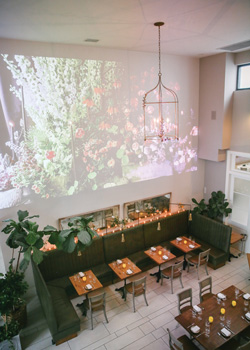 The ever-changing art in installation at Wild Common is 20 feet by 12 feet. Image courtesy of Lucy CuneoWild Common works with a local creative consulting firm, KL Creative, which provides it with the modern equivalent of a mix tape (in fact, they provide digital files). Each file contains the images for one evening, though Stillwell repeats the most popular ones. He also selects which ones to show depending on the weather. “If it’s a beach day, we’ll have something bright; if it’s a grayer day, we’ll have something more muted,” he says.

Sometimes, the images just don’t work out, he explains. To date, since the restaurant opened in March, there have been only two flops. One featured a flower arrangement, which customers perceived as funereal. And a second was a still life of food, which viewers said wasn’t indicative of Wild Common’s food. “The great thing is, we can change them,” Stilwell says.

The wall featuring the projected images is visible from every seat in the restaurant “so you can see the light and energy in the room change,” Stilwell says. “We have many windows, so when it gets dark, they are mirrors that reflect the artwork, so you see it differently.”

A secondary but important benefit of the projected artwork is the versatility it brings to private events. Personal images can be projected for a wedding celebration or business products for a company meeting, for example.